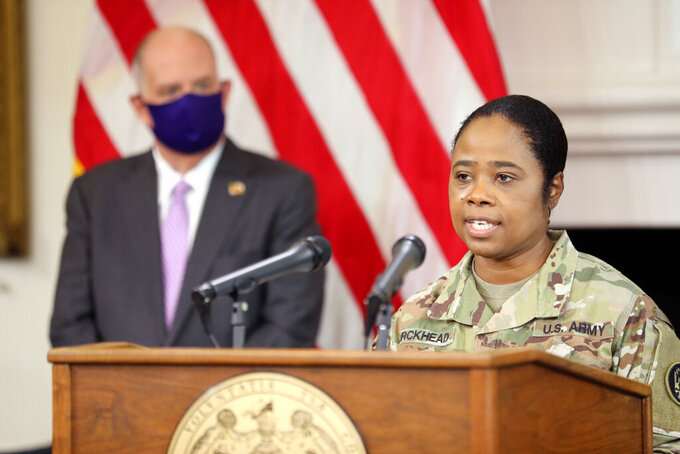 “We’re not where we need to be with the Black community or the Hispanic community, and so we’re continuing to take every effort to ramp that up," Hogan said at a news conference in offering new steps to improve on distribution efforts.

“We will continue to work with community leaders to find what approach works best, as they know best what works in their community," Birckhead said.

The governor’s office also announced plans for the state’s Vaccine Equity Task Force to partner with the First Baptist Church in Glenarden and University of Maryland Capital Region Health to establish a large, community focused-vaccination site in Prince George’s County in Upper Marlboro.

In Prince George's, a majority-Black jurisdiction in the suburbs of the nation's capital that has had the highest number of COVID-19 cases in Maryland, only 10% of about 32,000 vaccinations at a mass vaccination site had gone to county residents, Prince George's County Executive Angela Alsobooks told state lawmakers Wednesday.

“I could use words to characterize what that feels like to us — that it is unfair, that it is outrageous — but I think the numbers speak for themselves: 90% of the vaccinations at a vaccination site in our county have gone to residents who do not reside there," Alsobrooks said.

The county executive has asked Hogan to set aside days of the week only for county residents to be vaccinated at the mass vaccination site at Six Flags.

Hogan said his administration will work with the county executive and adjust plans as the state can.

“We are reserving a certain percentage of slots at Six Flags every day," Hogan said. "With the increasing supply of doses, perhaps we can make adjustments.”

Baltimore Mayor Brandon Scott also is asking Hogan to reserve appointments for residents at a mass vaccination site in Maryland's largest city. Hogan angered city officials last week, when he said Baltimore had received more vaccine doses than the city was “entitled to," when asked about Scott's request that a certain percentage of vaccines at a mass vaccination site be reserved for city residents.

The Baltimore Sun reported Thursday that while Maryland sent more vaccine doses to Baltimore than any other jurisdiction for the first 11 weeks of vaccinations, about three of four of those doses went to the city's 11 hospitals, where many employees who live outside the city were prioritized for shots.

Fewer than 40% of the vaccines allocated to Baltimore went into the arms of city residents, the newspaper reported.