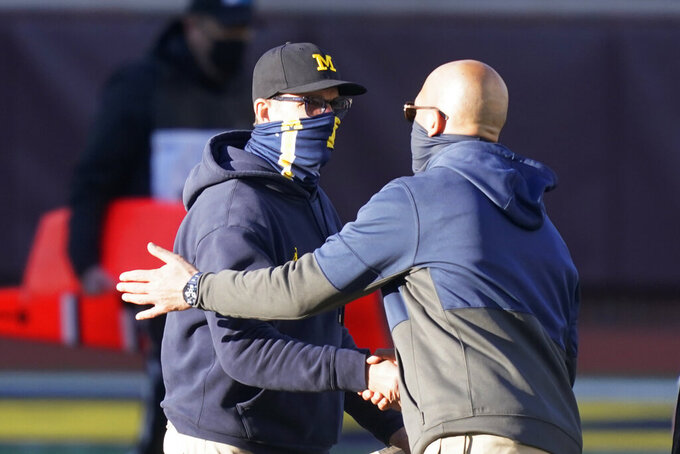 Manuel spoke hours after Michigan's game against Maryland this weekend was canceled because of an outbreak of COVID-19 in the Wolverines' program. The outbreak could also threaten Michigan's annual rivalry game against Ohio State on Dec. 12 — and the Buckeyes' chances to play for a Big Ten title.

Ohio State had to cancel its game last week at Illinois because of a spike in COVID-19 cases in its program. It was the second game the Buckeyes (4-0) have lost from their regular-season schedule. One more would leave them unable to reach a conference-mandated minimum to be eligible for the Big Ten championship game.

Earlier this week, ESPN analyst and former Buckeyes quarterback Kirk Herbstreit apologized after saying he thought Michigan would wave a “white flag” and potentially avoid facing the Buckeyes, who would be heavily favored in their matchup with the Wolverines.

In a video released by Michigan, Manuel fired back, although he didn't mention Herbstreit by name.

“I think it’s ridiculous,” Manuel said. “I have to pause because my words, the anger — I was infuriated by the insinuation that Michigan would do anything other than play a football game. We’ve been playing this game since 1879 — 1879 — and we’re the winningest program for a reason. Because we play whoever’s in front of us. And the only way we want to keep anybody from moving on is to beat them on the fields of play. And to insinuate that, to say something other than that, is a statement by a fool."

“I can’t tell you how embarrassed I am for the Big Ten Conference, to have one of their representatives who played this game, to say that about any team in this conference,” Manuel said. "And to say it about college football and the student-athletes around this country who are trying to play games during a pandemic — it is ridiculous and sad.”

For Maryland (2-2), it was the third time a game has been canceled this season. Matchups against Ohio State and Michigan State were wiped out last month after the Terrapins had 23 positive tests for COVID-19, including coach Michael Locksley.

Maryland has played only one game since defeating Penn State on Nov. 7, losing last week at Indiana. The Terps are scheduled to wrap up the regular season Dec. 12 at home against Rutgers.

Elsewhere, there was uncertainty Wednesday night about whether one of the games of the week would be played. No. 25 Liberty faces No. 14 Coastal Carolina, but a person with knowledge of the situation told The Associated Press that No. 8 BYU officials have spoken with Coastal Carolina officials about coming to Conway, South Carolina, on Saturday if COVID-19 issues keep Liberty from playing.

The person spoke to AP on condition of anonymity because no deal has been made as Liberty is still hoping to be ready to play.

“Our focus and intention remain on preparing and playing Liberty University on Saturday and showcasing our University and campus to the college football world via ESPN College GameDay,” Coastal Carolina said in a statement. “There are no changes or adjustments to that schedule and both schools are still completing weekly COVID-19 testing protocols that would impact any game decision.”

So far, eight games scheduled for this weekend have been postponed or canceled, including Washington State at No. 17 Southern California, which was pushed back from Friday to Sunday.

Kent State at Miami University in the Mid-American Conference and Boise State at UNLV in the Mountain West were also canceled Wednesday.

Mississippi also suspended team activities in football Wednesday, though the Rebels have an open date this weekend. Coach Lane Kiffin said the team could return to the practice field after as little as a one-day hiatus.

“We’d be able to play as of right now, with no more” positive tests, Kiffin said.

The Rebels still have games to make up against Texas A&M and LSU.