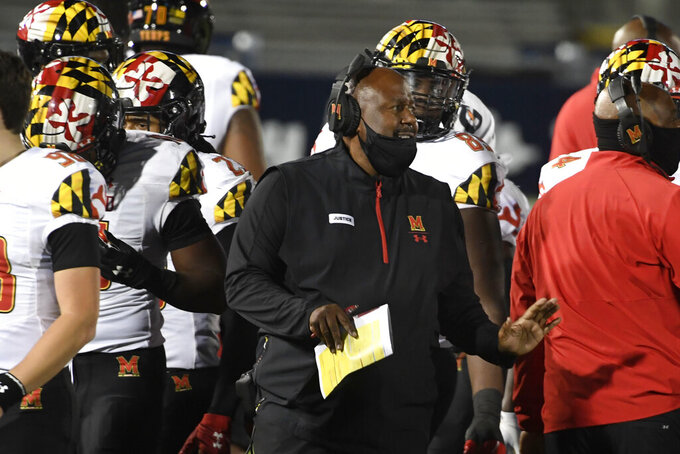 The Big Ten game between Maryland and Michigan State was canceled Thursday after a COVID-19 outbreak on the Terrapins resulted in a positive test for coach Michael Locksley.

Locksley tested positive for COVID-19 on Wednesday and is isolating at home.

“I am gutted for our team and for our fans,” Locksley said in a statement. “This team is eager to play and compete and continue the growth we’ve seen this season. This virus is testing our players and coaches right now, but I have no doubt that we will emerge as a stronger unit for having gone through this together.

“As for me personally, I am feeling strong, with only minor symptoms. I will continue to lead this program virtually and our game preparations for Indiana (on Nov. 28) will begin immediately.”

Over the past seven days, 15 Maryland players have tested positive. There were seven positive cases among staff over that same time period.

Later Thursday, the Mountain West announced San Jose State at Fresno State was canceled because of COVID-19 cases and contact tracing with the Bulldogs.

That is the third Mountain West game this week to be called off, joining Utah State at Wyoming, and UNLV at Colorado State.

Overall, 16 out of 62 games involving Bowl Subdivision teams scheduled for this week have been called off. Last week, 15 of the 59 games scheduled were not played.

The game, originally scheduled for Nov. 14, was postponed due to problems in both programs with positive COVID-19 tests and contact tracing. The game was rescheduled for Dec. 12 before being pushed back two days to the Thursday night date.

DePaul canceled its first three games because of a COVID-19 outbreak within the program, the school announced Thursday. The Blue Demons paused all activities and called off games against Western Illinois, Chicago State and Alcorn State, pushing back the season opener to Dec. 6 at Iowa State. The school would not identify those affected.

“Flexibility and patience will continue to be paramount this season as we navigate these unique times,” athletic director DeWayne Peevy said in a statement.

St. Bonaventure and Albany also paused men’s basketball because of COVID-19 issues, and both teams canceled plans to play in the Mohegan Sun “Bubbleville” games starting next week in Connecticut.