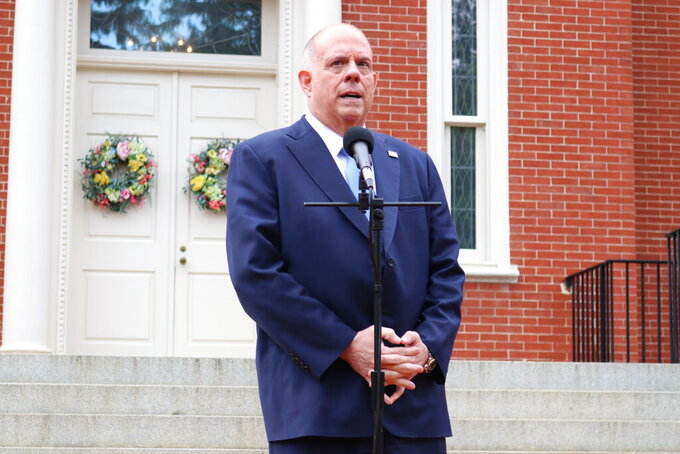 Maryland Gov. Larry Hogan talks to reporters at the governor's residence on the last day of the state's legislative session on Monday, April 12, 2021 in Annapolis, Md. Hogan, a Republican, praised bipartisan cooperation on pandemic relief legislation and on an agreement on how to allocate $3.9 billion in federal relief. (AP Photo/Brian Witte)

ANNAPOLIS, Md. (AP) — Maryland lawmakers have adjourned their legislative session that focused largely on COVID-19 recovery, expansive police reforms and longstanding disparities that have been worsened by the pandemic.

“I think one of the biggest lessons that we’ve seen from this pandemic is that the gaps that existed in our society — the racial gaps, the wealth gaps, the foundational breakdowns of our social contract — they existed before the pandemic, but they were put on wide display, on a billboard, for just how bad these gaps are," Ferguson, a Baltimore Democrat, said.

With top-priority legislation on economic relief and police reform already passed earlier in the session, lawmakers approved a measure to implement sports betting. Maryland voters approved sports betting in November with 67% support. Sports wagering could begin as soon as the fall.

It allows sports wagering at casinos, the stadiums where the state's three professional sports teams play and horse racing tracks. The state also would allow 30 licenses for businesses that want to offer sports betting and up to 60 more licenses for online betting. The number of licenses represents a compromise, after the Senate proposed lifting caps. The state expects to raise between $15 million and $19 million annually that would be used to help pay for education.

“The most successful, biggest progress we had, I would say is the RELIEF Act, which was our number one priority during this pandemic,” Hogan said, noting tax breaks that helped small businesses.

Hogan, a Republican, also underscored bipartisan agreement on how the state will allocate $3.9 billion in federal pandemic relief.

The state's pandemic relief plan expands a tax credit for low-income residents by an estimated $478 million over the next three tax years. Lawmakers also passed a bill to extend the tax credit to include immigrants, including some living in the country illegally, who work and pay taxes in the state.

The General Assembly, which is controlled by Democrats, passed a measure that would prohibit local jails from entering into agreements facilitating immigration-related detentions. Hogan told reporters he would veto the legislation if it passed.

Lawmakers passed an extensive package of police reform measures earlier in the session. It includes repeal of police job protections in the Law Enforcement Officers Bill of Rights, a statewide use-of-force policy, limits on no-knock warrants and an expansion of public access to records in police disciplinary cases. Hogan vetoed those measures, but the legislature overrode the vetoes Saturday.

Lawmakers also voted for legislation to settle a 15-year federal lawsuit over inequitable funding at the state’s four historically Black colleges and universities for $577 million. Hogan has signed the measure, after having vetoed it last year citing economic difficulties created by the pandemic.

Earlier in the session, lawmakers overrode Hogan’s veto from last year of a sweeping 10-year plan to improve the state’s K-12 schools, which is known as the Blueprint for Maryland’s Future. At the heart of the plan to improve education in Maryland with billions in added funding is the goal of addressing inequities in schools that serve high numbers of children in poverty.

They also passed a bill this year to revise the plan to adjust for learning loss due to the pandemic, including more tutoring and money for digital devices.

“Maryland has long been a leader on voting rights. We’re just continuing that tradition, but I think the 2020 election showed that voters like options, so you’re seeing us pass legislation to make sure they have options to cast their ballots," said Del. Eric Luedtke, a Montgomery County Democrat.