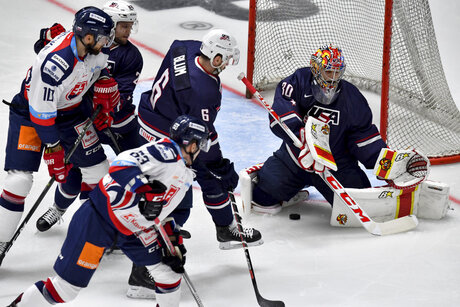 By: STEPHEN WHYNO (AP)
GANGNEUNG, South KoreaCopyright 2020 The Associated Press. All rights reserved. This material may not be published, broadcast, rewritten or redistributed.
37.7556128.896

GANGNEUNG, South Korea (AP) — Ryan Zapolski didn't start playing goaltender until he was 12, didn't get a scholarship offer and wasn't drafted by an NHL team.

So it doesn't bother him that he goes into the Olympics as a player not a whole lot of people have heard of. Zapolski lacks the name recognition and NHL experience of Canada's Ben Scrivens, Sweden's Jhonas Enroth or Finland's Karri Ramo, but the 31-year-old from Erie, Pennsylvania, is the United States' best hope to contend for a men's hockey medal.

"It's something I'm pretty proud of in my career, always having to work a little bit harder than the next guy to get the chance and taking advantage of every opportunity I had. This is just another great opportunity for me," Zapolski said. "My position is obviously the most important position, I think, in the tournament. You have to have a goalie that's playing well to have a chance."

Zapolski has been one of the best goalies in the Kontintenal Hockey League this season, going 23-11-4 with a 1.73-goals-against average and .932 save percentage. And if he plays like that, the U.S. will have a real chance. He was so good during Jokerit's franchise-record 15-game winning streak last fall that he started 14 consecutive games and showed what he has the potential to do at the Olympics.

"He can get hot, and he knows how to play," U.S. and Jokerit teammate Matt Gilroy said Sunday.

Zapolski understands he's not a household name back home, and the bearded mystery man embraces it. Last month was the first time someone told Zapolski they'd never heard of him, but after walking on at Mercyhurst College and never having played a North American professional game above the ECHL, it didn't irk him.

"I know I wasn't a big prospect or anything," Zapolski said. "It took me a little bit longer to kind of make it. I'm making a name for myself a little bit older, but that's OK with me."

European fans and players know Zapolski, who is a KHL All-Star with a reputation for consistency and the ability to step up when it matters.

"The bigger the moment, the better he plays," said Brian O'Neill, another U.S. teammate of Zapolski's with Helsinki-based Jokerit. "Extremely calm, performs well under pressure and that's the biggest thing in a tournament like this. High-pressure situation, that's really not going to faze him. He's extremely prepared for this."

Coach Tony Granato knows but hasn't yet told Zapolski or the other goalies — Brandon Maxwell and David Leggio — who is starting the opener against Slovenia on Wednesday, but the smart money is on Zapolski. Late general manager Jim Johannson's first call last summer to Granato about a potential player was regarding Zapolski, who raised his level even more since getting on the Olympic radar.

Granato liked what he saw on video so much that he didn't need to play Zapolski much at the pre-Olympic Deutschland Cup in November because he knew he'd be on the roster.

"If your goalie's nice and calm and confident and relaxed back there, your team plays like his personality in a lot of different situations," Granato said. "That's one of the other things that we really liked from a staff perspective as we watched him all year is his calmness. He's deserved this opportunity to make this team."

Zapolski makes teammates calm and confident. Already, forward Chris Bourque sees him as a goalie who plays his angles well, is rarely out of position and can make up for mistakes, something veteran Jim Slater witnessed up close at two Deutschland Cups.

"Not only can he make the first save, he can make the second and the third," Slater said. "He can make that game-changing save that can turn the tide of a game."

If that sounds like another late-blooming American goaltender who plied his trade in Europe before going on to NHL stardom and the Stanley Cup, Zapolski will take it. Tim Thomas also starred for Jokerit before sticking in the NHL with the Boston Bruins at age 31, and that example gives Zapolski hope that he can follow after his two-year contract extension in Finland expires after the 2019-20 season.

"He's a guy that I've kind of looked up to, kind of modeled my career after," Zapolski said. "There's still that possibility. Of course I want to play in the NHL. That's a dream, I think, still for anybody just to play there, so we'll see what happens after this contract."