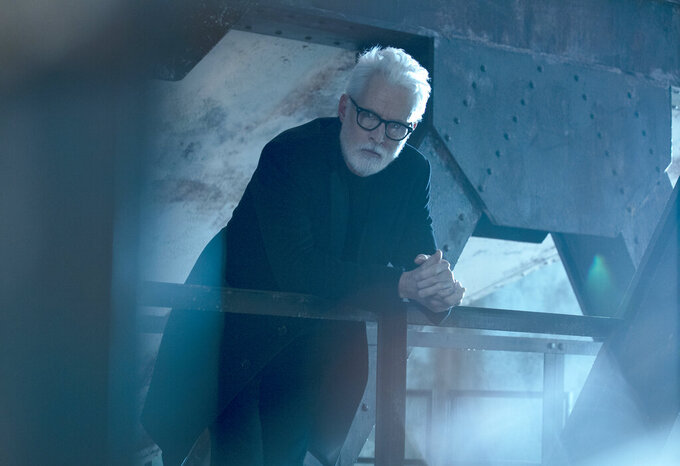 This image released by FOX shows John Slattery in a scene from "NEXT," premiering this fall on FOX. (Miller Mobley/FOX via AP)

LOS ANGELES (AP) — “The Masked Singer,” an artificial-intelligence thriller and a prime-time soap opera starring Kim Cattrall will be part of Fox's fall lineup, the network said Monday as it unveiled its schedule amid the pandemic's disruption of the TV industry.

Cattrall's “Filthy Rich,” about a Southern family’s inheritance fight, and the AI drama “neXt” starring John Slattery were to have bowed this spring and had each completed 10 episodes. Moving the shows to the 2020-21 season gives Fox fresh fare despite uncertainty about when or how the virus-forced Hollywood production shutdown will ease.

Fox's fall schedule also will include “L.A.’s Finest,” the Gabrielle Union-Jessica Alba police drama that originated on cable, and the third installment of “Cosmos” hosted by astrophysicist Neil deGrasse Tyson and made in partnership with National Geographic Channel, which aired it earlier this spring.

“Bob’s Burgers” has been renewed for its 11th season and will be part of Fox’s Sunday night animated line-up set to include the 32nd season of “The Simpsons,” the network said.

Fox included football broadcasts on its fall schedule, despite the uncertainty that COVID-19 also has brought to sports.

The midseason that begins early 2021 will bring “Call Me Kat,” a new sitcom starring Mayim Bialik and which she’s producing with Jim Parsons, her onetime “The Big Bang Theory” co-star. Two new animated comedies, “The Great North” and “Housebroken,” also will arrive then.

The drama series “9-1-1” and its spinoff “9-1-1: Lone Star" will be midseason shows, Fox said, with more programming announcements ahead — which means the fate of other shows has yet to be settled.

Mid-May is customarily when networks detail their new series and schedules and hold presentations for ad buyers in New York City. This time around, there are alternatives to the crowded events and meet-and-greets with stars that the virus has ruled out.

Last week, CBS said it was renewing about 80 percent of its series and adding three newcomers, including a revamped “Equalizer” starring Queen Latifah. The network’s schedule, which would have been presented at Carnegie Hall, instead will be shared in a belated May 19 “virtual” version.

Fox, which typically shows off its plans at the packed, nearly 2,900-seat Beacon Theatre in Manhattan, said it was holding remote meetings with advertising and marketing companies.

“The effects of this global health crisis leave no business unaffected,” Fox Entertainment CEO Charlie Collier said in a statement that credited the company with “swiftly creating” a new fall lineup to bring to the marketplace.