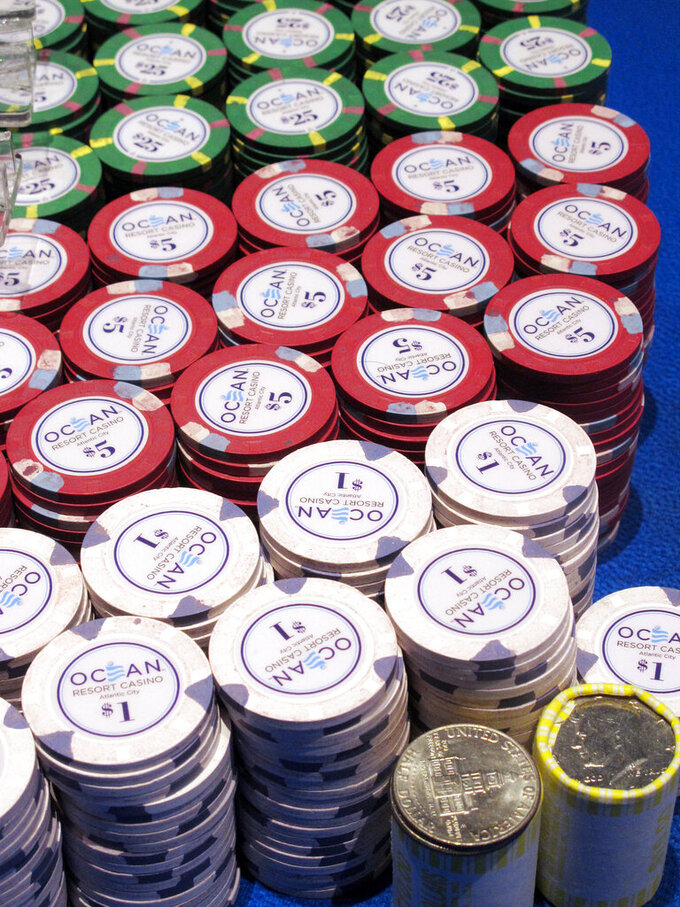 In this June 18, 2019 photo, gambling chips sit on a a gaming table at the Ocean Casino Resort in Atlantic City, N.J. How to keep chips clean is one of many issues with which U.S. casinos are grappling as they prepare to reopen after shutdowns due to the coronavirus outbreak. (AP Photo/Wayne Parry)

ATLANTIC CITY, N.J. (AP) — The coronavirus could be a literal game changer once America's casinos reopen.

Many decisions remain to be made. But prepare to have your temperature scanned at the door. Maybe a half or third of slot machines will work. Every other table could be closed, and there could even be plexiglass barriers between dealers and customers or separating slot machines.

Dealers and servers and customers — including those who smoke — all could be required to wear masks in many places.

Workers may be standing by to wipe down slot machines, kiosks and even elevator buttons as soon as someone is done touching them. One Las Vegas casino plans to hand out plastic sticks for pressing the buttons.

Such safety measures being considered in casinos across the country, even though a wide-scale reopening of the industry could still be weeks away, if not longer.

“It's important to focus on safety; it truly is," Jim Allen, president of the worldwide Hard Rock casino and hotel chain, said. “But I sincerely feel there are those who do not have a clue as to the economic challenge this is creating. The ripple effect of the trillions of dollars in debt we've just put on the United States by printing money is something that we all need to be very focused on."

Hard Rock may require 10 to 15 feet between guests. “Every employee and guest should be wearing a mask,” Allen said.

While masks have been widely adopted during the pandemic, the practice poses unique issues in a casino.

For instance, how will casino surveillance staff identify people barred from a casino through a government exclusion list, or those who have placed themselves on a self-exclusion list because of a gambling problem?

If slot machines are arranged to keep gamblers apart, what about a couple that arrives together and wants to sit next to each other while they play?

And how can chips, which are handled and swapped back and forth with each game, be sanitized quickly enough? Even money itself is often filthy.

Several casino executives in Atlantic City and Las Vegas acknowledged those are among the issues they are grappling with, and they note that state officials could still change the specifics of their plans before any reopening.

New Jersey's Division of Gaming Enforcement, which must give the all-clear before Atlantic City's nine casinos can reopen, would say only that it “has engaged with the casino industry to develop plans for the safe reopening of Atlantic City’s retail casino operations when authorized by the governor.”

In outlining a plan Monday to reopen the state, Gov. Phil Murphy, a Democrat, gave no indication when casinos might reopen.

Wynn Resorts, which has casinos in Las Vegas and Massachusetts, proposed a May 15 phased reopening, then moved it back to Memorial Day weekend.

Employees would scan each guest upon arrival; anyone with a temperature over 100.4 degrees would be turned back and referred to medical care.

At check-in, each guest would get an amenity bag including a pointer for touching elevator buttons, a bottle of hand sanitizer and a COVID-19 information card. A spray bottle of disinfectant and towels intended for cleaning will be in each guest room.

Every other slot machine would be turned off to create space between gamblers, and table games would have a maximum of three chairs.

Las Vegas Sands Corp. has installed plexiglass barriers at its front desk and is hiring companies to deep-clean. Sands, which donated 2 million protective masks to first responders, has begun building a supply for its own employees and guests, spokesman Ron Reese said.

Matt Maddox, Wynn's CEO, wrote a guest column for the Nevada Independent in which he said the company is losing $3 million a day while shut down.

“Our economy is in a free-fall,” he wrote. "Nevada will likely be one of the hardest-hit states in the nation and suffer very high unemployment. The only way to cross this river is one stone at a time, and we need to put our feet in the water before it is too late.”