Mass anti-coup protests in Myanmar as UN warns of crackdown 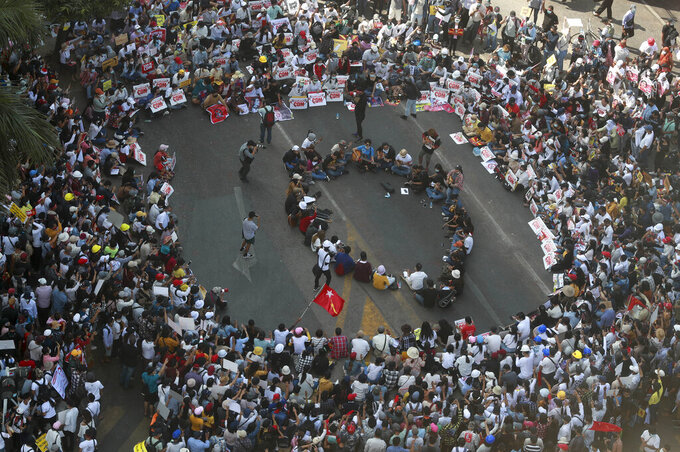 YANGON, Myanmar (AP) — Tens of thousands of demonstrators flooded the streets of Myanmar's biggest city Wednesday, in one of largest protests yet of a coup, despite warnings from a U.N. human rights expert that recent troop movements could indicate the military was planning a violent crackdown.

In Yangon, protesters marched carrying signs calling for ousted leader Aung San Suu Kyi to be released from detention, while others feigned car trouble, strategically abandoning their vehicles — and leaving the hoods up — to prevent security forces from easily accessing the demonstrations. Large rallies were also held in the country's second-biggest city, Mandalay, and the capital of Naypyitaw, in defiance of an order banning gatherings of five or more people.

One motorist, who spoke on condition of anonymity because he feared being targeted, explained tongue-in-cheek that his car had broken down “due to the suffering that our people are undergoing now. We just stopped the cars here on the road to show that we do not want the military regime.”

The demonstrations came a day after U.N. rapporteur Tom Andrews expressed alarm at reports of soldiers being transported into Yangon, noting that such movements had previously preceded killings, disappearances and mass arrests.

“I am terrified that given the confluence of these two developments­ — planned mass protests and troops converging — we could be on the precipice of the military committing even greater crimes against the people of Myanmar,” he said in a statement issued by the U.N. Human Rights office in Geneva.

By Wednesday evening, there had been no reports of major violence at the protests.

However, residents of Mandalay reported hearing gunshots about an hour after the start of the nightly curfew at 8 p.m. as dozens of police and soldiers roamed a neighborhood with housing for state railway workers.

There have been similar reports of gunshots and other aggressive actions in several cities since last week — apparently part of attempts to intimate people rather than cause injury. Railway workers could be targets because they have declared their support for the protest movement and carried out work stoppages.

The military seized power on Feb. 1, the day newly elected parliamentarians were supposed to take their seats — a shocking backslide for a country that had been taking tentative steps toward democracy. The junta said the takeover was necessary because Suu Kyi’s government had failed to investigate fraud claims in elections her party won in a landslide; the election commission has dismissed those claims.

The high protest turnout came a day after junta leaders had declared that the demonstrations were dying down — and Kyi Pyar, a former lawmaker from Suu Kyi’s party, said that dismissal only served to spur on the resistance.

“This upset the people,” she said. “We are not weak, we will never step back in the fight against the military regime. So we are back on the street again.”

In Naypyitaw, thousands of people, including private bank employees and engineers, marched down the city's wide boulevards, chanting for the release of Suu Kyi and President Win Myint.

Protesters also poured into the streets of Mandalay, where earlier in the week security forces pointed guns at demonstrators and attacked them with slingshots and sticks. Local media reported that several people were injured.

The marches have been organized as part of a civil disobedience movement, spearheaded by medical workers and supported by many civil servants.

Police filed a new charge against Suu Kyi, her lawyer said Tuesday, a move likely to keep her under house arrest and further fuel public anger. It was the second charge against Suu Kyi — the first for illegally possessing walkie-talkies, the second for an alleged violation of coronavirus restrictions — both apparent attempts to provide a legal veneer for her detention.

State television also announced charges Wednesday against several prominent entertainers, including actors and directors, who have all been publicly supportive of the protests against the coup. They were charged under a law that penalizes those who act in a manner intended to hinder or prevent members of the military and government employees from carrying out their duties.

The entertainers were apparently accused of inducing civil servants to walk off the job — and the move reflects the junta’s concern about the widespread and increasing involvement of civil servants in the protests.

On Tuesday night, the military for a third day in a row ordered an internet blackout — almost entirely blocking online access from 1 a.m. to 9 a.m.

While the military did not say why the internet was being blocked, there is widespread speculation that the government is installing a firewall system to allow it to monitor or block online activity.