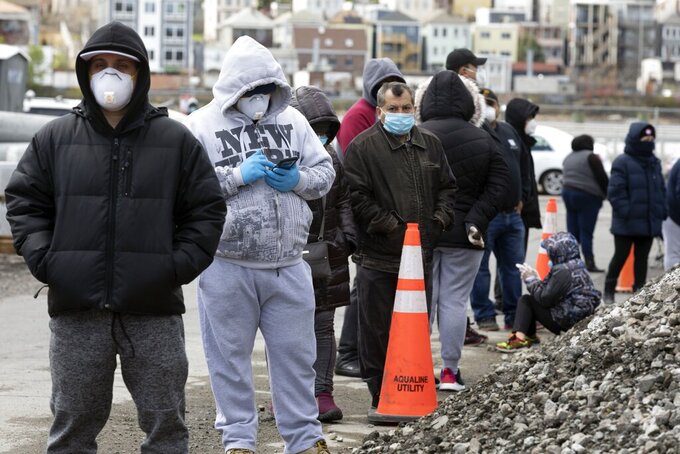 People dressed for the unseasonably cold weather wait in line at a food distribution site, Saturday, May 9, 2020, in Chelsea, Mass. (AP Photo/Michael Dwyer)

An update of COVID-19 news from across New England:

Massachusetts Attorney General Maura Healey is warning landlords not to try to kick tenants out of their homes during the outbreak.

The Democrat’s office says that despite a new state law temporarily restricting evictions, there’s been an uptick in reports of landlords trying to intimidate tenants into leaving.

The new law prohibits evictions during the ongoing public emergency unless a tenant has broken the terms of their lease or committed a crime that put other residents at risk.

According to Healey's office there has been an increase in reports of landlords trying to circumvent the rules by intimidating or harassing tenants into leaving voluntarily.

“Families across our state have suffered enormous financial hardship during this public health crisis, and they need to know that they won’t be kicked out of their homes,” Healey said.

Virtual graduation events have become common this year as colleges and universities look for socially distant ways to celebrate the accomplishments of graduates.

Massachusetts recorded another 138 confirmed COVID-19-related deaths on Saturday, bringing to 4,840 the total number of deaths recorded in the state since the pandemic’s start. An additional 1,410 positive cases were announced on Saturday for a new total of nearly 77,000.

Businesses that choose to reopen starting Saturday must limit the number of customers allowed inside based on their square footage. In addition, face masks are now required for anyone in a public place.

Gatherings of more than five people remain prohibited. Bar, salons and gyms remain closed and restaurants remain limited to take out and delivery.

The businesses allowed to reopen starting Saturday had been deemed non-essential under emergency rules that expired on Friday.

The state's Department of Health has the power to fine or close businesses that violate the new rules, which Raimondo said are designed to balance safety with the desire to reopen.

Several state parks also reopened, though officials said they would reduce the number of visitor parking spaces to limit attendance.

“Baby steps," Raimondo said Saturday when describing the state's phased-in reopening. "The way to do this is slowly, cautiously, and by following the rules.”

On Saturday the state reported 19 additional COVID-19 deaths and 210 new cases, bringing the state's totals to 418 fatalities and nearly 11,000 cases.

The number of people hospitalized with the disease was 292, down from 312 the previous day.

Maine will get more than $4.7 million in federal funds to expand COVID-19 testing.

The money, announced by U.S. senators Susan Collins and Angus King, will cover the purchase and use of test kits by 18 health care organizations around the state. Some of the money will be earmarked for walk-up and drive-up testing facilities, as well as for protective gear for health care workers administering the tests.

Bangor-based Penobscot Community Health Center is the largest recipient of the funds for testing and will receive more than $1 million.

Maine reported 34 new cases and one additional death on Saturday, bringing the state's total to more than 1,300 cases and 64 deaths.

Gov. Phil Scott sounded an optimistic note in a Tweet offering his sympathies to residents who might have been looking forward to golf, tennis or other activities after weeks inside.

“This is just a snapshot in time,” the Republican governor tweeted. “Just like better weather is ahead, better days will come, as well. We will get through this, together.”

On Saturday, the Vermont Department of Health reported two new positive cases of the coronavirus, for a total of 921. The total number of deaths stood unchanged at 53.

Help is on the way for households struggling to pay energy bills amid the outbreak, New Hampshire's Congressional delegation announced Saturday.

The state will receive $6.7 million in federal funds to boost the Low Income Home Energy Assistance Program, which helps eligible residents pay their energy bills. The additional money was approved as part of the federal coronavirus relief package

“COVID-19 poses a long-term threat to the financial security of low-income families and seniors, and we need to make sure they have access to the support they need during this crisis,” U.S. Sen. Jeanne Shaheen, D-New Hampshire, said in a statement announcing the funding.

As of Saturday, more than 3,000 people in New Hampshire had tested positive for the virus, an increase of 71 from the previous day. There have been at least 131 coronavirus-related deaths in the state, with 10 deaths reported Saturday.

A regional food bank that began distributing food from a Connecticut football stadium has extended the program through at least the end of the month after the outbreak increased demand.

Foodshare, a regional food bank that serves Hartford and Tolland counties, moved their operation to the University of Connecticut football stadium last month after outgrowing their space at Hartford Regional Market.

The food bank has been giving away an average of 25,000 pounds of food a day. Typically around 1,400 cars come through daily, although some days have seen as many as 1,800. The food bank is spending about $100,000 a week and for now. Jason Jakubowski, president and chief executive officer of Foodshare, said donations of money have allowed them to keep up.

As of Saturday, more than 32,980 state residents had tested positive for the virus and 2,932 residents had died. There were 1,301 people hospitalized because of the virus, 35 fewer than the previous day, continuing a two-week decline.