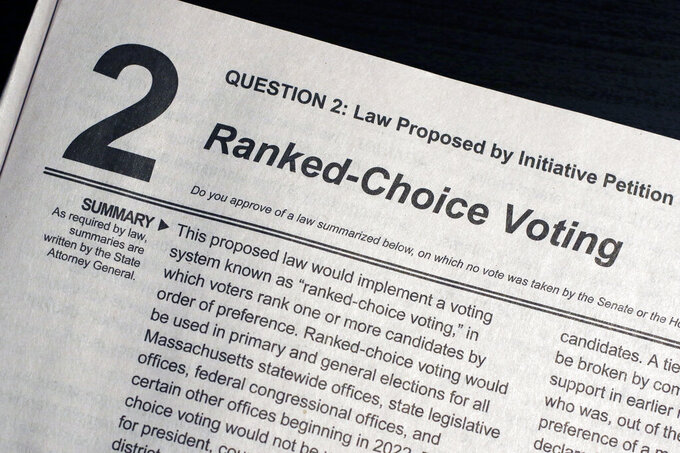 FILE - In this Sept. 23, 2020, file photo, a summary of Ballot Question 2 on the Nov. 3 Massachusetts election ballot known as a "Ranked Choice Voting" law is displayed in Marlborough, Mass., in a handbook provided to voters by the Secretary of the Commonwealth. (AP Photo/Bill Sikes, File)

BOSTON (AP) — It's not just about the White House.

A statewide referendum that would transform the way ballots are cast and tallied in Massachusetts, and a bid by incumbent Democratic U.S. Sen. Edward Markey for another six-year term, will be dominating Tuesday’s election in the Bay State.

A glance at the races and issues Massachusetts voters are deciding:

In 1972, Massachusetts famously was the only state to back Democratic presidential candidate George McGovern over Republican incumbent Richard Nixon. Since then, the only Republican presidential candidate to carry the state has been Ronald Reagan in 1980 and 1984. Hillary Clinton handily defeated Donald Trump in 2016, capturing nearly 61 percent of the vote. Massachusetts has 11 electoral votes.

Markey is hoping to fend off a challenge from Republican Kevin O’Connor, a lawyer from Dover who's pitched himself as a candidate who can help clean house in Washington.

The 74-year-old Markey has served for decades in Congress, first in the House and later in the Senate. He faced one of the highest-profile challenges of his career earlier this year when Democratic U.S. Rep. Joe Kennedy III tried unsuccessfully to oust him during the Democratic primary.

The state’s other U.S. senator — Democrat Elizabeth Warren — isn’t up for reelection until 2024.

Democratic Rep. Jim McGovern, who represents the state’s 2nd Congressional District, is hoping to defeat GOP challenger Tracy Lovvorn. McGovern, first elected to the U.S. House in 1996, is chair of the House Rules Committee and senior member of the Subcommittee on Nutrition and Oversight. Lovvorn describes herself as “a mother, a healthcare provider, an operational manager and a small business owner.”

In the state’s only open U.S. House race, Democratic Newton City Councilor Jake Auchincloss, who served as a captain in the Marine Corps, is facing off against Republican Julie Hall, also a veteran, to become the newest member of the state’s congressional delegation. Auchincloss came out on top of a crowded Democratic primary field to seize the party’s nomination. The seat is currently held by Kennedy, who opted not to seek reelection after deciding to challenge Markey.

Democratic Rep. Katherine Clark, who represents the state’s 5th Congressional District, is being challenged by Republican Caroline Colarusso. Clark is a member of the Committee on Appropriations and three subcommittees. In 2018, she was elected to serve as vice chair of the Democratic Caucus, making her one of the higher-ranking Democrats in the House. Colarusso worked for 27 years in the United States Postal Service and is a member of the Stoneham Select Board.

Democratic Rep. Seth Moulton, who represents the 6th Congressional District, is hoping to defeat GOP challenger John Paul Moran. Moulton, who briefly ran for president last year, is a former Marine who served four tours of duty in Iraq. He is vice chair of the Budget Committee and also sits on the House Armed Services Committee. Moran describes himself as an Irish Catholic and a lifelong entrepreneur, MIT space telescope scientist, Boston University MBA and gay conservative.

Democratic Rep. William Keating, who represents the 9th Congressional District, is hoping to beat back a challenge from Republican Helen Brady, who worked for the Boston Symphony Orchestra as Boston Pops business director, and independent Michael Manley. Keating serves on both the Foreign Affairs and Armed Services committees.

Democrats are expected to maintain their lopsided lock on both the Massachusetts House and Senate, giving Republican lawmakers few levers of power on Beacon Hill outside of the governor's office, held by Republican Charlie Baker.

Question One on the ballot would expand the state’s “Right to Repair” law by giving car owners and independent auto shops greater access to data related to vehicle maintenance and repair.

Car repair shops and auto parts suppliers said the measure would guarantee car owners access to the repair information needed to bring their cars to auto shops as vehicles become more computerized. Automakers cast the question as a data grab by third parties who want to gather personal vehicle information.

Question Two would make major changes to the way ballots are cast and tallied in future elections in Massachusetts by introducing ranked choice voting — a system that would give voters the option of ranking candidates in order of their preference: one for their top choice, two for their second choice, and so on.

Early voting and voting by mail have proven popular in Massachusetts during the pandemic, particularly in white suburbs where voters have been quicker to adopt pandemic alternatives to in-person balloting. Democratic Secretary of State William Galvin said the election could top the record nearly 3.4 million votes cast in 2016.