Masters field at 84 players heading into the final 3 months 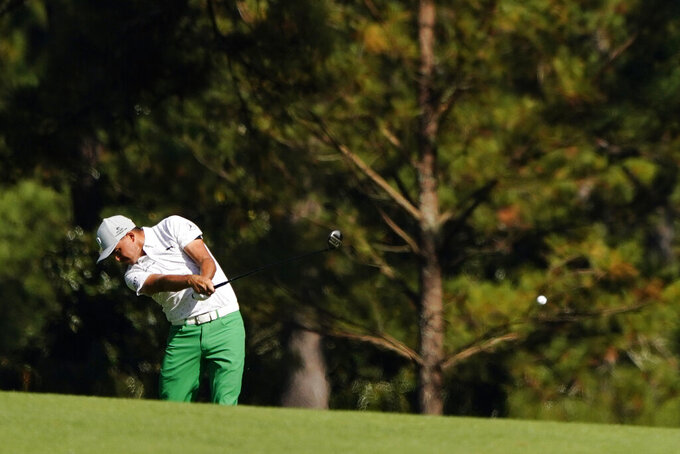 FILE - Rickie Fowler hits on the second fairway during the third round of the Masters golf tournament in Augusta, Ga., in this Saturday, Nov. 14, 2020, file photo. When the year ended, Fowler was among those who had not secured a spot in the 2021 Masters. (AP Photo/Matt Slocum, File)

C.T. Pan set a Masters record of sorts by having to wait 571 days from the time he qualified by winning the RBC Heritage until hitting his opening tee shot at Augusta National. In that respect, Daniel Berger doesn’t have it so bad.

He has to wait only about 10 months.

Berger became a talking point for a Masters in November when he reached as high as No. 13 in the world and still wasn’t eligible. That’s because Augusta National decided to set its field for an April tournament when the COVID-19 pandemic forced postponement until November.

Berger is among 84 players who already have qualified for the Masters going into 2021.

The Asia-Pacific Amateur in the fall in Australia and the Latin America Amateur scheduled for next month in Peru already have been canceled.

The only way into the Masters from now until April is to win one of the 13 PGA Tour events that offer full FedEx Cup points, or to move into the top 50 in the world ranking a week before the April 8-11 tournament. The 13 events includes the Sentry Tournament of Champions, where only three players — Andrew Landry, Nick Taylor and Richy Werenski — are not yet eligible for Augusta.

The biggest name missing from the field is Rickie Fowler, who was No. 23 when the year started and slipped to No. 53 at year’s end. Also missing out on a sure invitation were Erik van Rooyen (No. 51), Kevin Streelman (No. 52) and Robert MacIntyre, who moved up only slightly to No. 55 after closing with a 77 in the DP World Tour Championship in Dubai to drop to a tie for 23rd.

Of the players who had to rely on top 50 to earn a Masters spot at the end of the year, Matt Kuchar and Justin Rose were the only ones who played primarily on the PGA Tour. That generally is an indication of a mediocre year.

Rose had only three top 10s — one of them a runner-up finish in the Singapore Open — and dropped to No. 35 in the world after starting the year at No. 8. Kuchar won the Singapore Open, but he didn’t register another top 10 after he tied for second at Riviera. He did team with Harris English to win the QBE Shootout. That doesn’t count.

After waiting so long to finally play in the Masters, he matched the low score of the final round with a 68 and tied for seventh, earning a trip back. This time, he only has to wait 144 days for that opening tee shot.

Don’t get the idea that Justin Thomas has been home in Florida grinding on the range to get ready for the Sentry Tournament of Champions.

He’s not treating it like a working vacation, either.

Thomas made his debut in the winners-only field at Kapalua in 2016 and tied for 21st.

“I remember being really excited, but I didn’t take it as seriously as I should have,” Thomas said. “I was excited for a freebie, pocket money, points, not going there to win the tournament. I think my golf showed that.”

Since then, Thomas has won twice and finished third in his last four appearances at Kapalua.

When he played for the first time, Thomas was fresh off his inaugural PGA Tour win in Malaysia, and it was a big deal to walk out to the range and try to put the faces with the tournaments they won the year before.

It’s best he not try that this year. Because of the pandemic-shortened season, the field is for 2020 winners and anyone who qualified for the Tour Championship. There could be as many 15 players who didn’t win the previous year, and two players — Scottie Scheffler and Abraham Ancer — who have never won.

Annika Sorenstam practiced for two months getting ready to play with her father in the PNC Championship. And with 9-year-old son Will starting to get interested, Sorenstam figures it’s the most golf she has played in some time.

The 72-time LPGA winner might even put that practice to good use.

Sorenstam is playing in the LPGA Tour’s season opener next month, the Diamond Resorts Tournament of Champions, but she’ll be in the celebrity division with the likes of John Smoltz and using the Stableford scoring system.

She also is eyeing a return to real competition.

“I turned 50 so I’m looking at some of the old-lady events,” Sorenstam said.

She is not interesting in a full schedule on the Legends Tour or anything that resembles a comeback. However, Sorenstam is thinking seriously of playing the U.S. Women’s Senior Open at Brooklawn Country Club in Connecticut. She also mentioned the Senior LPGA, though that might interfere with her role as Junior Solheim Cup captain.

Sorenstam credits Will with creating that spark.

As for her game? Sorenstam said it’s nothing like it was, and that’s OK with her.

“I’ve lost distance, I’ve lost accuracy,” she said with a laugh. “I’m just calm, content. I’ve had enough distance from competing so I don’t compare. I know what it’s supposed to look like and feel like. But 12 years is a long time. I look at my kids, I’ve got a sixth-grader. I’ve got to be nice to myself and give myself a break. I appreciate the game more.”

Dustin Johnson finished the year at No. 1 with the largest margin over No. 2 in six years. That he accumulated the most world ranking points (463.54) was no surprise.

If only points accumulated for one year were measured, Johnson would have a big lead. Justin Thomas was second with 334.56 points, followed by Jon Rahm at 328.72. Rounding out the top five were U.S. Open champion Bryson DeChambeau (313.98) and PGA champion Collin Morikawa (272.75).

One player stood out from among the top 10 — Xander Schauffele, who was No. 6 in total points earned for the year without having an official PGA Tour win to his credit. For the world ranking, Schauffele received 58 first-place points for having the lowest 72-hole score at the Tour Championship. Johnson received credit for the victory with the staggered start based on the FedEx Cup (he tied for third in world ranking points).

Dustin Johnson earned an average of 25.75 world ranking points in his 18 starts worldwide in 2020. That's more than the total ranking points Tiger Woods earned (19.08) in the nine tournaments he played. ... Danielle Kang won the Vare Trophy for the lowest scoring average on the LPGA Tour. She was the seventh player to win the award in the last seven years, dating to Stacy Lewis winning back-to-back in 2013 and 2014. ... This was only the second time in 18 years that Ryan Palmer finished the year inside the top 50 in the world. The 44-year-old Palmer is at No. 30.

Fifteen of the top 20 players in the world at the end of the year were under the age of 30.

“If a frog had wings, he wouldn’t bump his (behind) every time he jumped. There’s a lot of ‘ifs’ and ‘buts.’ I’ve done a good job of taking the punches.” — Masters champion Dustin Johnson, when asked about some of his bad luck in majors over the years.