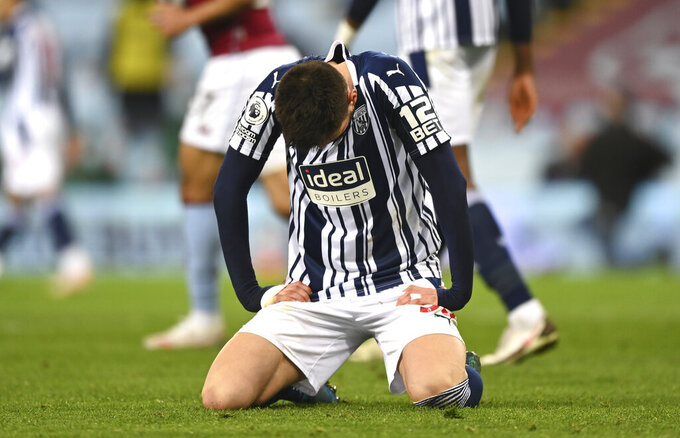 A look at what’s happening in European soccer on Monday:

West Bromwich is edging closer toward relegation from the Premier League as Sam Allardyce's side plays midtable Wolverhampton sitting 11 points from safety with five games remaining. Burnley, which is just above the relegation zone, hosts West Ham. The Hammers are still chasing Champions League qualification. A victory would leave David Moyes' east London side three points behind fourth-place Chelsea with four games remaining. Midfielder Declan Rice has missed West Ham's last four games with a knee injury, but he is pushing to be fit to face Burnley. Striker Michail Antonio is also trying to recover from his latest hamstring injury.

Sevilla looks to stay in contention in the Spanish league's title race when it hosts Athletic Bilbao. A fifth straight league victory would bring Sevilla within three points of leader Atlético Madrid with four rounds to go. Sevilla's lone league title came in the 1945-46 season. Real Madrid and Barcelona are also still in contention for the title in Spain. Athletic, sitting in 10th place, is trying to keep alive its hopes of grabbing one of the Europa League spots for next season.

Parma will be relegated if it loses at fellow struggler Torino. Defeat would leave Parma 12 points below Cagliari and the last position of safety with four matches remaining. Cagliari has the better head-to-head record which is the tiebreaker in Serie A. Victory would boost Torino’s chances of avoiding the drop as it would lift the team three points above the bottom three, with a game in hand. Torino has only lost one of its past five matches while Parma is on a four-match losing streak.

Hertha Berlin’s mission to secure Bundesliga survival begins after a two-week quarantine-enforced break with a relegation fight at Mainz. Hertha hasn’t played a game since April 10 due to a coronavirus outbreak at the club, and must catch up on its rivals to avoid joining last-place Schalke in the second division. Hertha is 17th in the 18-team division, three points behind Cologne in the relegation playoff place and four behind Arminia Bielefeld in safety. Hertha has three games in hand, but its players were not able to train together during quarantine due to the isolation measures. Pál Dárdai’s team now faces a punishing program of six games in 20 days. It starts with a tough task at Mainz, which is unbeaten in seven games and has won its last three.