Mavs' Porzingis to miss start of season after knee surgery 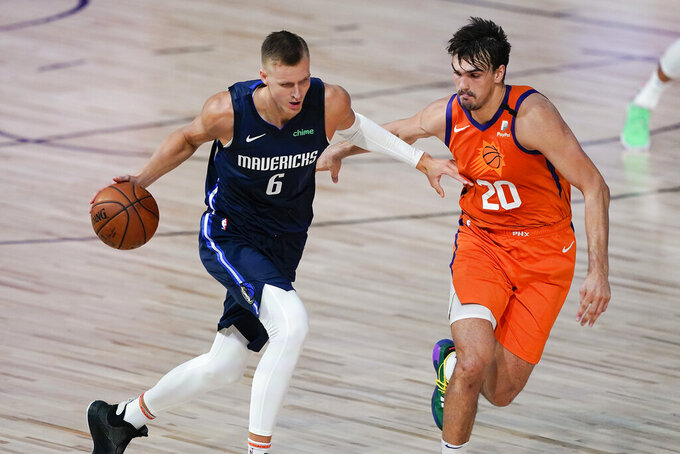 Dallas Mavericks forward Kristaps Porzingis (6) drives against Phoenix Suns forward Dario Saric (20) during the first half of an NBA basketball game Sunday, Aug. 2, 2020, in Lake Buena Vista, Fla. Porzingis will miss the start of the season as the Mavericks star continues recovery from surgery to repair a torn meniscus in his right knee. Director of basketball operations Donnie Nelson said in a radio interview Monday, Nov. 16, 2020, the club was being cautious with Luka Doncic's European sidekick, who missed more than a season because of another knee injury.(AP Photo/Ashley Landis, Pool) 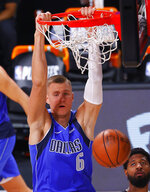 DALLAS (AP) — Kristaps Porzingis will miss the start of the season as the Dallas Mavericks star continues recovery from surgery to repair a torn meniscus in his right knee.

President of basketball operations Donnie Nelson told Dallas radion station 105.3 The Fan on Monday the club was being cautious with Luka Doncic's European sidekick, who missed more than a season because of another knee injury earlier in his career.

The NBA is in the midst of a short offseason after the pandemic-delayed 2019-20 season ended on the final day of September in the playoff bubble in Florida. Training camps are set to open Dec. 1, with the 72-game season scheduled to start Dec. 22.

Porzingis injured his right knee in the opener of a first-round series against the Los Angeles Clippers in the bubble in August. The 7-foot-3 Latvian had surgery in early October.

Dallas ended a three-year run of missing the playoffs behind the 21-year-old sensation Doncic and Porzingis, who played the next two games after the injury before missing the rest of a series won by the Clippers in six games.

Porzingis averaged 20.4 points and 9.5 rebounds in his first season with Dallas. He missed all of 2018-19 after tearing the anterior cruciate ligament in his left knee during what ended up being his final game with the New York Knicks in February 2018.

The Mavericks acquired Porzingis in a seven-player deal before the trading deadline in 2019 and immediately said he wouldn’t play the rest of that season. He signed a $158 million, five-year max contract with Dallas in July 2019.