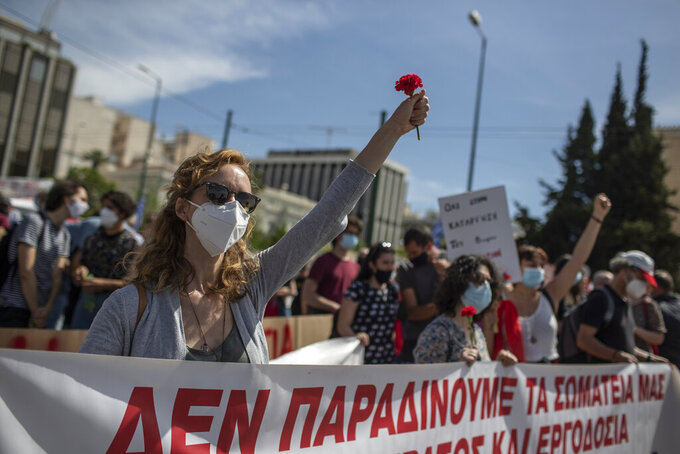 Members of the communist party-affiliated PAME wearing protective face masks hold red carnations, as they protest during a rally commemorating May Day, in Athens, Greece, Thursday, May 6, 2021. Demonstrators took part on a 24-hour strike against a new labour bill presented by the government protests. (AP Photo/Petros Giannakouris)

ATHENS, Greece (AP) — Thousands of striking workers and other protesters blocked traffic in Athens and cities across Greece Thursday to mark rescheduled May Day celebrations and rally against planned labor reforms accelerated by the pandemic.

The strikes and protests also disrupted flights and public transport, and halted many ferry services to the islands.

May Day events were rescheduled this year due to Orthodox Easter falling on May 2. Unions and left-wing opposition parties strongly oppose plans by the center-right government to shake up work regulations, allowing employers to vary daily working hours within a 40-hour week.

The government says the proposed reforms reflect the changing nature of work, also seen during lockdowns for the pandemic, while unions argue that the changes will further undermine working rights and overtime pay.

Health care workers’ unions are also pressing the government to hire more nurses and doctors on full-time contracts, as well as to provide a risk bonus for those working with COVID-19 patients.

The rallies were generally peaceful, but a small group of violent protesters clashed with police briefly in central Athens.