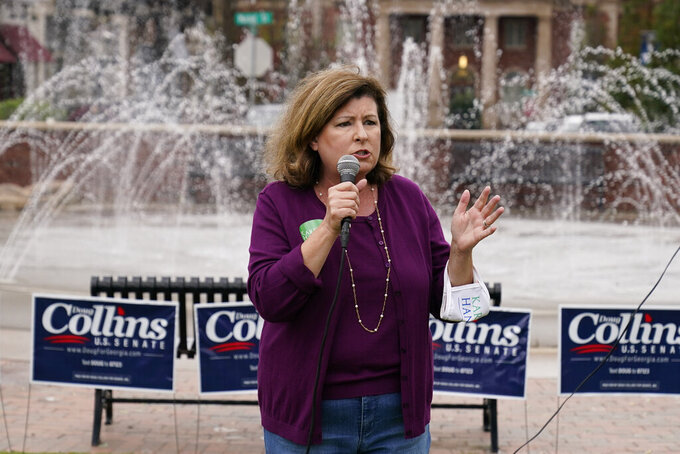 ATLANTA (AP) — Democrats will hold the seat they gained in Atlanta's northern suburbs two years ago, while results remain too soon to call in a second seat where they hope to make further inroads into what was once solidly Republican territory.

First-term incumbent Lucy McBath won reelection in the 6th District, beating Republican Karen Handel, the same candidate that she unseated in 2018. A former Georgia secretary of state, Handel sought a comeback in a swath of affluent Atlanta suburbs in Cobb, Fulton and DeKalb counties.

Results remain too soon to call in the 7th District, where Democrat Carolyn Bourdeaux was narrowly leading Republican Rich McCormick early Wednesday morning. Bourdeaux fell fewer than 500 votes short of winning a seat spanning parts of Gwinnett and Forsyth counties in 2018 against incumbent Republican Rob Woodall, who is stepping down.

Republican support in both districts cracked under the unpopularity of Donald Trump among college-educated white voters and the diversification of the suburbs.

The 6th District, with the state’s most affluent electorate, has a history as an incubator of high-profile Republicans, including former House Speaker Newt Gingrich, former U.S. Sen. Johnny Isakson and former Health and Human Services Secretary Tom Price.

But Jon Ossoff, who was running for Senate this year, nearly battered down the doors of the Republican fortress in 2017 in the nation’s most expensive U.S. House election. Ossoff fell short of Handel in the runoff, but McBath completed the takeover in 2018, edging out Handel.

Like in the 7th District, much of the debate revolved around health care, with McBath arguing that Handel wouldn’t make sure people with preexisting conditions could obtain insurance, while Handel argued she was in favor of such protections and saying McBath and other Democrats weren’t doing enough to guarantee protections but were choosing to campaign on the issue instead.

McBath also attacked Handel for her anti-abortion stance, including paid work she did for the Georgia Life Alliance, making a pitch that McBath would help guarantee abortion rights that could be threatened if the U.S. Supreme Court curtails current legal protections.

Handel targeted McBath as a “one-issue candidate” and said she was too closely aligned with House Speaker Nancy Pelosi and Democrats. She argued that McBath wasn’t doing enough to protect police in the wake of protests over police misconduct.

Bourdeaux, befitting her background a public policy professor and former budget director for the Georgia state Senate, took a plan-heavy approach to her race. She barely paused after her 2018 loss to Woodall, winning a majority against a crowded Democratic field that smelled opportunity in the northeastern suburbs.

McCormick, an emergency room physician making his first-ever electoral race, was backed heavily by the free-trade, anti-regulation Club for Growth. He also posted an outright victory against heavy primary opposition. McCormick sought to appeal to immigrants and native-born Americans on a platform that emphasized growth and economic opportunity, dismissing government as a “necessary evil” in one debate.

Bourdeaux and McCormick clashed most on health care and the COVID-19 pandemic. The Democrat pushed for more expansive government support for health care, while McCormick called for deregulation and further loosening of the rules under President Barack Obama’s health care overhaul.

Bourdeaux lambasted McCormick for what she called the Republican’s lackadaisical approach to pandemic precautions, while McCormick bristled at having his physician’s expertise called into question and said an approach that emphasized economic reopening was justified by declining coronavirus cases.