McConnell discusses prospects for another round of relief 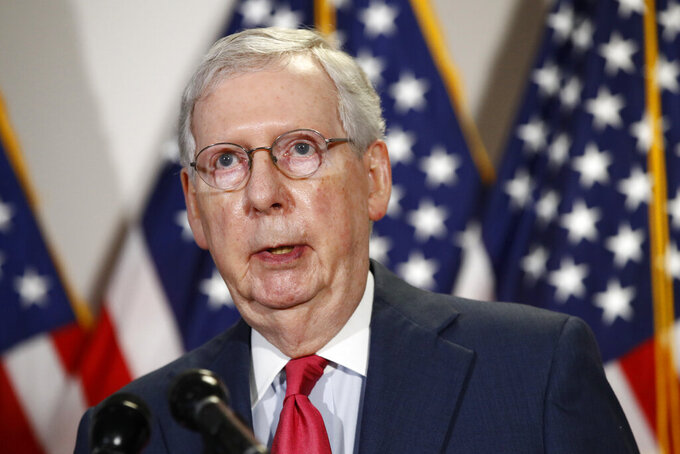 In this May 19, 2020, photo, Senate Majority Leader Mitch McConnell of Ky., speaks with reporters after meeting with Senate Republicans at their weekly luncheon on Capitol Hill in Washington. Congress is at a crossroads in the Covid-19 crisis. Lawmakers are wrestling over whether to “go big” as House Speaker Nancy Pelosi wants for the next relief bill or hit “pause” as McConnell insists. (AP Photo/Patrick Semansky)

Faced with a collapsed job market, Congress needs to tend to unemployment insurance funds supporting millions thrown out of work, but surging debt means there are limits to the scope of federal aid to help heal the coronavirus -damaged economy, the Senate's top leader said Tuesday.

In his first public appearances in his home state of Kentucky since March 13 due to the pandemic, Senate Majority Leader Mitch McConnell spoke at length about the prospects of another round of coronavirus relief passing the Republican-led Senate.

“Obviously, a lot of Americans have lost their jobs, so we need to make sure we have unemployment insurance properly funded for as long as we need," McConnell said during an appearance in Lexington. “And that could well lead to yet another bill."

McConnell said another round of federal assistance to state and local governments is possible, but he stopped short of committing to it. He expressed concern about the financial plight faced by cities, counties and states but added that the mushrooming national debt is also a concern.

“We don’t know yet," the senator said. “We’re still measuring the impact of what we’ve already done, and all of that money is not yet out.”

In Kentucky, economic damage caused by the pandemic will force cutting about $457 million, or 4%, from the General Fund in the current fiscal year, plus a potential special legislative session to downsize the Road Fund. The General Fund pays for most state services.

Gov. Andy Beshear has said Kentucky has enough in its unemployment insurance trust fund until summer to meet the unprecedented demand for benefits but will eventually need a cash infusion.

The health crisis, and the economic fallout, is unfolding as McConnell seeks a seventh Senate term in this year's elections in Kentucky.

While acknowledging the Senate will probably take up another relief bill, McConnell said it will be “much more narrowly focused” than the $3 trillion version passed by the Democratic-led House.

Raising alarm about surging deficits, he said: “We can’t keep propping up the economy forever."

“We now have a national debt the size of our economy for the first time since World War II, and that is a matter of some concern," the senator added.

McConnell continued to insist that the next package include federal liability protections for businesses that reopen.

“We cannot have an open economy with an epidemic of lawsuits on the heels of the pandemic that we’re working our way through," he said. “So I can guarantee you that if there’s another bill, and there probably will be, it will include litigation protection related only to the coronavirus pandemic.”

McConnell listed three factors he said were key to getting back to “full normalcy” from the health crisis — testing, treatment and a vaccine. McConnell held a mask while he spoke and donned it afterward.

The senator went to medical facilities in Louisville and Lexington to express gratitude to front-line healthcare workers. No one knows how long it will take for the country to recover financially from the pandemic, he said, adding: “The ultimate solution is to get to a vaccine as quickly as possible.”

McConnell noted that senators wore masks, socially distanced and followed other health guidelines while in session recently, adding “we did just fine.” But he added: “If you’re an older person and have pre-existing conditions, you probably ought to be extremely cautious and maybe still stay at home."