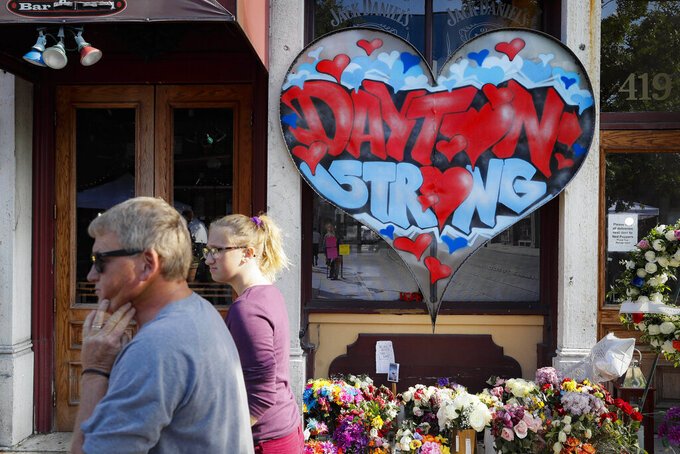 FILE - In this Aug. 7, 2019, file photo, pedestrians pass a makeshift memorial for the slain and injured victims of a mass shooting that occurred in the Oregon District in Dayton, Ohio. The Ohio Supreme Court is scheduled to hear oral arguments Wednesday, June 3, 2020, in a case filed by news media groups seeking school records of gunman Connor Betts, who gunned down nine people in Dayton before being killed by police. Media groups including The Associated Press argue the records could provide information on whether authorities properly handled warning signs. The Bellbrook-Sugarcreek Local Schools district says Betts' records are protected by student privacy laws. (AP Photo/John Minchillo, File)

The groups, including The Associated Press, argue the student records could provide information on whether authorities properly handled early warning signs from slain gunman Connor Betts.

Nothing in the federal student privacy law protects the rights of a former student who dies as an adult, and neither does an Ohio law meant to align state legislation with that federal act, Erin Rhinehart, who represents the media, told the court in oral arguments conducted via video conferencing because of the coronavirus pandemic.

The Bellbrook-Sugarcreek Local Schools district argues Betts’ records are protected by those state and federal privacy laws. But unless the district can show some kind of exception applies in this case, “they must supply the records,” Rhinehart said.

The U.S. Department of Education has interpreted the federal law to mean students' privacy rights end if they die, as do legal interpretations in other states, she added. Those include opinions backing the release of student records posthumously by attorneys general in several states including Kentucky, Oregon, Texas and Utah.

A decision by the high court is not expected for weeks

Betts was killed by police half a minute after he opened fire Aug. 4 in Dayton’s crowded Oregon District entertainment area. Armed with an AR-15 style gun with an extended ammunition magazine, Betts still killed nine people, including his sister, and wounded dozens more.

This case is exactly why Ohio's open records law exists, since it seeks critical government records, said Ben Flowers, an assistant Ohio attorney general arguing in favor of the records' release alongside the media groups.

The records are important because “they may hold clues the public can use to educate itself and its legislators about the red flags raised by mass shooters and potentially to hold accountable local officials who failed to heed those warning signs," Flowers said.

A lawyer representing the school district disagreed, saying that because the privacy laws don't specifically deal with releasing records on a student's death as an adult, the laws shouldn't be interpreted as allowing the release of the records.

“When a statute is silent on an issue, this court should not find it to be ambiguous,” attorney Tabitha Justice told the court.

She likened the confidentiality provided by the laws in question to a federal law protecting health records, as well as attorney-client privilege. She also said the issue was better suited for state lawmakers than the Supreme Court.

Justice Pat Fischer asked the lawyer representing the media groups about the provision in Ohio law prohibiting the release of records “without the written consent of each student who's 18 years of age or older."

That law should be followed in the same way the federal law already has, Rhinehart responded.

The federal law "has been consistently interpreted to find, with the exact same language, that upon death an adult student no longer has those rights and can no longer provide consent," Rhinehart said.

Police investigators said Betts had a “history of obsession with violent ideations with mass shootings and expressed a desire to commit a mass shooting.” The FBI said it uncovered evidence Betts “looked into violent ideologies.”

But authorities have also yet to identify a motive, or been able to say definitely whether Betts intended to kill his sister, Megan, or if her death was inadvertent.

The Ohio Supreme Court took the case after an appeals court ruled in favor of Bellbrook-Sugarcreek schools.

The appellate court ruled the media organizations hadn’t established a clear legal right to the records. The organizations also include the Cincinnati Enquirer, the Dayton Daily News, CNN, The New York Times, and WHIO-TV.