Medicaid incentive so far not enough to sway holdout states 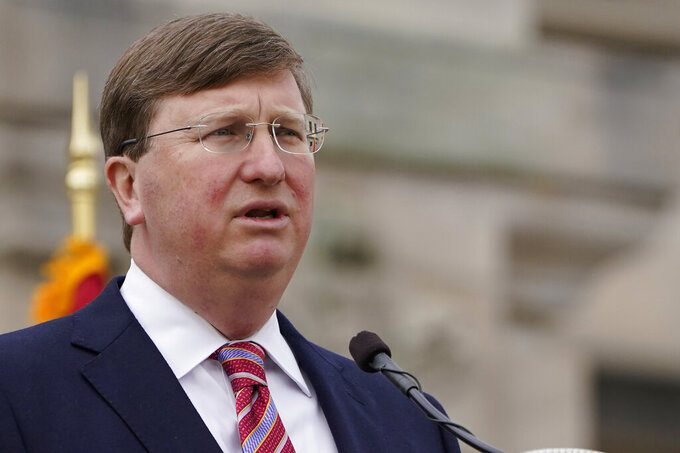 FILE - Mississippi Gov. Tate Reeves delivers his State of the State speech on Tuesday, Jan. 26, 2021, in Jackson, Miss. Congress just sweetened the incentives for states to extend Medicaid insurance coverage to more low-income adults, but the dozen Republican-controlled states that have spent years resisting expanding the programs have no plans to change course now. Gov. Reeves says he's not going for it, noting that his stance was a major issue in his 2019 campaign. His GOP primary opponents supported a plan to expand, with the state's share being paid for by hospitals and a fee of up to $20 a month for people who signed up. He opposed it, even as the Mississippi Hospital Association said it could bring up to 19,000 jobs to the state. (AP Photo/Rogelio V. Solis, file)

COLUMBIA, S.C. (AP) — Democrats' nearly $2 trillion coronavirus relief package includes a big financial incentive for the states that have opted against expanding Medicaid to provide health coverage for more low-income Americans. It's proving to be a tough sell.

The Associated Press surveyed top Republican elected officials in the dozen states that have resisted expanding coverage under a key provision of former President Barack Obama's heath care law. Some have softened their opposition, but the key gatekeepers— governors or legislative leaders — indicated they have no plans to change course.

“Gov. McMaster isn’t for sale, regardless of whatever ill-conceived ‘incentives’ congressional Democrats may come up with,” spokesman Brian Symmes said in a statement. “What the federal spending plan does is attempt to offer a short term solution for a long term problem.”

The federal government already pays 90% of the costs of expanding Medicaid coverage to more low-income adults. Thirty-six states have signed on to the expansion. Two more -- Missouri and Oklahoma -- are scheduled to begin their expansions in July.

Under the enticement included in the coronavirus relief bill adopted by Congress and signed by President Joe Biden, the federal government would boost its share of costs in the regular Medicaid program, which offers coverage for the poorest Americans. The bump in federal funding would last two years for the states that join the Medicaid expansion.

An analysis by the Kaiser Family Foundation found the additional federal money would cover 150% to 400% of the cost for the holdout states to expand Medicaid, which is jointly funded with federal and state dollars.

In Texas, the incentives would send the state about $5 billion over two years, and the state's share of expanding coverage would be about $3.1 billion. More than 1.4 million people in the state could become eligible for coverage. For Georgia, the estimate says it would add a net $710 million to state coffers and in Tennessee, $900 million.

“It’s the literal offer you can’t refuse, but let’s see if anyone refuses it, anyway,” said Katherine Hempstead, a senior policy adviser at the nonpartisan Robert Wood Johnson Foundation.

In Mississippi, one of the nation’s poorest states, advocates say up to 300,000 people — about one-tenth of the state’s population — could become eligible for health coverage if the state adopted the expansion.

Gov. Tate Reeves, a Republican, said he’s not going for it, noting that his stance was a major issue in his 2019 campaign. His GOP primary opponents supported a plan to expand, with the state’s share being paid for by hospitals and a fee of up to $20 a month for people who signed up. He opposed it, even as the Mississippi Hospital Association said it could bring up to 19,000 jobs to the state.

In three of the states — Kansas, North Carolina and Wisconsin — the Democratic governor favors expansion but can't convince a Republican-controlled legislature.

Kansas Gov. Laura Kelley this year called for legalizing medical use of marijuana and using the tax revenue to pay for expanding Medicaid. But the Republicans who control the Legislature blocked hearings on the proposal.

Those lawmakers say they worry the federal government would eventually cut its share of expansion funding.

Many Republicans remain concerned about the long-term costs of the program and are ideologically opposed to expanding government health care to working-age adults.

“I acknowledge that there are some gaps in coverage that need to be addressed, but I think they can be addressed in ways that do not require us to create a whole new level of entitlement in the state of North Carolina,” North Carolina Senate Leader Phil Berger, a Republican, told The Associated Press.

It’s a similar story in Wisconsin, where the GOP-dominated Legislature and Democratic Gov. Tony Evers are at odds over the expansion. The Democrats' coronavirus aid package doesn't change that, Assembly Speaker Robin Vos said earlier this month.

"It’s a nonstarter, and we will continue to oppose the liberal wish list item of Medicaid expansion,” he said.

Hempstead, of the Robert Wood Johnson Foundation, said Medicaid expansion is a way to address one of the biggest shortcomings in the national healthcare landscape: How to get coverage for a group of adults whose incomes put them below the poverty line -- $12,880 for a person living alone.

In states that haven’t expanded Medicaid, there are about 2.2 million such people, the Kaiser study found. They usually don’t qualify for traditional Medicaid programs. They also do not make enough to be eligible to buy subsidized private coverage on the health insurance marketplaces established under Obama’s overhaul.

Another 1.8 million people in those states who make slightly more -- up to about $17,774 for an individual — qualify for subsidized coverage but often can't afford it. They also could be covered through an expansion of Medicaid.

Studies have found that adding coverage for these lower-income people reduces charity care in hospitals, allows some people to be healthy enough to work and creates additional health care industry jobs. The financial benefits partially or totally offset the states’ share of the costs over time.

Even in the holdout states, those arguments catch the attention of some Republicans. In Texas, a Republican lawmaker has introduced a longshot bill calling for expansion, though the legislation has no other GOP co-sponsor and there is no indication that Republicans there have lessened their opposition. A similar measure has advanced through a legislative committee in Wyoming, though its prospects appear slim for passing the full Legislature.

In Alabama, Gov. Kay Ivey left open the possibility of expanding Medicaid at some point in the future, but there are no plans to do so.

"The problem has always been how to pay for it," Ivey spokeswoman Gina Maiola said. "She is open to the discussion, but right now, we simply do not have all the facts.”