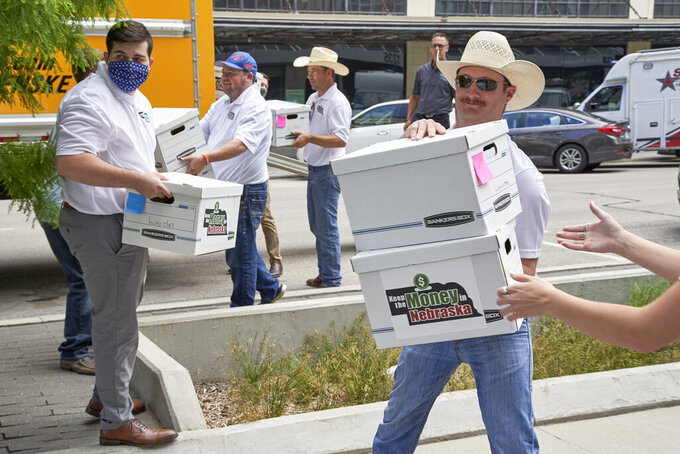 Activists for casino gambling form a chain to unload boxes of signed petitions in front of the offices of Nebraska's Sect. of State, in Lincoln, Neb., Thursday, July 2, 2020. Campaigns to legalize casino gambling and medical marijuana in Nebraska turned in petition signatures to try to place those issues on the November ballot. Casino gambling advocates have expressed confidence that they'll have enough signatures to qualify, and backers of the marijuana measure said earlier this week that they're "extremely close" to getting what they need. (AP Photo/Nati Harnik) 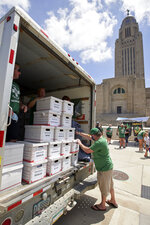 LINCOLN, Neb. (AP) — Nebraska voters will likely get to weigh in on measures to legalize medical marijuana and casino gambling after advocates for both causes announced Thursday that they have enough signatures to put them on the November ballot.

Organizers of the Nebraskans for Medical Marijuana campaign said they've gathered 182,000 signatures. To qualify for the ballot, the campaign needed to turn in more than 121,000 valid signatures, representing more than 10% of the voters in the state. Campaign officials also needed to collect signatures from at least 5% of voters in at least 38 Nebraska counties.

“Today represents a huge step forward for thousands of Nebraskans who deserve compassion,” said state Sen. Anna Wishart, of Lincoln, who co-chaired the campaign committee. “We are confident that we’ve met the requirements for ballot qualification, and after seeing the outpouring of support for our petition, we’re even more confident that Nebraska’s voters will approve this initiative in November.”

Meanwhile, the pro-gambling group Keep the Money in Nebraska announced that it will submit 475,000 signatures for its three petitions to allow casino gambling at horse-racing tracks.

One petition seeks to amend the state constitution to allow gambling, one would change state law to authorize and regulate the casinos, and the third would direct the tax revenue into a property tax credit fund and toward local governments. The constitutional amendment proposal garnered more than 205,000 signatures, while the two other gambling-related measures each received more than 135,000.

Supporters argue that Nebraska loses hundreds of millions of dollars a year to Iowa, which has numerous casinos set up along the Nebraska border.

“It's time to stop looking foolish and keep the money in Nebraska," said Bob Moser, president of the Nebraska Horsemen's Benevolent and Protective Association, a leading backer of the petition drive.

Supporters of medical marijuana launched the campaign after Nebraska lawmakers repeatedly rejected similar measures to legalize and regulate the drug for people with medical conditions. Campaign officials gathered far more signatures than they needed because some are likely to be declared invalid.

Barry Rubin, a consultant who led the signature-gathering effort for the marijuana measure, said the petition campaign was a “herculean effort” because the campaign was hindered by the coronavirus pandemic.

The pandemic led to the cancellation of large public gatherings and prompted several ballot campaigns to temporarily halt their efforts. One petition drive that sought to lower property taxes suspended its campaign in April, blaming the pandemic.

Some leading conservatives in the state, including Gov. Pete Ricketts and former University of Nebraska athletics director Tom Osborne, have voiced strong opposition to legalizing marijuana for medicinal use before federal regulators have approved it.

Ricketts also staunchly opposes the ballot measure to legalize gambling as well, and on Thursday he said he may use his own money to try to block the measures. Ricketts is a multimillionaire former business executive who has pumped hundreds of thousands of dollars into previous ballot measure campaigns, including a successful effort to reinstate the death penalty in 2016 after lawmakers overrode his veto and abolished it.

“We'll continue to talk to Nebraskans about the harm that will be caused by both of these ballot issues,” he said at his weekly news conference.

All of the petitions will go to the Nebraska secretary of state's office, which will validate signatures and confirm which petition drives have qualified for the ballot. That announcement is expected in mid-August.