Meeting between Husted, neighbors over tweet is in flux 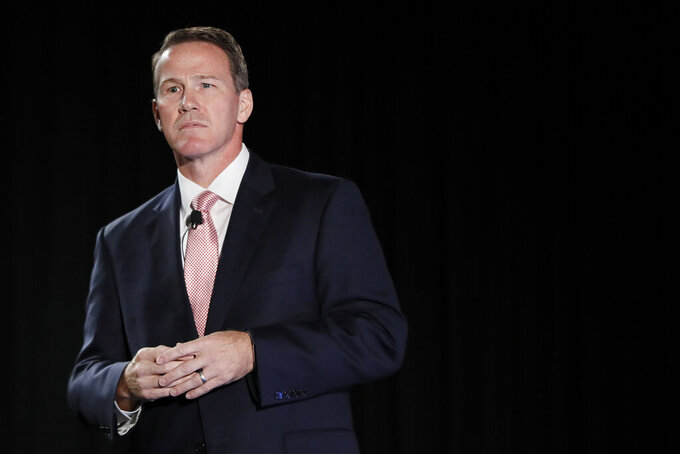 FILE - In this Oct. 16, 2018, file photo, Jon Husted, then a candidate for Ohio Lt. Governor, speaks at the Columbus Chamber of Commerce Government Day, in Cincinnati, Ohio. Now the current Ohio lieutenant governor, Husted entered the coronavirus pandemic as one of Ohio's rising Republican stars. Following an uninterrupted two-decade climb from state representative, to House speaker, to state senator, to secretary of state, to lieutenant governor, his next stop was supposed to be the Governor's Residence. But his party's hard turn to the right has required deft recalculation. (AP Photo/John Minchillo, File)

COLUMBUS, Ohio (AP) — A meeting between Ohio's lieutenant governor and Asian American neighbors in his Columbus suburb who are concerned about a tweet they viewed as inflammatory will not take place Friday.

Republican Lt. Gov. Jon Husted's office said that he and his family still plan to meet with the group and that they are working to set an agreeable date.

About 80 of Husted's Asian American neighbors in Upper Arlington signed a March 31 letter to Husted saying his use of the phrase “Wuhan Virus” on Twitter “raised the anxiety and fear” they're experiencing. A subgroup asked for a meeting, which they announced would be held Friday.

The neighbors' spokesman, Bishop Lord, said the fact that the meeting is not taking place is disappointing, but that he hopes a constructive dialogue can take place within the next few weeks.

Bishop said he is worried the situation might become “overtly political,” something concerned citizens do not want. He said many signatories to the letter are Husted's fellow Republicans.

In his March 26 tweet, Husted linked to an article in which a former Centers for Disease Control and Prevention director, without citing evidence, said the official believed COVID-19 originated in a lab in Wuhan. “So it appears it was the Wuhan Virus after all?” Husted tweeted.

Husted has insisted that the tweet was intended to call out the Chinese government, not to sow racial divisions.

The post has put him in a political crossfire amid rising violence Asian Americans have faced since the coronavirus entered the U.S., with racially motivated harassment and assaults occurring from coast to coast.