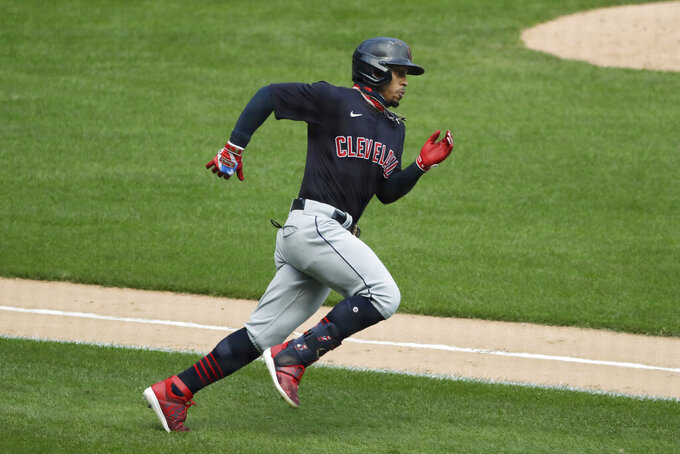 FILE - Cleveland Indians' Francisco Lindor runs after hitting a double against the Chicago White Sox during the fourth inning of a baseball game in Chicago, in this Saturday, Aug. 8, 2020, file photo. The Cleveland Indians have agreed to trade four-time All-Star shortstop Francisco Lindor and pitcher Carlos Carrasco to the New York Mets, a person with direct knowledge of the deal told the Associated Press on Thursday, Jan. 7, 2021.(AP Photo/Nam Y. Huh, File)

CLEVELAND (AP) — Francisco Lindor is moving to a new city and team that is willing to meet his salary demands.

The four-time Cleveland All-Star shortstop — one of baseball's best all-around players — was traded Thursday by the Indians along with pitcher Carlos Carrasco to the New York Mets, who have a new owner willing to spend at baseball's highest levels.

“They did not come cheaply,” Mets president Sandy Alderson said. “What we’re trying to do is create a new reality rather than deal with perception."

Dealing Lindor, who is eligible for free agency after the 2021 season, was inevitable for the mid-market Indians, who are unable to compete financially with MLB's big spenders and dropped roughly $30 million in dealing two prominent players and fan favorites.

“These are people we care about, not just players, and guys that loved the organization and have great memories here,” said Indians President of Baseball Operations Chris Antonetti, who said he was in tears when he spoke with Lindor and Carrasco. “Trades like this are really tough. But it's the right thing to do.”

For the Mets, landing Lindor is a home run and another major move by hedge fund owner Steven Cohen, who bought the team on Nov. 6 from the Wilpon and Katz families and has pledged to increase spending.

One of his next big-ticket items figures to be signing Lindor to a long-term contract, something the Indians couldn't do.

The 27-year-old Lindor can affect the game with his bat, glove and legs. A two-time Gold Glove winner, he is a career .285 hitter and averaged 29 homers, 86 RBIs and 21 steals in his six major league seasons — all with the Indians, who drafted him in 2011 and developed him.

He also has been the face of the Indians' franchise, with an infectious smile and joy for playing that has made him one of Cleveland's most popular athletes. But he's gone now, leaving the Indians without their best player and the team's fans grumbling about owner Paul Dolan.

Carrasco is one of the game's best comeback stories, overcoming leukemia to become one of the AL's steadiest starters. The 33-year-old has a 88-73 career record with a 3.73 ERA.

With an abundance of young pitchers, including Cy Young Award winner Shane Bieber, the Indians were in position to move a player of Carrasco's caliber.

He can be replaced. Finding someone to fill Lindor's shoes will be much tougher.

Once the Indians’ pandemic-shortened 2020 season ended with a loss to the New York Yankees in the wild-card round, it became a matter of when, and not if, Lindor would be traded. Talks intensified Monday.

Cleveland had run out of options. Lindor has turned down numerous long-term contract offers from the Indians, betting on himself and knowing he could get more money from a major-market team when he becomes a free agent.

He is signed for only another season, so the Mets will have to get to work quickly on locking him up for the long term.

“We've have one conversation with him and no conversations with his agent," Alderson said. “We acquired Francisco because of his present ability and the possibility that he could be a Met long-term. There’s no guarantee of that. It’s something that we will approach, you know, in the next few weeks.”

Cohen is hoping to turn around a franchise that has not won a World Series since 1986.

Carrasco is signed at $12 million in each of the next two seasons, part of a deal that includes a $14 million team option for 2023 with a $3 million buyout. The option would become guaranteed if he pitches in 170 innings in 2022 and is found to be healthy for the 2023 season.

“We're closer to one player away,” Alderson said.

The Mets gained more financial flexibility when second baseman Robinson Canó was suspended in November for the 2021 season after a positive test for a performance-enhancing drug, eliminating his $24 million salary.

New York's payroll is approaching the $210 million start of the luxury tax.

“It’s a significant demarcation. I wouldn’t say that it’s a line that cannot be passed,” Alderson said.

Alderson anticipates a coronavirus vaccine will enable a full season or close to a 162-game schedule.

Rosario is eligible for arbitration for the first time after earning $225,474 prorated from a $608,780 salary.