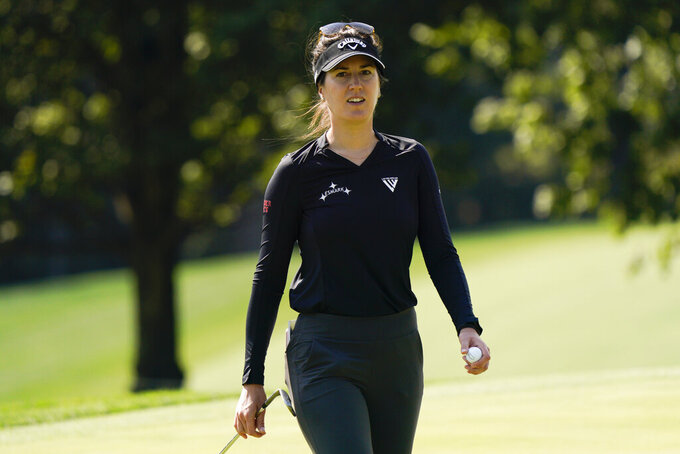 Sandra Gal, of Germany, walks to the green during a practice round at the KPMG Women's PGA Championship golf tournament at the Aronimink Golf Club, Wednesday, Oct. 7, 2020, in Newtown Square, Pa. (AP Photo/Chris Szagola) 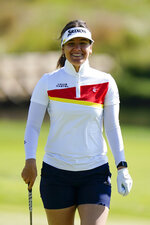 NEWTOWN SQUARE, Pa. (AP) — Mel Reid can be excused for feeling a bit sluggish when she woke up for a practice round at Aronimink. The fatigue carried over to the point where she wanted to blow off practice later in the day.

Winning a tournament — as Reid did Sunday at the ShopRite LPGA Classic for her first LPGA Tour title — can take a lot out of a player.

Reid soaked up the championship party, from leaving the course drenched in champagne to turning her Waterford crystal trophy into a keg and chugging beer out of it with caddie Ryan Desveaux.

Philly just might have to extend last call at McGillin’s.

“We obviously partied quite hard on Sunday,” Reid said on Wednesday. “Des, more than me. I was trying to be a little more sensible.”

For good reason. Reid, a 33-year-old from England, is among the contenders to win the Women’s PGA Championship at Aronimink.

But first, some rest.

“Today’s kind of the first day that I felt really tired,” Reid said.

She needs to be 100 percent to tackle 6,577-yard Aronimink, which originally was designed by Donald Ross and has hosted several prestigious championships. This is where Gary Player won his first PGA Championship in 1962, by one shot over Bob Goalby. Most recently it hosted the BMW Championship in the PGA Tour's FedEx Cup playoffs in 2018, when Keegan Bradley won.

Reid tied for third in this tournament last year at Hazeltine in Minnesota, and blew a final-round lead in Portland, Oregon, last month before her triumph last weekend in New Jersey. Reid is a six-time winner on the Ladies European Tour but she was more than overdue for an LPGA Tour title.

The relief was evident when she rapped in a 2-foot birdie putt on the final hole Sunday, dropped her putter and ran into the arms of Desveaux.

“My life has now changed and for the better, and yeah, I’m definitely going to want to get home to Florida and party up with some friends and really enjoy it,” Reid said.

She gets a crack at win No. 2 starting Thursday in a championship delayed three months because of the coronavirus pandemic. There were no fans allowed on a beautiful, breezy day of practice where temperatures neared 80 degrees. Without fans, there's no need for bleachers, tents and the merchandise stores usually packed with spectators and corporate sponsors mingling while they catch the best in women’s golf.

Reid, who became the fourth player in her 30s to win on the LPGA Tour this season, could use another big payday — she said the LPGA fined her an undisclosed sum because her celebration violated COVID-19 protocols.

“It wouldn’t have been me if I didn’t get in trouble,” Reid said. “I was just a bit naughty.”

The partying runs in the family. The first call Reid made was to her father in England, and she knew where to find him — a pub called the Black Swan.

Reid is trying to become the latest first-time major winner on the LPGA Tour. Going into this weekend, eight of the last nine major champions had never won one before, including this year's champions, Sophia Popov at the Women's British Open and Mirim Lee at the ANA Inspiration. The exception was Jin Young Ko, who won two majors last year. Ko is No. 1 in the world but has stayed home in South Korea during the pandemic.

Last year, Hannah Green used a steely performance down the stretch at Hazeltine to make the Women's PGA her first career victory. She became the third wire-to-wire winner in the history of the tournament.

“I didn’t really think I was capable to go wire-to-wire in an event, let alone a major championship,” Green said. “Even though I was kind of crashing a little bit on the back nine, at the start of the back nine in the last round, I was trying to give myself as much positive thoughts as possible and worked really well with my caddie to make sure that I knew that I was still in it.”

Green failed in September to defend her only other LPGA victory at Portland, finishing three shots back. She hopes to use the lessons learned there to be able to secure a second straight major championship.

“It at least gave me a bit of a taste of what this week would be,” Green said. “Obviously, being a major and being by run by the PGA, I expected it to be bigger. So far I’ve felt that way.”

That could be bad news for the rest of the field.