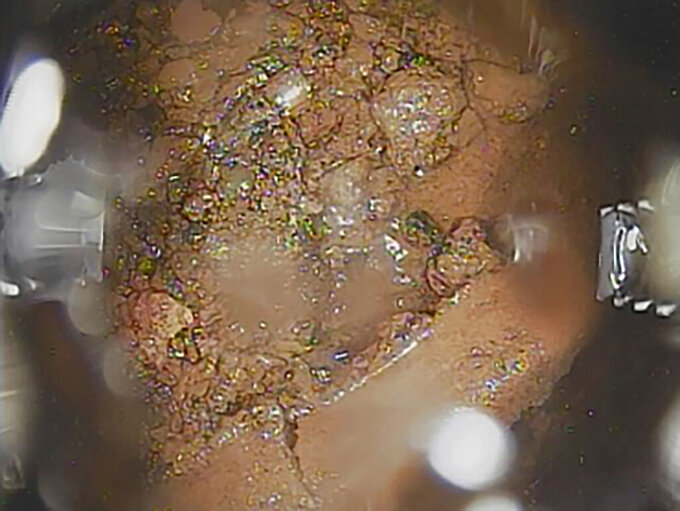 FILE - In this Dec. 2, 2019, file photo released by Tokyo Electric Power Co. (TEPCO), shows melted fuel taken by a telescopic robot inside of the primary containment vessel of Unit 2 reactor at the Fukushima Dai-ichi plant in Okuma, northeast Japan. Japan’s government and the operator of a wrecked Fukushima nuclear plant said Thursday, Dec. 24, 2020 a removal of melted fuel will be postponed by about one year until late 2022 due to delayed development of a robotic arm in Britain amid the coronavirus pandemic. (Tokyo Electric Power Co. via AP, File)

TOKYO (AP) — Japan's government and the operator of the wrecked Fukushima nuclear plant said Thursday that the removal of melted reactor fuel planned to start in 2021 will have to be postponed by about one year due to the worsening coronavirus pandemic.

The economy and industry ministry and Tokyo Electric Power Co. had planned to start removing a first batch of melted debris from the Unit 2 reactor at Fukushima Dai-ichi sometime next year, marking the 10th anniversary of the disaster triggered by the massive earthquake and tsunami on March, 11, 2011.

The start of the melted debris removal will now be delayed until late 2022, officials said.

The worsening virus situation in Britain has caused delays with a robotic arm being jointly developed in that country by Veolia Nuclear Solutions and Mitsubishi Heavy Industries.

Necessary testing has been delayed. And the shipment of the robotic arm, initially planned for January, is now expected around April, said Shuji Okuda, a trade ministry official in charge of the nuclear facilities development.

The overall decommissioning of the nuclear plant is still expected to take 30 to 40 years.

Removal of the 800 tons of nuclear fuel in the three reactors that melted, fell from the cores and hardened at the bottom of their primary containment vessels is by far the toughest challenge of the decommissioning process.

TEPCO has made progress in gathering information about conditions in the reactors. A small telescopic robot that went inside Unit 2 showed that small pieces of debris can come off and be lifted out. An assessment at Unit 3 was hampered by high radiation and water levels in its primary containment vessel, and a robotic survey at Unit 1 was unsuccessful due to extremely high radiation levels.

The government and TEPCO are also struggling with the massive amount of treated but still contaminated water accumulating and stored in about 1,000 tanks as the plant is expected to run out of space in less than two years. A government panel recommendation of a release of the water to the sea has faced opposition from local residents, including fishermen, and neighboring countries.

Experts say a 30- to 40-year completion target for the decommissioning is too optimistic. Some have raised doubts if removing all of the melted fuel is doable and suggest an approach like Chernobyl — contain the reactors and wait until radioactivity naturally decreases.