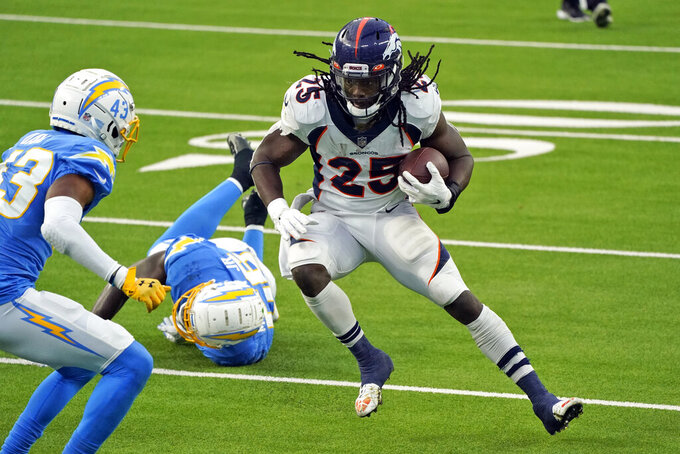 Denver Broncos running back Melvin Gordon (25) runs against the Los Angeles Chargers during the second half of an NFL football game Sunday, Dec. 27, 2020, in Inglewood, Calif. (AP Photo/Ashley Landis)

The sixth-year pro needs 107 yards rushing against the Las Vegas Raiders on Sunday to reach 1,000 for the second time in his career.

Gordon was forgetting his most productive season, 2017, when he rushed for 1,105 yards for the Los Angeles Chargers, the year after he missed the milestone by 3 yards.

Reaching 1,000 for the second time in his career apparently wouldn't assuage a 2020 season for Gordon that included four fumbles, a drunken driving arrest and Denver's fourth straight sub-.500 record.

Gordon signed a two-year, $16 million deal in free agency, but found it difficult to win over Broncos fans partial to local hero Phillip Lindsay, especially after running afoul of the law and his four fumbles.

His first came at the Broncos 23 in the opener that led to a Tennessee touchdown in a 16-14 loss to the Titans.

He had a pair of fumbles in a 43-16 loss to the Chiefs and also fumbled at the goal line in a 20-13 win over the Dolphins that teammate Justin Simmons preserved with an end zone interception in the final minute on Miami's subsequent drive.

Despite all that, Gordon was the primary option in Pat Shurmur’s ground game this season with Lindsay often injured and ineffective.

Gordon has nine touchdowns this season, including eight rushing.

Gordon was in line to serve a three-game suspension over the final three weeks of the season but his plea in his drunken driving case was delayed until next month.

Depending on how the case is adjudicated, Melvin might have to start the 2021 season on the suspended list.

“As far as the DUI, I just kind of don’t want to talk about it," Gordon said.

He also demurred when asked about a possible void or renegotiation of his contract, which right now calls for a $2 million roster bonus the first day of the new league year in March and a $4.5 million salary for 2021.

While he's letting his agent handle his contract and his lawyer deal with his legal issues, Gordon said he hopes to stay in Denver next season.

“Hopefully I did enough for them to want to keep me here," he said. "I do feel like they have something special here growing and I definitely want to be a part of it, especially after this year. It just wasn’t the year we wanted and I feel like we have a lot more proof to show.”

Coming to Denver during the coronavirus pandemic wasn't ideal, Gordon added, saying the COVID-19 protocols denied him the chance to really bond with his new teammates.

He said if the Broncos don’t bring him back, “that’d be a little heartbreaking just because I didn’t feel like I really got the full feel of being a Bronco. But like I said, I don’t want to speak too much on the contract. My job is to go out there and run that ball. That’s what they pay me to do."

So, he said his mind is only on hitting the hole on handoffs, picking up the blitz in pass protection and catching Drew Lock's passes when the ball is thrown his way.

“I plan on doing that every game I’m here," Gordon said. "So, we’ll see, hopefully it works out, and hopefully they like me enough to kind of put all that stuff to the side. I guess in a couple months or so we’ll see what’s up.”

NOTES: Strength and conditioning coach Loren Landow was back at practice leading the stretching period 13 days after going on the COVID-19 reserve list with a coronavirus infection. ... DL Shelby Harris (knee) was among those sitting out.