Mendenhall upset Virginia game vs Seminoles was called off 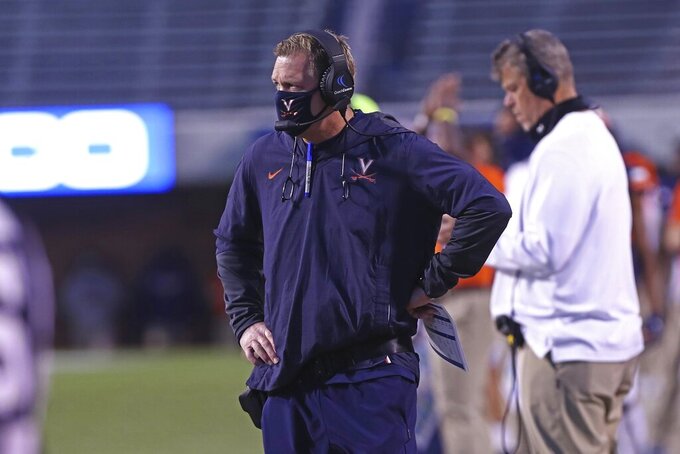 Virginia coach Bronco Mendenhall said he and athletic director Carla Williams have contacted the Atlantic Coast Conference calling for updated protocols and procedures after the Cavaliers flew to Florida on Friday only to learn their game against Florida State would not be played because of COVID-19 issues involving the Seminoles.

Virginia is the second team in as many weeks that made the trek to Tallahassee and learn the Seminoles had an outbreak limit the number of players of their roster. Florida State’s scheduled game game Nov. 21 against No. 4 Clemson was called off hours before kickoff.

“There’s a lot of work that could still be done regarding protocols and regarding ensuring that when you make a trip that you actually have a chance to play the game,” Mendenhall said Monday, noting that he and Williams have both expressed concerns to the league.

"I think that (Florida State coach Mike) Norvell absolutely wanted to play the game. I think he was hoping we would play the game. Unfortunately, policies and other things prevented us from making an unnecessary trip," Mendenhall said.

Florida State athletic director David Coburn said Saturday that after one positive test on Friday night, contact tracing — along with injuries and previous players' decisions to opt-out — left the team with only 44 scholarship players and some position groups “almost entirely depleted.”

Mendenhall said the league's timeline is part of the problem. The ACC requires teams to test players on Monday, Wednesday and Friday, and Mendenhall said the Cavaliers waited until all their test results were in at about 6 p.m. Friday before loading the team onto the airplane to travel to Florida.

“And it doesn’t seem like too much to ask for anyone that’s playing in college football to have their test in and reported negative before the opponent gets on the airplane to leave,” he said, adding that he has no desire to reschedule the game with the Seminoles.

“I have no interest in going back to Florida State. That opportunity was there, it’s no longer there," Mendenhall said. “I’m anxious to play Boston College and then Virginia Tech."

While Mendenhall was clearly frustrated and annoyed by what transpired, his words were less sharp than those of Clemson coach Dabo Swinney, who a week earlier suggested that a Tigers' lineman's positive COVID test was a bogus reason for the Seminoles opting out.

“This game was not canceled because of COVID. COVID was just an excuse to cancel the game,” Swinney said, also suggesting that Florida State should have to forfeit the game.