Men's March Madness will be played entirely in Indiana 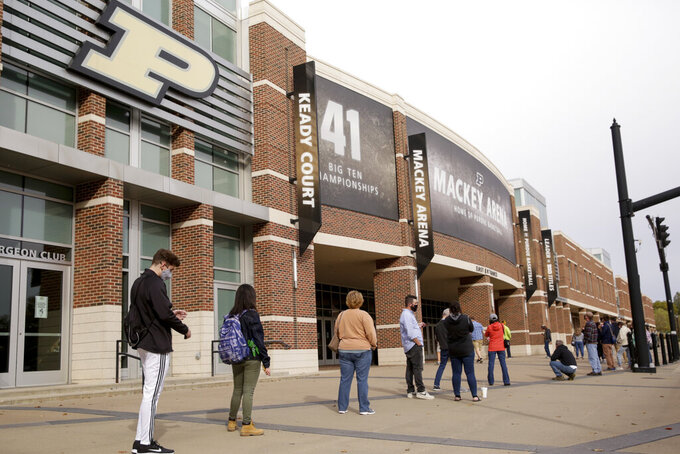 FILE - In this Oct. 14, 2020, file photo, voters line up outside Purdue University's Mackey Arena for early voting ahead of the 2020 general election, in West Lafayette, Ind. The NCAA announced Monday, Jan. 4, 2020, that this year's 67 men's basketball tournament games including the Final Four will be played entirely in Indiana. Games will be played on two courts inside Lucas Oil Stadium as well as at Bankers Life Fieldhouse, Hinkle Fieldhouse, Indiana Farmers Coliseum, Mackey Arena at Purdue and Assembly Hall in Bloomington. (Nikos Frazier/Journal & Courier via AP, File)/

INDIANAPOLIS (AP) — The NCAA is giving Indiana an exclusive ticket to showcase March Madness and the basketball-crazed state can't wait to take center stage this spring.

The NCAA announced Monday that its showcase event — the Division I men's basketball tournament, all 67 games of it — will be played entirely in or near Indianapolis. The hope is to limit the possibility that the coronavirus pandemic cancels the wildly popular and lucrative tournament for a second consecutive season.

“There are a number of world-class facilities in a close location and that was critical because you have to run a large number of games simultaneously that you can manage and control," NCAA President Mark Emmert said. “There were a number of cities that were very interested in hosting this event, but the immediate opportunity to do this in Indianapolis was pretty self-evident for several reasons. For one, we were already going to be there."

Indy was already scheduled to host the Final Four and it didn't take long for the city to emerge as the favorite.

The original plan was for the 67 games to be played at 13 sites across the country, starting with the First Four in Dayton, Ohio. Regional sites were set for Minneapolis, Denver, New York City and Memphis, Tennessee.

Instead, the buzzer beaters and jaw-dropping performances will all take place in a state known perhaps more than any other for its love of basketball.

“I really don’t care if they play the tournament on Saturn or in Indianapolis," Louisville coach Chris Mack said. “Hopefully, we’re a part of it and we do our part to get there. And wherever they put it, they put it.”

Logistically, Indy made sense, too.

Dozens of restaurants of hotels are within walking distance of Lucas Oil Stadium, home of the NFL's Indianapolis Colts, and Bankers Life Fieldhouse, home of the NBA's Indiana Pacers and WNBA's Indiana Fever. Many of those businesses and venues are connected by skywalks that allow players, coaches or fans to stay indoors.

Hinkle Fieldhouse, the historic home of the Butler Bulldogs, and the Indiana Farmers Coliseum, where the IUPUI Jaguars play, are just short drives from the downtown area. Mackey Arena at Purdue and Assembly Hall at Indiana also are about an hour's drive from downtown.

All of those venues are slated to host games.

Playing in a state where the sport is revered and basketball stars are considered royalty doesn't hurt, either. Oscar Robertson, Larry Bird, Rick Mount, Damon Bailey and the late John Wooden were all stars here at one level or another. Bob Knight, Gene Keady and the late Tony Hinkle, originator of the orange basketball, all coached in the state, which for decades had a single-class state tournament won famously in 1954 by Milan High, the inspiration for Hollywood's “Hoosiers.”

So perhaps bringing March Madness back home to Indiana, home of the NCAA's headquarters, was the natural choice..

“Last year, we had to rip March Madness away from all the teams and all the fans at the very last minute,” Emmert said. “We know it was the right thing to do, but it was a painful thing to do. So we want to deliver this year on the promise of March Madness. They deserve it.”

Some things aren't expected to change.

Selection Sunday is still set for March 14, the tourney field is expected to remain at 68 and the Final Four games are still scheduled for April 3 with the title game two days later. CBS Sports and Turner Sports will continue to televise and stream the games.

But this tourney will have dramatically a different atmosphere.

Two courts will be constructed inside cavernous Lucas Oil Stadium, though only one game will be played at a time because of potential distractions from whistles and horns going off. NCAA vice president of basketball Dan Gavitt said fewer games may be played each day because of longer breaks needed to properly clean the facilities. Preliminary round dates have not yet been set.

“If we’re going to be able to do it, it’s got to be done safely," Creighton coach Greg McDermott said. “The more you can limit travel the better. To do it in the middle of the country makes it easier for everybody. ... You want to be there, you want to be part of it. It’s going to be an historic event."

Fewer fans are expected, too.

NCAA officials said a limited number of family members of players and coaches can attend games, but they will consult local and state public health officials to determine final attendance.

COVID-19 testing will be conducted before each game and each team will be assigned its own floor and its own meeting spaces inside its hotel.

“We’ve very intentionally talked about this being a controlled environment," Gavitt said. "The NBA and WNBA had much more of a bubble. We’re not going to be able to create that specifically but we will come incredibly close to that."

Gavitt cautioned that the holding the tournament will present many challenges. Scores of college basketball games have been canceled or postponed this season because of COVID-19 issues, with games called off on a near-daily basis.

Emmert said an announcement about the Division I women's tournament is expected soon. San Antonio, which was sheduled to host this year's women's Final Four, is believed to be the front-runner for a potentially similar tourney.

AP Sports Writers Eric Olson in Omaha, Nebraska and Gary B. Graves in Louisville contributed to this report.