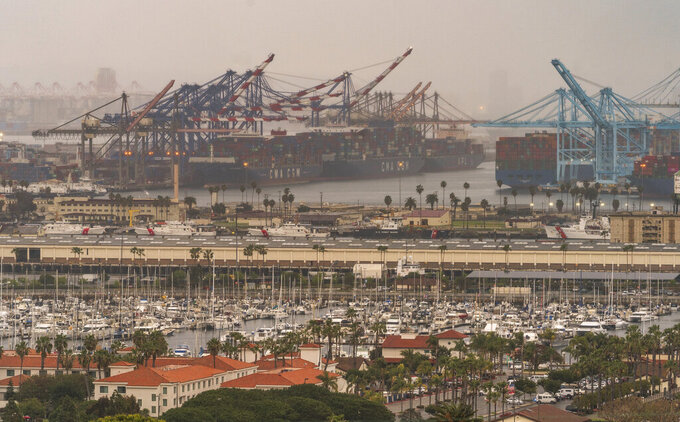 FILE - In this Wednesday, March 3, 2021 file photo, container cargo ships are seen docked in the Port of Los Angeles. More than 15 months into the coronavirus pandemic, tens of thousands of seafarers vital to the global shipping industry remain stranded at sea or in ports, unable to leave their ships or get to new assignments due to global travel restrictions. Friday, June 25, 2021 is International Seafarers Day, and ships around the world, from Los Angeles to Singapore to Rotterdam, planned to blare their horns in solidarity. (AP Photo/Damian Dovarganes, File)

Swansea, WALES (AP) — More than 15 months into the coronavirus pandemic, tens of thousands of seafarers vital to the global shipping industry remain stranded at sea or in ports, unable to leave their ships or get to new assignments due to global travel restrictions.

Friday is International Seafarers Day, and ships around the world, from Los Angeles to Singapore to Antwerp, Belgium, planned to blare their horns in solidarity.

“They’ve been the forgotten heroes of this pandemic and they’ve really been collateral damage, because it was so easy for countries to say we’ll take nobody into our country, except, of course, they wanted the ships to come in and just discharge their cargo," said Guy Platten, head of the International Chamber of Shipping.

It's been a problem since near the beginning of the pandemic, but Kasper Søgaard of the Global Maritime Forum said the situation has worsened recently, largely due to new travel restrictions countries have imposed in response the delta variant of the coronavirus, which was first identified in India.

The forum found that the percentage of stranded seafarers jumped from 5.8% to 7.4% from May to June, figures that are continuing to rise, Søgaard said.

More than 80% of world trade is transported by sea, meaning seafarers play a critical role in global commerce. The International Chamber of Shipping estimates that 200,000 are affected by travel restrictions, either stuck at sea or unable to leave home to get to their ships.

Some have been stranded for as long as 20 months, which contravenes the International Labor Organization's Maritime Labour Convention, which allows a maximum of 11 months.

Daresh Villarayan of Punnaikayal in Tamil Nadu, India, spent a month on the MT Peterpaul while it was stuck in Sri Lanka. He has also had to quarantine numerous times. He recorded video of himself and his crewmates talking about their predicament from the ship, which is now back on the move.

“Because of corona, there are lot of problems in the life of a seaman,” he said.

Hermant Solanki, another Indian crew member from Surat, Gujarat, could not find work for eight months. He tried to join a ship in Egypt, but instead had to spend a month in a hotel before finally making his way to the MT Peterpaul.

The chamber says seafarers from India are most affected because they have the most travel restrictions imposed on them.

About 900,000 crew members are from countries that aren't producing vaccines, meaning their movements may be further limited if they can't get vaccinated.

Beyond tooting horns, there has been a global push to better safeguard seafarers’ rights. In January, more than 700 organizations and companies, from the World Economic Forum to BP and Shell, signed the Neptune Declaration on Seafarer Wellbeing and Crew Change. One call to action was declaring seafarers as essential workers. Sixty countries so far have done so.

The chamber says 12 countries have prioritized the push to vaccinate merchant crews, while ports in the United States, Belgium and the Netherlands are vaccinating all crews who arrive, regardless of nationality.

Even as the pandemic has raged, some 400,000 seafarers have kept the industry going, Platten said.

“We owe the seafarers a huge debt of gratitude because not one time during the last 15 months have they stopped sailing on the ships, stopped delivering the vital ... the fuel, the food, the medical supplies and all the other essentials that keep the world going," he said.