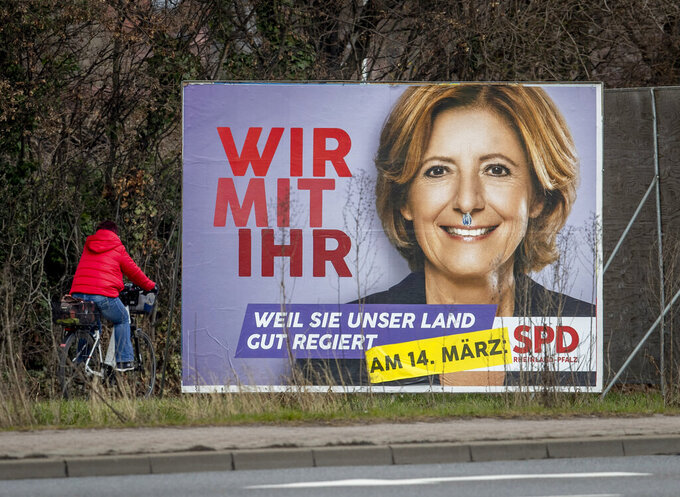 BERLIN (AP) — Two German states choose new legislatures on Sunday, the first major political test of a year in which a national election will determine who succeeds Chancellor Angela Merkel. The weekend votes come at a challenging time for the longtime leader's party.

They also are expected to highlight the increased popularity of the environmentalist Green party, which could hold the key to forming Germany's next government and is expected to make its own first bid for the chancellery.

Amid discontent over a sluggish start to Germany's vaccination drive, and as a long lockdown only gradually loosens, Merkel's center-right Union bloc faces blowback over allegations that two lawmakers profited from deals to procure masks early in the coronavirus pandemic.

That complicates an already demanding battle to dislodge two popular governors — among them Winfried Kretschmann, Germany's only Green governor. He has firmly cemented his appeal to centrist voters over a decade leading Baden-Wuerttemberg, an economic powerhouse that is home to automakers Daimler and Porsche.

The votes should help determine who gains political momentum for the months ahead. And they come as the center-right approaches a decision on a candidate to succeed Merkel when Germany elects a new parliament on Sept. 26.

“The ratings for the CDU were going down anyway and now the so-called ‘mask affair’ is coming on top of that," said Thorsten Faas, a political science professor at Berlin’s Free University. “The signs for the CDU and Armin Laschet aren't good — very weak results should be expected for the party.”

Baden-Wuerttemberg in southwestern Germany, where some 7.7 million people are eligible to vote, was dominated by the CDU for decades until Kretschmann won power a decade ago. That stunning result for the Greens came as the Fukushima reactor disaster in Japan accelerated the end of nuclear power in Germany.

Kretschmann, now 72, a popular, fatherly and even conservative figure with a strong regional accent, has dug in since then. In the last election five years ago, the Greens overtook the CDU to become the strongest party in the state.

Polls suggest they can hope to widen their lead on Sunday. That could provide a bounce at the national level for the traditionally left-leaning party, which has become increasingly open to alliances with conservatives.

This time, Green election posters in a campaign that has involved little traditional campaigning because of the pandemic feature a photo of Kretschmann with the slogan “You know me.” Merkel, who isn't seeking a fifth term after nearly 16 years in power, once used that phrase in a debate to underline her own largely ideology-free appeal.

Kretschmann has run Baden-Wuerttemberg with the CDU as his junior coalition partner since 2016 — and a coalition between the two parties is widely viewed as a strong possibility at the national level after the September election. His CDU challenger, Susanne Eisenmann, doesn't come close to matching Kretschmann's personal popularity.

Also voting Sunday is Baden-Wuerttemberg's neighbor, the state of Rhineland-Palatinate. Some 3.1 million people are eligible to vote there.

The center-left Social Democrats have led the once solidly conservative region for 30 years — currently under governor Malu Dreyer, whose personal popularity has kept her party's support above its dismal national ratings. She faces a close race against CDU challenger Christian Baldauf, a longtime regional lawmaker who is far less familiar to voters.

Many people had already voted by mail, so it's unclear to what extent the scandal over lawmakers in the CDU and its Bavaria-only sister party, the Christian Social Union, allegedly enriching themselves through mask deals will impact on Sunday's vote. Nikolas Loebel, a CDU lawmaker from Baden-Wuerttemberg, and the CSU's Georg Nuesslein both quit their parties on Monday and say they won't run for parliament again.

The Union bloc of CDU and CSU benefited from Merkel's perceived good management of the pandemic over the past year and still leads national polls by a distance, but this year has started badly. Germany's vaccination campaign has been significantly slower than those of Israel, Britain and even the United States.

Laschet says that he and Markus Soeder, the CSU leader and Bavarian governor who is the other serious contender to run for chancellor, will decide on the CDU candidate in April or May. Soeder, an advocate of tough action to beat back the virus, has gained in stature during the pandemic.

If Sunday's elections go badly for the CDU, that will be “tailwind” for Soeder, said Faas, the political science professor. “But overall, it turns out that the Union isn't really prepared for the post-Angela Merkel era.”

Whoever takes on the task will face the Greens' candidate, who has yet to be chosen, and current Finance Minister Olaf Scholz in September.

National polls show that the Greens' support has roughly doubled since the last German election, while that of Scholz's Social Democrats — traditionally Germany's biggest center-left party and now the junior partner in Merkel's national government — has dwindled.

Kerstin Sopke in Berlin contributed to this report.