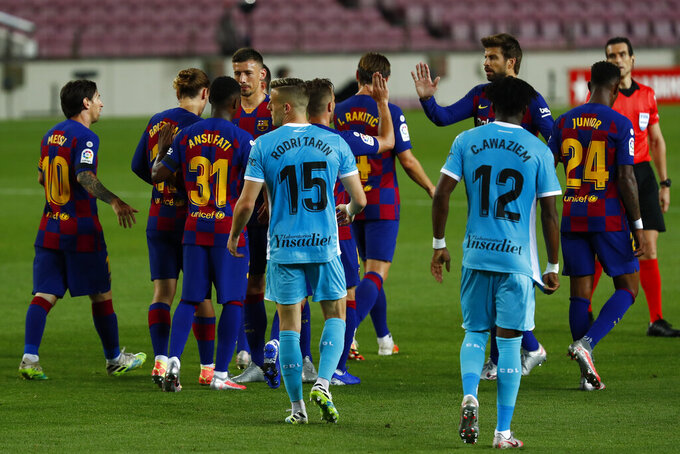 MADRID (AP) — In its first match without fans at the 99,000-capacity Camp Nou Stadium since the Spanish league was suspended because of the coronavirus, Barcelona defeated Leganés 2-0 Tuesday with a goal by Lionel Messi.

Ansu Fati also scored as Barcelona overcame a slow start against its last-place opponent to open a five-point gap to Real Madrid ahead of the rival's home game against Valencia on Thursday.

Fati opened the scoring just before halftime and Messi converted a 69th-minute penalty for his league-leading 21st goal. It was also his 699th career goal for club and country.

Messi also scored as Barcelona returned to action on Saturday with a 4-0 win at Mallorca in its first game in more than three months following the pandemic break.

“It's important to keep winning,” Barcelona midfielder Ivan Rakitic said. “It's obvious that we still need to gain more rhythm, but we are happy to have won six points already."

The last time Barcelona played a home match without fans was in October 2017 amid the Catalonia separatist movement. The team defeated Las Palmas 3-0 in a game played the same day of a controversial independence vote that the Spanish government deemed unconstitutional.

This time Barcelona was forced to keep fans away from the Camp Nou because of the pandemic, and the club placed banners and mosaics in the stands to honor those affected by virus. Videos sent by fans were shown at the stadium, and music by local violoncellists was played during the moment of silence observed before the match in memory of the victims of COVID-19.

Leganés had the two best chances in the first 15 minutes — one blocked by defender Clément Lenglet in front of the goal line and another denied by the post — but Barcelona eventually took control and opened the scoring through Fati's low shot from inside the area in the 42nd.

Messi's 629th goal for Barcelona came from the penalty spot after he was fouled following a run that started near the midfield line. He fired a left-foot shot into the corner to open a seven-goal gap to Madrid's Karim Benzema in the league's scoring chart.

“It was difficult to find spaces but we kept our patience," Rakitic said. “After Ansu Fati’s goal everything became easier.”

Luis Suárez, who returned to action last week after recovering from knee surgery, came off the bench in the 54th to replace Fati.

Antoine Griezmann had a goal disallowed in the 64th after video review determined that Nelson Semedo was offside before making a cross to the French forward.

In other results Tuesday, fifth-place Getafe drew 0-0 with Espanyol at home to remain winless after the break, while seventh-place Villarreal edged visiting Mallorca 1-0 for its second win in a row. Both Espanyol and Mallorca are in the relegation zone.

Espanyol played a man down from the 16th as Bernardo Espinosa was shown a straight red card for elbowing an opponent.

Mallorca had 15-year-old Luka Romero as an option on the bench for the first time, but the attacking midfielder — born in Mexico from Argentine parents — did not enter the match. The youngster who is being dubbed by local media as the “new Messi” had a chance to become the youngest player to play in the Spanish league. He is about a month younger than Francisco “Sansón” Bao Rodríguez was when he set the record by debuting with Celta Vigo in 1939-40.