Met Opera strikes deal with chorus ahead of restart 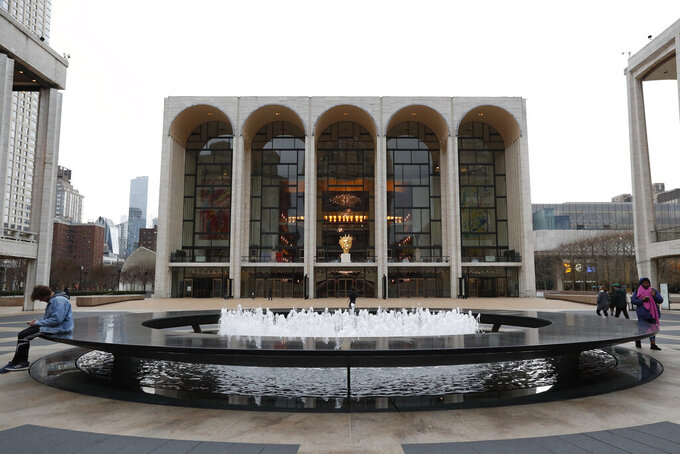 FILE - This March 12, 2020, file photo shows Josie Robertson Plaza in front of The Metropolitan Opera house, background center, at Lincoln Center in New York. On Tuesday, May 11, 2021, the Metropolitan Opera reached a tentative agreement on a four-year contract with the American Guild of Musical Artists, one of three major labor deals needed for the New York company to resume performances in September. (AP Photo/Kathy Willens, File)

NEW YORK (AP) — The Metropolitan Opera reached a tentative agreement Tuesday on a four-year contract with the American Guild of Musical Artists, one of three major labor deals needed for the New York company to resume performances in September.

The deal for the chorus, singers, dancers, actors, stage managers and staff directors would start Aug. 1, if ratified in a vote scheduled May 24. The new contract would start following the expiration of the current contract.

Still without deals are the unions for the orchestra and the stagehands. The Met's contract with Local 802 of the American Federation of Musicians expires July 31 and its agreement with Local One of the International Alliance of Theatrical Stage Employees expired last July 31. The Met locked out Local One on Dec. 8 and has said it was exploring the use of outside workers to start construction of sets for next season’s new productions.

Unions and their members complained when the Met stopped paying employees on March 31 last year, because of the coronavirus pandemic. The Met said at the time it was continuing benefits but could not afford to pay unionized employees without the revenue from performances.

The company used nonunion musicians for its streamed concerts from Europe, angering the musicians union.

The Met started bridge payments to AGMA on Feb. 8 and to local 802 March 17 ahead of negotiations. The Met said Local One is not receiving bridge payments.

“I am grateful to the Met’s AGMA employees, who play such an essential role in the company’s artistic life, for working so constructively with the Met’s management team over the past 14 weeks of intense negotiations and for recognizing the extraordinary economic challenges the Met faces in the coming seasons,” Met general manager Peter Gelb said in a statement.

The AGMA negotiating committee said in a statement that preparations for the negotiations started last summer “during the hardest time of our lives and careers.”

“Now, we are filled with hope as we see New York City coming back to life,” the negotiators said. “We are so excited to return to a better, safer, more equitable Met.”

The company has not performed since March 11, 2020, because of the pandemic, canceling 276 performances plus an international tour scheduled for next month.

The Met hopes to resume with a Verdi Requiem on Sept. 11 to mark the 20th anniversary of the terrorist attacks. Next season remains scheduled to start on Sept. 27 with the Met premiere of Terence Blanchard’s “Fire Shut Up in My Bones.”