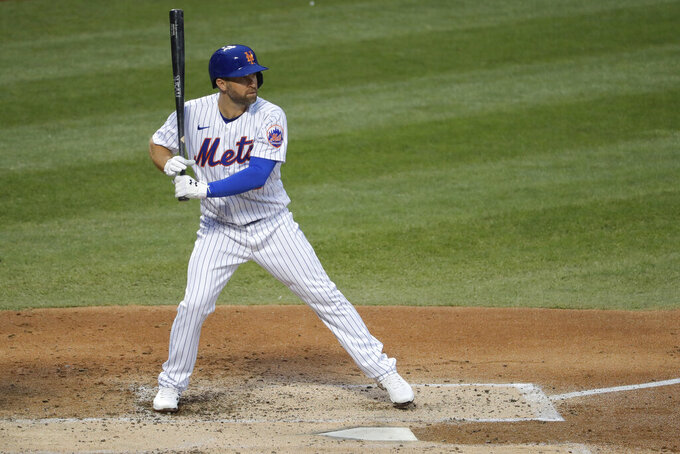 New York Mets' Brian Dozier gets ready for a pitch during the second inning of the baseball game against the Boston Red Sox at Citi Field, Thursday, July 30, 2020, in New York. (AP Photo/Seth Wenig)

NEW YORK (AP) — Not long ago, Brian Dozier wasn’t even sure he wanted to play this season.

Once he made up his mind and joined the New York Mets, it didn’t take long to crack the starting lineup.

The veteran second baseman was summoned to Citi Field from the team’s alternate training site in Brooklyn as the Mets made a flurry of roster moves before Thursday night’s series finale against Boston. New York placed reserve infielder Eduardo Núñez on the injured list with a bruised left knee and selected Dozier, who was signed to a minor league contract last week.

The Mets recalled left-handed reliever Daniel Zamora from their alternate site, while right-hander Hunter Strickland was designated for assignment. The team also confirmed it signed catcher Bruce Maxwell to a minor league deal the sides agreed to Tuesday, pending a physical and intake screening for the coronavirus.

Before this season, Maxwell was the only major league player to kneel during the national anthem to protest racial injustice. The 29-year-old Maxwell, who is Black and was born in Germany, will report to the alternate site in Brooklyn.

The right-handed-hitting Dozier batted seventh Thursday night as regular second baseman Robinson Canó was rested against Red Sox lefty Martín Pérez. Dozier was called out on strikes in his first plate appearance with the Mets.

Dozier’s wife is around 18 weeks pregnant with their second child, and he said he was “kind of back-and-forth” and leaning toward not playing this season until his wife helped convince him otherwise during a month of quarantine together. She and their 11-month-old daughter plan to join him in New York in about two weeks.

“She kicked me out of the house and said you need to start playing,” Dozier said, calling it a good decision. “So we’re here.”

The 33-year-old Dozier said he also spoke to good buddy Ryan Zimmerman of the Nationals, who opted out of playing this year due to the pandemic.

“We kind of bounced a lot of things off each other,” Dozier said. “It was a tough decision. It really was."

Dozier signed a minor league contract with San Diego in February that would have paid him $2.2 million in the majors. He called his unpleasant experience with the Padres a “debacle” and said it took a while to get out of the deal.

Dozier was released this month and said he received interest from four or five teams while working out back home in Mississippi. He chose the Mets — partly because of how they’re handling the coronavirus pandemic, and safety measures they have in place.

“Whatever the team needs to try to win, I’m here,” Dozier said.

Maxwell began kneeling for “The Star-Spangled Banner” late in his rookie season with the Oakland Athletics in 2017, about a year after San Francisco 49ers quarterback Colin Kaepernick sparked the protest movement in the NFL.

Numerous big leaguers have taken up the protest this season amid nationwide discourse over social justice.

Maxwell was arrested in October 2017 and pleaded guilty to a disorderly conduct charge after police said he pointed a handgun at a woman who delivered food to his home in Scottsdale, Arizona. He was sentenced to two years of probation in July 2018.

Oakland designated Maxwell for assignment in 2018 after he batted .182 in 18 major league games and released him after the season. He hasn’t appeared in an affiliated major or minor league game since. He spent last year in the Mexican League, batting .325 with 24 home runs and 112 RBIs in 109 games.

Van Wagenen said the club is always seeking major league-caliber depth pieces and indicated Maxwell was appealing behind the plate because of his left-handed pop and big league experience. Van Wagenen said a trusted scout recently went to watch Maxwell work out and was impressed with his defensive agility as well.