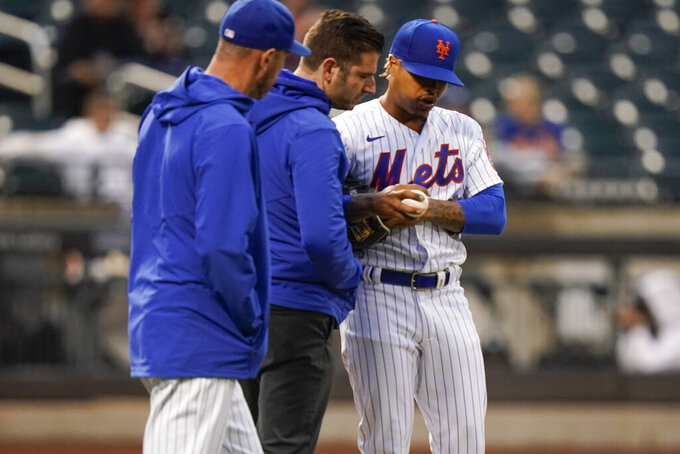 NEW YORK (AP) — Marcus Stroman has a sore hip, Michael Conforto's return was delayed due to coronavirus concerns and Joey Lucchesi is out for the season.

The hits just keep on coming for the injury-riddled New York Mets.

Stroman, the team's most durable starting pitcher this season, exited Tuesday night's outing against Atlanta in the second inning because of an aching left hip.

Conforto is ready to come off the injured list, but the right fielder wasn't activated Tuesday after Triple-A Syracuse's scheduled game was postponed to allow for more COVID-19 testing and contact tracing within the organization. Conforto spent last weekend on a rehab assignment with Syracuse, so the Mets said they decided not to reinstate him Tuesday “out of an abundance of caution.”

The team said Conforto tested negative Tuesday night and it plans to activate him before Wednesday's series finale against the Braves. He has been sidelined since straining his right hamstring on May 16.

Lucchesi, however, is headed for Tommy John surgery, the Mets confirmed. The left-hander had solidified a spot at the back of the rotation by posting a 1.19 ERA over his previous five starts.

Stroman threw 18 pitches in a hitless first inning and fell behind Austin Riley 2-1 leading off the second before manager Luis Rojas and a trainer visited the mound.

With the entire infield and plate umpire Pat Hoberg gathered around Stroman, the right-hander consulted with Rojas and the trainer while making throwing motions. Stroman threw one warmup pitch to catcher James McCann before another extended consultation.

Stroman then threw two more warmup pitches and continued talking with everyone at the mound — this time in a group that included first base umpire Ron Kulpa — before walking off .

Prior to Tuesday, Stroman had lasted at least six innings in eight straight starts. He and left-hander David Peterson are the only Mets pitchers to take every scheduled turn this year. Two-time Cy Young Award winner Jacob deGrom spent two weeks on the injured list with tightness in his side — and exited two starts this month with arm ailments — while Carlos Carrasco and Noah Syndergaard have yet to pitch this season because of injuries.

Rojas said before the game he didn’t know who would start in Lucchesi’s place Wednesday night.

“We have guys that can go long in our bullpen if they get another day of rest tonight,” Rojas said.

Yennsy Diaz relieved Stroman and completed a walk to Riley — which was charged to Stroman — and then loaded the bases with none out before striking out three straight batters.

Rojas said on June 8 that Conforto was still a couple of weeks from beginning a rehab assignment. But he was able to resume baseball activities at Citi Field during the previous homestand and hit .182 in three rehab games for Syracuse last weekend.

“He’s actually exceeded our expectations,” acting general manager Zack Scott said Tuesday. “Hit all the kind of objective markers on his strength of his hamstring. He’s ready to go.”

Second baseman Jeff McNeil, who strained his left hamstring also on May 16, was activated Monday and delivered a pinch-hit single in the first game of a doubleheader against the Braves before starting the second game.

Lucchesi’s injury was another blow to a rotation that was already thin behind deGrom, Taijuan Walker and Stroman. Still, the unit has been splendid all season, a big reason the depleted Mets lead the NL East.

Lucchesi was placed on the injured list Saturday, one day after he threw 5 1/3 scoreless innings against Washington. An MRI revealed a significant tear of his left UCL and a second opinion Tuesday confirmed the diagnosis. He is scheduled to undergo surgery Thursday.

“Tough break for Joey and for the club,” Scott said. “He’s got a full tear, so it’s pretty cut-and-dry.”

Before the game, the Mets recalled reserve catcher Patrick Mazeika from Syracuse and optioned infielder-outfielder Brandon Drury to their top farm club. Right-hander Robert Stock was claimed from the Chicago Cubs and optioned to Triple-A.