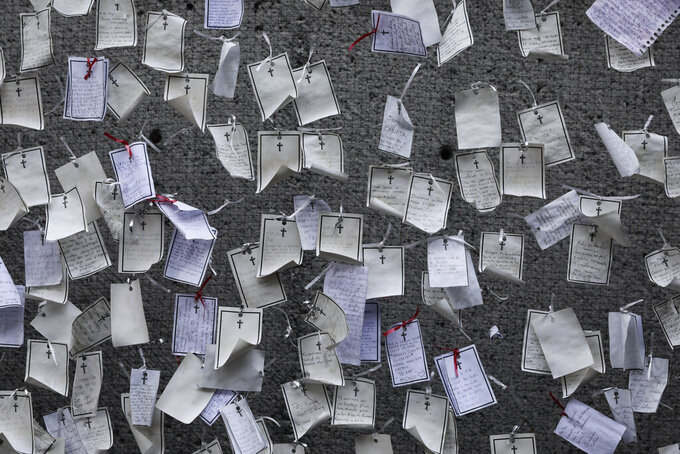 Messages written by loved ones and dedicated to the deceased hang from a wall at a memorial for COVID-19 victims installed outside the Basilica of Guadalupe in Mexico City, Wednesday, April 14, 2021. (AP Photo/Eduardo Verdugo)

Mexico’s medicines regulation agency said the false doses of Pfizer-BioNTech vaccine were found in February and had apparently been sold and administered.

Pfizer said in a statement it had detected counterfeit vaccines both in Mexico and Poland.

“We are cognizant that in this type of environment — fueled by the ease and convenience of e-commerce and anonymity afforded by the Internet — there will be an increase in the prevalence of fraud, counterfeit and other illicit activity as it relates to vaccines and treatments for COVID-19," Pfizer said.

Authorities in the northern border state of Nuevo Leon said they found three empty vials of fake Pfizer doses in February, suggesting that 15 to 18 people had gotten shots.

The Mexican government urged people not to try to get vaccines from online or private sellers, because all real vaccines are being distributed by the government.

However, there haven't been enough doses to go around, prompting some Mexicans to fall prey to fake vaccines, or travel to the United States to get vaccinated.