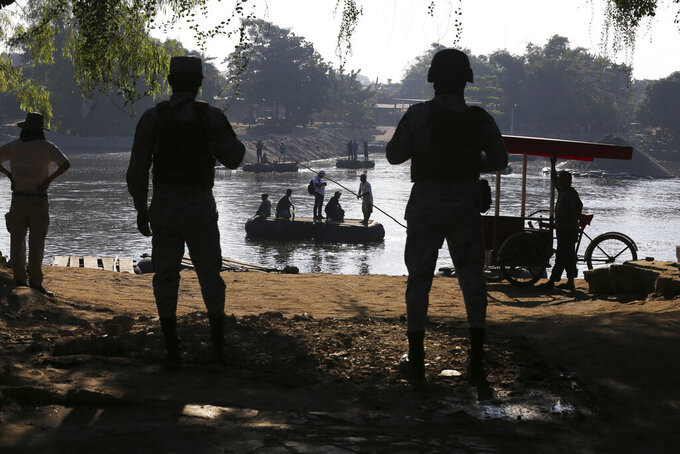 FILE - In this Jan. 24, 2020 file photo, Mexican National Guardsmen stand watch over the Suchiate River where locals transport cargo and ferry people between Mexico and Guatemala, near Ciudad Hidalgo, Mexico, a location popular for Central American migrants to cross from Guatemala to Mexico. On Friday, March 19, 2021, Mexico sent hundreds of immigration agents, police and National Guard officers marching through the streets of the capital of the southern state of Chiapas to launch an operation to crack down on migrant smuggling. (AP Photo/Marco Ugarte, File)

MEXICO CITY (AP) — In a rare show of force Friday, Mexico sent hundreds of immigration agents, police and National Guard officers marching through the streets of the capital of the southern state of Chiapas to launch an operation to crack down on migrant smuggling.

The parade Friday in the city of Tuxtla Gutierrez came one day after Mexico announced it was banning entry for nonessential travel on its southern border with Guatemala to prevent the spread of COVID-19. The restrictions went into effect Friday.

Mexico will deploy checkpoints and drones and station officers along the Suchiate River, which marks part of the border, to deter irregular entry. The crackdown is especially aimed at people travelling with minors.

“The Mexican government will carry out ... operations on the southern border to protect the rights and safety of migrant minors from several Central American nations who are used by criminal networks as a passport to reach northern Mexico,” Mexico’s National Immigration Institute said in a statement.

The institute said that since the beginning of the year, 4,180 minors, both accompanied and unaccompanied, had been found in Mexico without proper travel documents. Most came from Central America.

The institute said adults traveling with the minors said “guides” had advised them having children along would make it easier to enter Mexico and the U.S.

The institute said detentions actually began Thursday, when three freight trucks were stopped at a roadside inspection checkpoint near Tuxtla Gutierrez and a total of 329 Central American migrants were found crowded inside the vehicles.

The institute said 114 of the migrants were unaccompanied children, five were members of one family. Most were from Guatemala, and the remainder were from Honduras.

On Thursday, the United States said it would send 2.5 million doses of coronavirus vaccine to Mexico, where officials said Friday that the shipment would include 2.7 million doses but were coy about whether the two events were related.

Mexican officials struggled to explain why the measure was announced now, more than a year after the start of the pandemic.

Mexico’s assistant health secretary, Hugo López-Gatell, acknowledged Thursday that the decision was triggered by the increasing number of migrants entering from Central America.

“There was a verifiable increase in local inflows, particularly from Central America,” López-Gatell said when asked about the timing.

Mexico and the United States long ago imposed similar restrictions on Mexico’s northern border. But Mexico had previously been unwilling to impose them on the southern border or most flights entering Mexico.

The restrictions coincide with a huge uptick in the number of Central American migrants reaching the U.S border through Mexico. The number of migrants attempting to cross the U.S. border has been growing since April, with the 100,441 reported last month the highest level since March 2019.