Mexico to use trade deal to make sure workers get vaccine 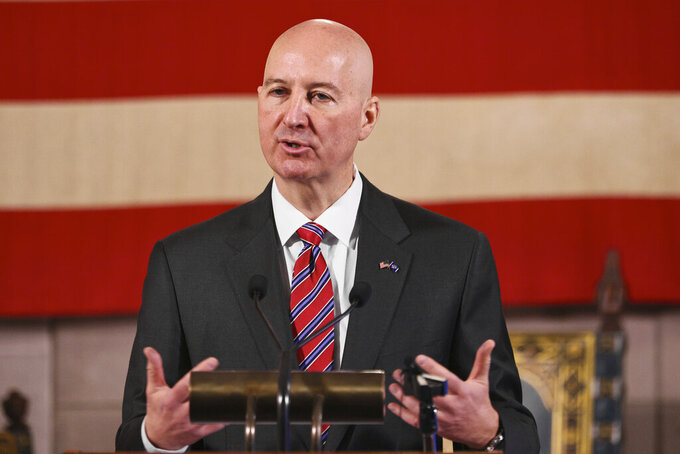 Nebraska Gov. Pete Rickets speaks during a news conference in Lincoln, Neb., Monday, Jan. 11, 2021. The number of people hospitalized with the coronavirus in Nebraska has continued to shrink this month. The state said there were 475 people being treated for COVID-19 Sunday in Nebraska hospitals. That was up slightly from the previous day but down from 517 at the start of January. The number of hospitalizations is less than half of the November peak, but it remains more than double where it was at the start of October. (AP Photo/Nati Harnik)

MEXICO CITY (AP) — Mexico said Wednesday it will invoke the labor section of the free trade agreement signed with the United States last year to pressure for its workers in the U.S. to have access to the COVID-19 vaccine regardless of their immigration status.

Foreign Affairs Secretary Marcelo Ebrard said that “it is an established right that the worker must not be exposed to infection.”

“It is a responsibility of each of the countries to guarantee that all workers, independently of their immigration status, receive the vaccine,” Ebrard said. The exclusion of any Mexican workers from vaccination programs would be considered a violation of the trade agreement, he said.

Immigrant workers’ access to the vaccine became an issue in Mexico last week following comments by Nebraska Gov. Pete Ricketts. The governor had been asked whether immigrants without papers working in the state’s meatpacking plants would be vaccinated.

Ricketts said: “You’re supposed to be a legal resident of the country to be working in those plants, so I do not expect that illegal immigrants will be part of the vaccine with that program.”

His spokesman later clarified with a statement saying, “Proof of citizenship is not required for vaccination.”

But some immigrant advocacy groups are still concerned that the messaging will discourage people in the country illegally from getting vaccinated.

Ebrard also said he would expect U.S. labor unions to support Mexico on the issue. The United States-Mexico-Canada trade pact, known as the USMCA, contains new rules and guarantees for labor rights.

Roberto Velasco, Mexico’s director general of North American affairs, said that “of course, the first thing we would do is to bring it between us and State Department, bring it up between governments.”

“Eventually, if we saw that it was necessary to start a procedure under the treaty to protest a violation of the rules, it would be a panel proceeding,” Velasco added, referring to panels of experts from various countries that eview disputes under the trade pact.