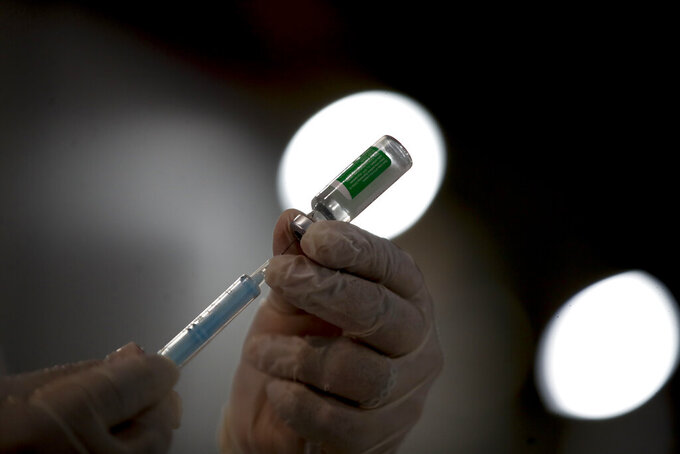 FILE - In this Feb. 24, 2021 file photo, a nurse prepares a dose of the AstraZeneca vaccine for COVID-19 in Buenos Aires, Argentina. Mexico's Foreign Relations Secretary Marcelo Ebrard said about 800,000 doses will be flown to Argentina in the last weekend of May 2021. Mexico will get a similar amount, and he expressed hopes that later shipments can be sent to other Latin American countries. (AP Photo/Natacha Pisarenko, File)

MEXICO CITY (AP) — Mexico’s top diplomat said Tuesday that shipments of a long-delayed lot of AstraZeneca vaccines will finally be sent to Argentina this weekend.

Foreign Relations Secretary Marcelo Ebrard said about 800,000 doses will be flown to Argentina. Mexico will get a similar amount, and he expressed hopes that later shipments can be sent to other Latin American countries.

The effort to fill and finish the vaccines at a Mexican plant took almost three months longer than originally expected.

Ebrard acknowledged Tuesday it had been “a long, complex, hazardous process," adding “we now finally, at last have this vaccine available.”

The vaccines were produced in bulk in Argentina and sent to Mexico for bottling. But the Mexican plant ran into problems, in part because it had difficulties in obtaining specialized filters.

The delay forced Argentina to look for another plant in the United States to perform the fill and finish operation. The first 843,000 doses from the U.S. plant arrived in Argentina on Monday.

Mexico, Argentina and other countries in Latin America were expecting millions of doses to start flowing in March, but probably won’t be able to start using them until June.

Previously, the Liomont plant in Mexico had problems getting in special filters and other equipment.

“They have fought a lot to obtain filters, inspection stations. They brought in very advanced equipment. That took time to be able to get them working,” Ebrard said during a visit to the plant. The project is supported by a foundation run by business magnate Carlos Slim.

Mexico already bottles the Chinese-developed CanSino vaccine at another plant, a process that went off with fewer hitches.