'Is Miami back?': Hurricanes may finally have a good answer 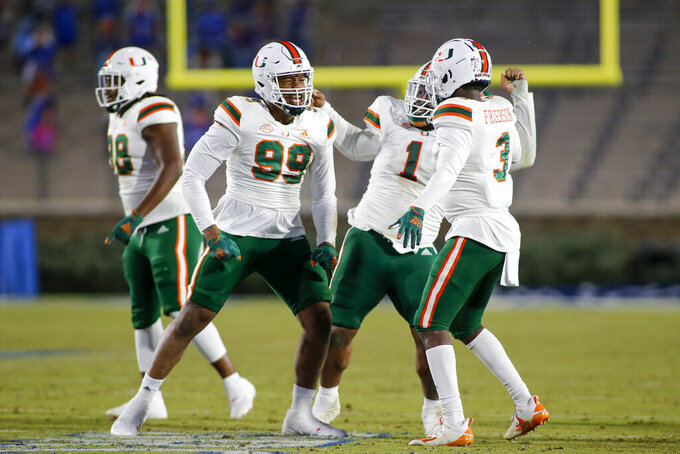 CORAL GABLES, Fla. (AP) — Miami coach Manny Diaz was coming back from a bout with COVID-19, as was quarterback D’Eriq King and several other players. The Hurricanes hadn’t practiced in two weeks, final exams were further limiting football time and a few starters still had to sit out amid health concerns.

Somehow, that all led to Miami’s most lopsided Atlantic Coast Conference win.

The annual question in Coral Gables — “Is Miami back?” — might finally have an answer Hurricanes fans will like. This won’t be the year where No. 9 Miami gets its first ACC championship, a drought that’s now 17 years and counting, but the Hurricanes (8-1, 7-1 ACC, No. 10 CFP) still have plenty to play for the rest of the way.

No. 20 North Carolina (7-3, 6-3 ACC) visits Miami on Saturday. Georgia Tech (3-6, 3-5 ACC with a game Thursday against Pittsburgh pending) is scheduled to play at Miami on Dec. 19. Win both of those, and the Hurricanes could play in the Orange Bowl on their home field on Jan. 2.

“I love this team,” said King, who transferred to Miami from Houston after last season. “I’m so glad I came here. I love the University of Miami. Just finishing the right way, that’s really, really, really important. Trying to get 10 wins this year ... it’s for the taking and, hopefully, a big-time bowl game.”

King passed for 248 yards, threw three touchdown passes and ran for another score in Miami’s 48-0 win Saturday at Duke. It was the biggest victory margin for Miami in its 137 all-time ACC games; the Hurricanes beat Wake Forest by 45 in 2004, Duke by 45 in 2005 and Florida State by 42 earlier this year. The last time Miami won a conference game by more than 48 points was 2001, when the Hurricanes topped Syracuse 59-0 in a Big East matchup.

A year ago, Miami finished 6-7, lost to crosstown rival FIU and was the only team that went to a bowl game and got shut out.

“If you think they’re having fun, it’s because they are,” Diaz said.

A Top 10 spot this year is certainly possible, especially if Miami wins out. And if Miami gets to 10 wins, it would also be only the second time that’s happened since 2003 — when the Hurricanes’ run of 14 double-digit win seasons in a 21-year span came to an end.

So, that question: “Is Miami back?”

Maybe this time it is.

“I just love the school," King said. “I’m going to do everything I can, everything we can as a team, to finish on the right foot.”