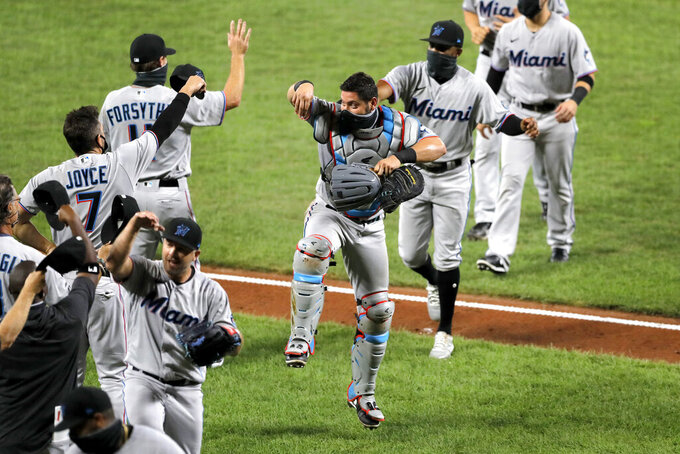 Also among the 18 players joining the Marlins' 30-man roster as they resumed their virus-disrupted season in Baltimore on Tuesday night were outfielder Monte Harrison and right-hander Jose Guzman, highly regarded prospects reaching the majors for the first time.

Another newcomer was pitcher Richard Bleier, returning to his former ballpark after being acquired from the Orioles in a trade over the weekend. He pitched a scoreless inning as the Marlins won 4-0.

“We’ve been through a lot,” manager Don Mattingly said. “It felt good to get out there.”

Before the game, starting pitchers Sandy Alcantara and Caleb Smith joined Jose Urena on the injured list, leaving the Marlins without three-fifths of their rotation. Eight of their 12 opening-day relievers were also on the IL, as was shortstop Miguel Rojas.

With more than half the team needing to be replaced, newcomers included infielder Eddy Alvarez a 30-year-old Miami native who won a silver medal in speedskating at the 2014 Winter Olympics and had yet to play in the majors.

In the wake of their ordeal, the Marlins are technically in first place in the NL East. At 3-1, they have the best winning percentage in the division.

Teams are scheduled for only 60 games each this season and it's possible not every club will play that many because of disruptions. In that case, with 16 of 30 clubs making the playoffs, the postseason field would be determined by winning percentage.

“We expect to win,” Mattingly said.

The Marlins put 17 players on the injured list, and starting second baseman Isan Diaz opted out for the rest of the season. Replacements included seven newly acquired players, and 11 players from the team's alternate training site.

Harrison was in the lineup in center field Tuesday night, as was 33-year-old newcomer Logan Forsythe as the designated hitter. Each went 0 for 3.

The virus infected 21 members of the Marlins' traveling party and forced the suspension of their season July 26 after just three games. The roster overhaul that has followed will test a farm system much improved since Derek Jeter's group bought the franchise nearly three years ago.

“We have been able to acquire layers of talent,” Hill said, "and while you never anticipate having to replace 18 players, it’s a credit to the work we've done organizationally to build depth to absorb what we are doing today.

“No one is making excuses. We know we have a job to do and we’re ready to go.”