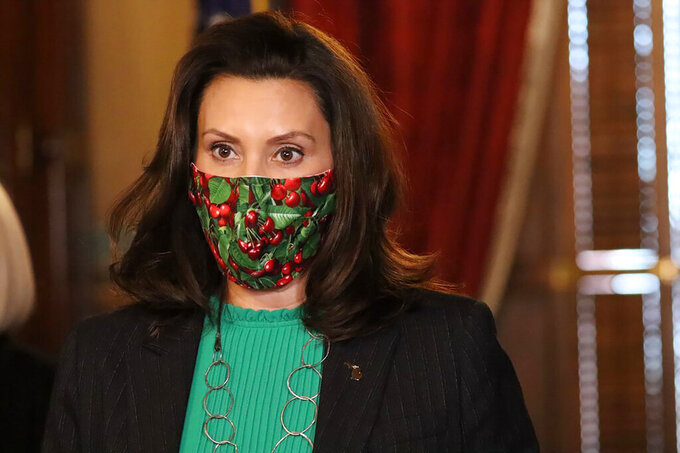 In this photo provided by the Michigan Office of the Governor, Gov. Gretchen Whitmer speaks during a news conference in Lansing, Mich., Thursday, Dec. 10, 2020. Whitmer, whose health department has prohibited indoor restaurant dining and closed various entertainment venues to limit the spread of the virus, announced that those businesses can postpone by a month their monthly sales, use and tax withholding payments that are due Dec. 20. (Michigan Office of the Governor via AP)

LANSING, Mich. (AP) — Michigan expects to receive about 257,000 doses of COVID-19 vaccines initially if the federal government authorizes them for emergency use this month, enough to immunize roughly 128,000 residents, a top doctor said Thursday.

The priority remains frontline health care workers and people living and working in long-term care facilities such as nursing homes, said Dr. Joneigh Khaldun, the state's chief medical executive. She will serve on a commission, created by Gov. Gretchen Whitmer, to raise awareness on the safety and effectiveness of coronavirus vaccines that get the green light.

A U.S. government advisory panel later Thursday endorsed mass use of Pfizer’s vaccine. A final decision and the first shots could follow within days. Later this month, the Food and Drug Administration is expected to pass judgment on another vaccine, developed by Moderna and the National Institutes of Health.

The federal government estimates Michigan will get approximately 84,000 doses from Pfizer and 173,000 doses from Moderna in their first shipments, Khaldun said. Both vaccines require two shots. State officials hope to distribute vaccines to the general public by late spring once production ramps up. Michigan has nearly 10 million people.

Whitmer, whose health department has prohibited indoor restaurant dining and closed various entertainment venues to limit the spread of the virus, announced that those businesses can postpone by a month their monthly sales, use and tax withholding payments that are due Dec. 20. They will face no penalties or interest.

“It'll be uniquely equipped to help reinforce the importance that we all get vaccinated,” Whitmer said.

Lynn Sutfin, spokeswoman for the state Department of Health and Human Services, said that within two weeks of vaccines being shipped to Michigan, all hospitals and health departments will receive a shipment. Priority will go to paramedics and health staff who work on general hospital floors and in intensive care units and emergency rooms.

Forty-eight hospitals and 12 local health departments have ultra-cold freezers to store Pfizer's vaccine, she said. The state is finalizing a contract for dry ice so facilities without ultra-cold storage capabilities can store it.

Hospitalizations have dropped in six of the state's eight health care regions in the past week, Khaldun said. The statewide case rate has declined for nearly three weeks. The positivity rate, 14%, “has not changed significantly” in recent weeks and "is still quite high,” she said.

Deaths, which lag infections, average 123 a day, up from 85 two weeks ago, according to The COVID Tracking Project.

Whitmer, a Democrat, and the Republican-led Legislature are negotiating over her call for $100 million in state spending to help unemployed workers and small businesses struggling in the pandemic.