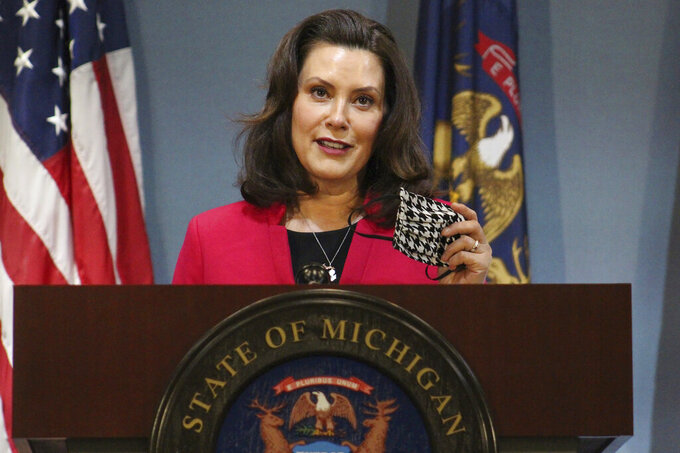 FILE - In this Thursday, May 21, 2020 file photo provided by the Michigan Office of the Governor, Michigan Gov. Gretchen Whitmer speeks during a news conference in Lansing, Mich. Gov. Whitmer on Friday, May 22, 2020, extended Michigan's stay-at-home order just over two additional weeks, through June 12, also keeping closed theaters, gyms and other places of public accommodation at least until that time. She also extended her emergency declaration through June 19. (Michigan Office of the Governor via AP, Pool) File

A day after a judge ruled in her favor in a lawsuit filed by the Republican-led Legislature, the Democratic governor also extended her coronavirus emergency declaration through June 19. Both the stay-at-home measure and state of emergency had been set to expire late next Thursday, though Whitmer said extensions were likely.

“While the data shows that we are making progress, we are not out of the woods yet. If we’re going to lower the chance of a second wave and continue to protect our neighbors and loved ones from the spread of this virus, we must continue to do our part by staying safer at home,” she said in a statement.

The state on Friday reported 5,158 confirmed deaths due to COVID-19 complications, which is the fourth-most of any state. The daily death toll rose by 29 and the number of new confirmed cases in the state increased by 403, to nearly 54,000 since the pandemic started.

For most people, the coronavirus causes mild or moderate symptoms, such as fever and cough that clear up in two to three weeks. For some, especially older adults and people with existing health problems, it can cause more severe illness or death.

Whitmer announced the extended stay-home directive to cap a week in which she cleared the way next week for medical and dental procedures that had been postponed and allowed groups of up to 10 people to gather. Retailers and car dealerships can soon reopen by appointment only.

Bars and restaurants remain closed to dine-in customers except in the Upper Peninsula and much of the northern Lower Peninsula, where they started reopening at 12:01 a.m. Friday at 50% capacity. The less populated regions have had few virus cases and deaths.

“It’s crazy. Why would you miss it?” Jon Mangrum told WPBN-TV as he waited to get into a bar in Traverse City late Thursday night. “This is like a historical moment almost when everyone first goes back out when things are allowed to be open.”

Nolen Sleder, who owns Brady’s Bar in Traverse City, had a message for people who are thinking of making a road trip: Stay away from her business.

“We deserve to feel safe and I would like to keep my staff and customers as safe as I can, and I’m asking that people from downstate don’t come in until they’re quarantined or their areas are also opened up,” Sleder said.

Whitmer's decision to lengthen the restrictions was criticized by the Michigan Chamber of Commerce. President and CEO Rich Studley tweeted that there is no end in sight for her "stay home, stay unemployed order.”

Michigan — with one of the country's most expansive lock downs — had 22.7% unemployment in April, which the U.S. Bureau of Labor Statistics reported Friday was second highest behind only Nevada.

The governor, who has let construction, manufacturing, real estate and landscaping restart, said thousands of people could die and hospitals will be overwhelmed “if we open too soon.”

Also Friday, the state Department of Corrections finished testing all 38,000 prisoners for COVID-19 with help from the Michigan National Guard. More than 3,200 tested positive and about 18,300 were negative, with 16,500 test results pending. Sixty inmates have died of the disease.

“When it comes to this virus, testing is critical to knowing exactly what you are dealing with and how to address it,” said the agency's director, Heidi Washington. “The vast majority of the prisoners we found who tested positive had no symptoms and were making it more challenging to control the spread of this illness."