Michigan has most virus cases in 2 months; Izzo backs masks 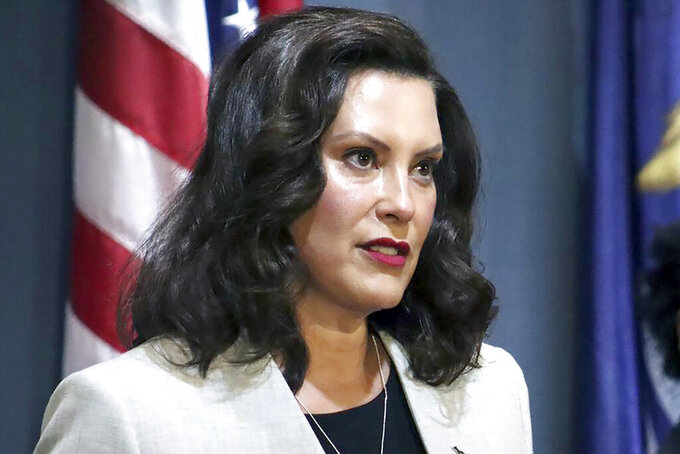 FILE - In a June 17, 2020, file photo provided by the Michigan Office of the Governor, Michigan Gov. Gretchen Whitmer addresses the state during a speech in Lansing, Mich. Whitmer on Tuesday, July 14, 2020, extended Michigan's coronavirus emergency declaration through Aug. 11, citing an uptick in new cases over the past three weeks. The move, which was expected, allows the Democratic governor to keep in place various orders designed to curb COVID-19, including certain business closures, limits on gatherings, a mask requirement and longer unemployment benefits. (Michigan Office of the Governor via AP, File)

LANSING, Mich. (AP) — Michigan on Wednesday reported its biggest increase in confirmed COVID-19 cases in nearly two months, leading Gov. Gretchen Whitmer to say she may be forced to reimpose some restrictions if the upward trajectory holds.

“I'm asking all the people in this great state ... to listen to the leadership,” said Izzo, who said he has been a "little disappointed” with how some residents have acted. “There's no task that we can't handle, especially when we tackle it together. So I'm asking everyone to join me in wearing a mask.”

The state health department reported 891 new COVID-19 cases, which was the highest number since May 14. It also reported four more confirmed or probable deaths from the disease, raising the state's death toll to 6,330.

Whitmer, a Democrat, said Michigan is at a “turning point" and “we're trying to hold on to staying in phase four,” which most regions of the state are in right now. Under phase three, a stay-at-home order was in place. There would not be in-person instruction when K-12 schools reopen, many on Sept. 8 but others earlier.

“If the numbers keep going where they're going, it's going to be very problematic and we may very likely have to take some steps backwards,” she said on a day the state reported that its unemployment rate fell to 14.8% in June, from 21.3% in May, amid a gradual economic reopening. Employment rose by 464,000 but was 556,000 below where it was before the pandemic. The jobless rate was slightly above its peak during the Great Recession.

“The reality is that true, lasting economic recovery is only possible through public health recovery,” Whitmer said, saying the rest of the state could join northern counties in phase five if “everyone masks up.” Auto plants, she warned, could be among businesses that are closed again.

There were roughly 71 new cases per 100,000 people over the past two weeks, which was a lower rate than in all but seven states. But Michigan’s seven-day case average as of Tuesday, 566, was up from the seven-day average of roughly 361 on June 30, according to an Associated Press analysis of data from Johns Hopkins University.

Lt. Gov. Garlin Gilchrist II said it is easy to think that although Michigan is seeing an uptick, it is “out of the woods” compared to places like Texas and Florida. “But we're not,” he said. “We need everybody to step up — wear a mask.”

The state reported increased testing, to 21,000 a day over the last week, but said tests were coming back positive at a rate of 3.4%, compared with 2.8% the previous week. National experts say 3% is the “cutoff” that “you really want to be under, so this is an indicator there is ongoing spread of the disease and that we're not simply seeing more cases just because we are doing increased testing,” said Dr. Joneigh Khaldun, the state's chief medical executive.

Whitmer enlisted the coaches' help days after toughening a mask requirement that some still refuse to follow and has sparked confrontations, including a deadly one Tuesday. She said masks should not be political. In legislative hearings held Wednesday, however, Democrats were far more likely to wear a face covering than Republicans.