Michigan health chief traveled out of state amid virus spike 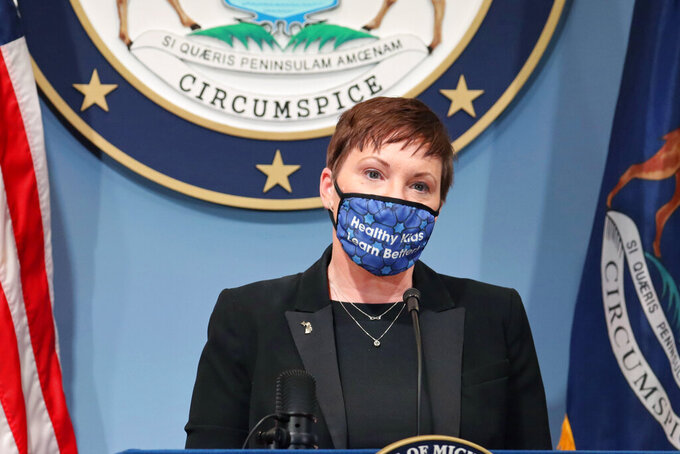 FILE - In this Feb. 4, 2021, file photo, provided by the Michigan Office of the Governor, Elizabeth Hertel, director of the state health department addresses the state, speaks in Lansing, Mich. Hertel traveled with family to Alabama for spring break last week despite her department's guidance to avoid out-of-state travel while Michigan suffers a raging coronavirus outbreak. (Michigan Office of the Governor via AP, File)

The trip was first reported by the Lansing-based publication MIRS. The disclosure came days after Breitbart News reported that a top aide to Democratic Gov. Gretchen Whitmer, chief operating officer Tricia Foster, traveled to Florida for spring break despite the governor's public “concern” about trips to that state.

Florida is the only state with more confirmed cases of a contagious variant than Michigan, which is confronting the highest two-week COVID-19 case rate in the U.S.

"Travel increases your chance of spreading and getting COVID-19. We recommend that you do not travel at this time,” the state Department of Health and Human Services, which Hertel has led since January, says in a document that was updated on April 5. The state recommends that people get tested after in-state, out-of-state or international travel.

“The department does not discuss the director's personal schedule,” DHHS spokesman Bob Wheaton said Wednesday, saying she would not do further interviews or issue a statement.

He said Hertel got her second vaccine shot Wednesday. Hertel, who is married to a state senator, told MIRS that they and their children drove to Gulf Shores, Alabama, where they stayed in a condo and took precautions such as wearing masks and keeping distance at the beach. She said she “was working the whole time.”

The governor's office has said Foster, who helps lead the state's operational response to COVID-19, is fully vaccinated.

The Centers for Disease Control and Prevention says fully vaccinated Americans can travel domestically without a pre- or post-trip test or quarantining.

They show “the arrogance and condescending nature of this administration,” spokesman Ted Goodman said. "Rules for thee, but not for me.”

As director, Hertel has signed pandemic orders keeping intact a mask requirement and easing but not lifting gathering limits and capacity restrictions at restaurants, movie theaters and other venues. She also has allowed contact sports to resume.

Whitmer told reporters “what directors do on their personal time is their business so long as they are safe, which is what we're asking everyone in the state to do.” She incorrectly stated there had never been any virus-related travel restrictions in Michigan. She issued stay-at-home orders a year ago that barred travel to vacation rentals for nearly two months.

“What we have done is ask people to be smart, to get vaccinated, to mask up,” Whitmer said. “That is the key to traveling with confidence that you're going to be safe and not expose yourself or your loved ones or your community.”

She also sought to dismiss criticism of the trips as “partisan hit jobs on my team.”