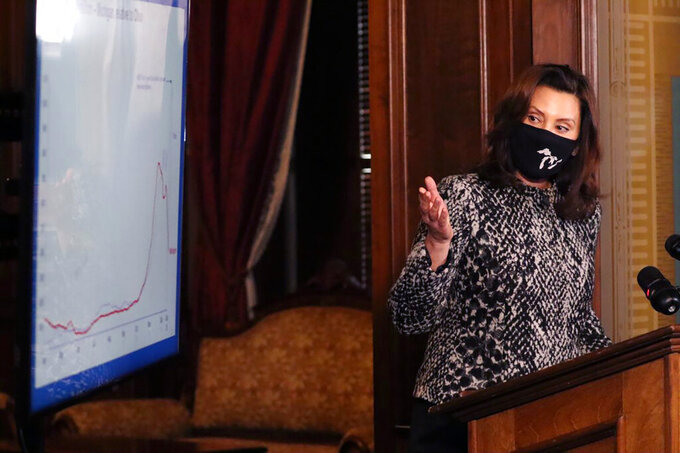 In a photo provided by the Michigan Office of the Governor, Gov. Gretchen Whitmer addresses the state during a speech in Lansing, Mich., Friday, Dec. 18, 2020. Whitmer's administration on Friday lifted a prohibition on in-person instruction at Michigan high schools and said movie theaters and other entertainment venues can reopen with capacity restrictions following a decline in coronavirus cases. Universities and colleges can let students return to campus next month, with a request to wait until Jan. 18, to restart face-to-face classes. (Michigan Office of the Governor via AP)

Universities and colleges can let students return to campus next month, with a request to wait until Jan. 18 to restart face-to-face classes.

Indoor restaurant dining will continue to be barred under the new state health department order that takes effect Monday, however, drawing criticism. Indoor sports and outdoor contact sports also will remain off limits, unless there is rigorous testing like there is at the pro and NCAA levels. Bowling alleys, casinos and other entertainment businesses that reopen must close drink and food concessions.

The order will last through Jan. 15, though the Democratic governor said she will seriously consider lifting some provisions sooner “if we substantially sustain our progress.” She and top health officials announced the revised measure at a news conference Friday afternoon.

“The curve is flattening. But we can't let our guard down for a second because our fortunes can change fast,” Whitmer said.

The restrictions began Nov. 18 following a spike in COVID-19 cases and hospitalizations statewide. All high schools and colleges have been virtual. Youth sports, including football playoffs, have been on hold. K-8 schools have been able to continue with on-site classes, though — as has been the case all fall — it is not required for them or high schools.

“The operative word in the order is ‘may’ — as school resumes after the holidays, these continue to be local decisions that must be guided by the latest safety information provided by public health authorities," two union presidents, Paula Herbart of the Michigan Education Association and David Hecker of AFT Michigan, said in a statement.

State health director Robert Gordon announced an antigen-testing program so the high school football, volleyball, and swimming and diving tournaments can be completed.

Michigan’s seven-day average of daily new COVID-19 cases is at 4,662, well down from 8,344 two weeks ago. The average positivity rate is 9%, a drop from 13.3% on Dec. 3, according to The COVID Tracking Project. Average daily deaths, which lag cases, have slightly risen from 124 to nearly 129 over two weeks. About 3,400 were hospitalized with virus-related symptoms on Thursday, a decrease from roughly 4,300 on Dec. 1.

“Michiganders did what they were supposed to do over the Thanksgiving holiday, and we avoided the surge that so many other states are seeing,” said Dr. Joneigh Khaldun, the state's chief medical executive and chief deputy health director. “While I'm still concerned that our cases are six times higher than they were at the beginning of September, things are certainly trending in the right direction.”

Critics, though, blasted Whitmer's continued ban on indoor service at restaurants. Since March, dining rooms will have been closed for 143 days by Jan. 15 — almost five months.

“She is unable or unwilling to tell small businesses what level of infection or hospitalization rate Michigan must achieve for them to reopen safely," said Sen. Dan Lauwers, a Republican from St. Clair County's Brockway Township. “Instead, workers, business owners and job providers are left waiting for press conferences, only then to simply be told they need to remain shuttered.”

The ban on dining has been met with some defiance. The state this week yanked liquor licenses and permits for an additional eight establishments for violations including in-person gatherings, dining and a lack of face coverings.