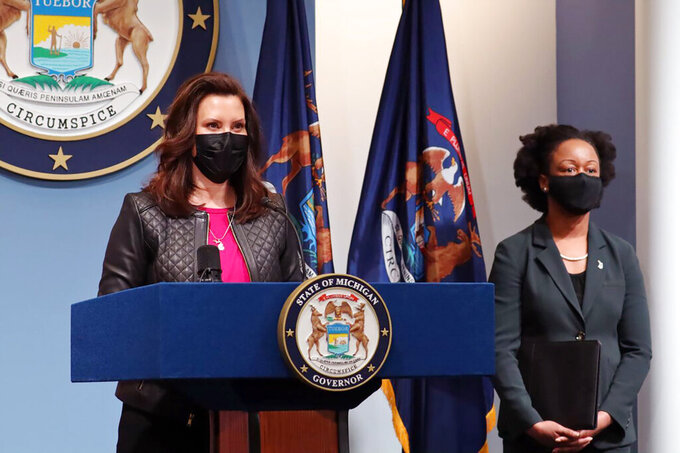 In a photo provided by the Michigan Office of the Governor, Gov. Gretchen Whitmer addresses the state during a speech, Friday, March 19, 2021 in Lansing, Mich. The state on Friday eased outdoor stadium capacity restrictions before baseball's Opening Day but ordered weekly testing of teen athletes amid a climbing coronavirus case rate that ranks fourth nationally over the past week. Gov. Whitmer said, for now, she does not plan to tighten COVID-19 restrictions — noting ongoing vaccinations while also citing concerns about virus variants that more easily spread. (Michigan Office of the Governor via AP)

Gov. Gretchen Whitmer said, for now, she does not plan to tighten COVID-19 restrictions her administration had gradually loosened in recent months — noting ongoing vaccinations while also citing concerns about virus variants that more easily spread.

“If we all take our own personal responsibility here, we can keep these things reengaged and do it safely,” the Democratic governor said during a news conference, in which a top state health official warned the state may be at the beginning of a third surge.

Under a revised health order that takes effect Monday, certain outdoor arenas and stadiums — including the Detroit Tigers' Comerica Park — can seat 20% of their capacity if they have an infection-control plan that complies with state guidance. The cap, which has been 1,000, will rise to around 8,200 for Tigers games.

Detroit was the 29th of 30 major league teams to announce its plans. Only Houston still had not. The Tigers said limited individual game tickets will be available on the team’s website beginning Thursday.

Starting April 2, all athletes ages 13 to 19 must participate in a free weekly coronavirus testing program. It previously had been voluntary except for school-sanctioned winter sports where masks are not recommended, such as wrestling. Testing also was used to finish the fall football, volleyball, and swimming and diving tournaments when they resumed in January.

Dr. Joneigh Khaldun, Michigan's chief medical executive, pointed to 315 outbreaks associated with sports teams in January and February. The Whitmer administration lifted a monthslong ban on contact sports in early February, days after frustrated parents and teens rallied at the Capitol. Restaurants reopened for indoor dining around that time, too.

“We want to identify any cases as soon as possible and prevent spread,” Khaldun said.

The order also will let people go unmasked at residential gatherings if everyone has been vaccinated, which aligns with recent guidance from the Centers for Disease Control and Prevention.

Michigan's COVID-19 case and positivity rates have been rising for a month. Related hospitalizations have gone up the past two weeks but remain well below peak levels. School-related outbreaks for the first time exceeded those in long-term care facilities, which Khaldun attributed to vaccinating staff and residents but also said speaks to the risk of children's activities such as sports.

“The most important thing we all want for our children is to have in-person learning and not have school closures,” she said.

Khaldun expressed concern about the state's virus numbers. From March 11 through Thursday, one of every 548 people tested positive — a rate that trailed only New Jersey, New York and Rhode Island.

“I know it's getting warmer, vaccines are rolling out and people are tired of this pandemic. But we're not out of the woods yet,” she said. “How this plays out depends on what we all do collectively to protect ourselves and our families.”

COVID-19 is suspected to have contributed to at least 16,800 Michigan deaths. The state on Friday reported 3,730 new cases, the most in a 24-hour period since early January.

At least 27% of people ages 16 and older have gotten at least one vaccine dose.

Dr. Anthony Fauci, the top U.S. infectious disease expert, told CNN on Thursday that Michigan should “hold off for a bit” on further relaxing restrictions.

“When you get the overwhelming majority of your population vaccinated, the chances of there being a surge are miniscule,” he said. “So just hang in there.”