Mickelson changes his mind, accepts exemption to US Open 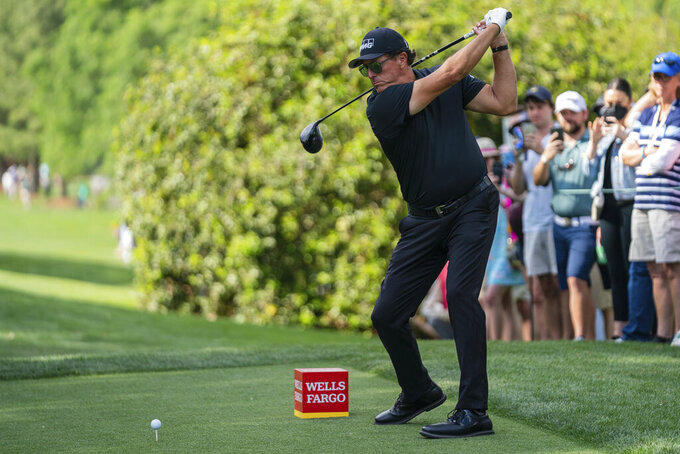 Phil Mickelson tees off on the 18th hole during the third round of the Wells Fargo Championship golf tournament at Quail Hollow on Saturday, May 8, 2021, in Charlotte, N.C. (AP Photo/Jacob Kupferman)

Phil Mickelson is assured at least one more crack at the major that has given him the most heartache. He accepted a special exemption Friday to play the U.S. Open.

Mickelson becomes the first player since Vijay Singh in 2010 to receive an exemption without having won the U.S. Open, and he's not without merit. He has won five majors — all of them except the U.S. Open — to go along with his 44 victories on the PGA Tour.

He has been eligible for every U.S. Open dating to 1994, but the 50-year-old Mickelson has fallen out of the top 100 in the world ranking. He had said in February 2020, a month before golf shut down because of the pandemic, that he would not accept an exemption even if the USGA offered him one.

He was prepared to go through 36-hole qualifying on June 7, a week before the U.S. Open returns to Torrey Pines in his hometown of San Diego.

“Winning the U.S. Open has been a lifelong and elusive dream, and I’ve come close so many times,” Mickelson said. "You can’t win if you don’t play. I’m honored and appreciative of the USGA for the opportunity and look forward to playing in my hometown on a golf course I grew up on.”

No one has suffered more in the U.S. Open than Mickelson, who needs only that major to complete the career Grand Slam. He holds the U.S. Open record with six runner-up finishes, and two moments stand out.

In 2006 at Winged Foot, he took a one-shot lead to the final hole when he missed the fairway well to the left and then curiously tried to hit 3-iron around a tree blocking his path to the green. It hit the tree, his third shot plugged in a bunker and he failed to get up-and-down, making double bogey to finish one shot behind.

And then at Merion in 2013, he had the 54-hole lead for the first time and was still leading when he hit wedge over the par-3 13th green and made bogey on the easiest hole. He made another bogey with a wedge in his hand from 121 yards away on No. 15 and closed with a third bogey to finish two shots behind.

He also was runner-up at Pinehurst No. 2 in 1999 when Payne Stewart made a 15-foot par putt on the last hole, twice at Bethpage Black (2002 to Tiger Woods, 2009 to Lucas Glover) and Shinnecock Hills in 2004 to Retief Goosen when Mickelson made double bogey on the 17th hole.

“Phil Mickelson’s incredible USGA playing record and overall career achievements are among the most noteworthy in the game’s history,” said Mike Davis, outgoing CEO of the USGA. “We are thrilled to welcome him to this year’s U.S. Open at Torrey Pines.”

Mickelson grew up playing the public course along the Pacific bluffs, and he is a three-time winner of the PGA Tour event at Torrey Pines. The last one was 20 years ago, and he has been critical of the redesign by Rees Jones to get the South Course ready for the 2008 U.S. Open.

He has not finished in the top 10 at the tour event at Torrey since a runner-up finish 10 years ago.

Mickelson tied for 18th in the 2008 U.S. Open at Torrey Pines, five shots out of the playoff won by Tiger Woods. Lefty curiously chose not to carry a driver that week on a course measuring 7,643 yards at sea level.

Mickelson failed to qualify for the U.S. Open in 1993, when he lost in a playoff for the final spot to a player who made a 50-foot putt on him. He didn't play at Erin Hills in 2017 because his oldest daughter was graduating from high school that week.

He was prepared to go through qualifying again, and was adamant about it at Pebble Beach in February 2020 when he said, "I am either going to get in the field on my own or I’ll have to try to qualify. I’m not going to take a special exemption.”

He made it to Winged Foot for the U.S. Open last September when the USGA had to eliminate qualifying because of the pandemic and expanded the world ranking exemption from the top 60 to the top 70. Mickelson was No. 66 at the time.

Mickelson has not always had the best relationship with the USGA, often criticizing the way the course is set up. He made his strongest point in 2018 at Shinnecock Hills, where a few pin positions were so difficult on baked-out greens that players had trouble keeping putts from going off the putting surface.

On the 13th hole in the third round, Mickelson’s putt went by the hole and he ran over and swatted it back toward the cup as the ball was still moving, an egregious violation. He was given a two-shot penalty and made a 10 on the hole.

He said last year his decision not to accept an exemption had nothing to do with his feelings toward the USGA. It was more about merit.

“If I get in, I deserve to be there. If I don't, I don't,” he said at the time. "I don’t want a sympathy spot. If I am good enough to make it and qualify, then I need to earn my spot there.”