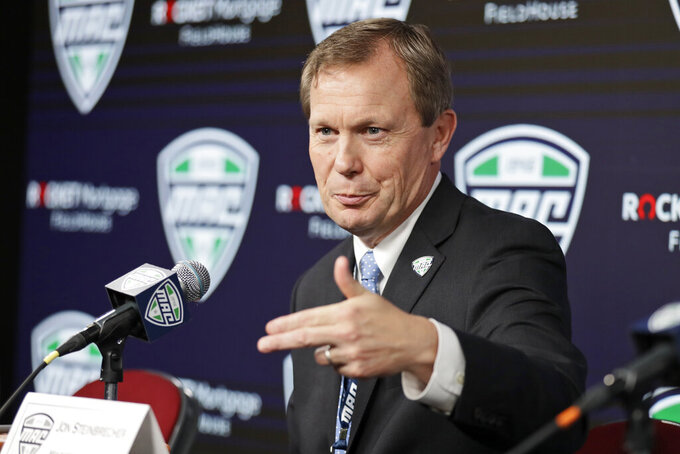 FILE - In this March 12, 2020, file photo, Mid-American Conference commissioner Jon Steinbrecher speaks to the mediain Cleveland. Aiming to recruit and engage more competitive video gamers, a dozen schools in the Mid-American Conference are creating a standalone esports conference to offer structured competition without the extensive rules that govern intercollegiate athletics. “There’s boatloads of kids out there that want to do this – well, they’re doing it already,” MAC Commissioner Jon Steinbrecher said. “And so to have some level of organization that provides for regular competitive opportunities that are well-run, on a regular basis, we think will give our schools a leg up in terms of attracting these students to their campuses.” (AP Photo/Tony Dejak, File)

That means the teams can enlist not just amateur players but a type prohibited in traditional college sports: competitors who already turned pro or made money from gaming, sometimes as teenagers years before college.

“There’s boatloads of kids out there that want to do this – well, they’re doing it already,” MAC Commissioner Jon Steinbrecher said. “And so to have some level of organization that provides for regular competitive opportunities that are well-run, on a regular basis, we think will give our schools a leg up in terms of attracting these students to their campuses.”

The Big East, Mountain West, Peach Belt and Metro Atlantic Athletic conferences already have esports competitions in at least one game, and there are teams or student clubs of gamers at scores more schools.

The new Esports Collegiate Conference, announced Wednesday, plans to be open to schools outside the Mid-American Conference and operate separately from it, though some MAC staff will help facilitate it, Steinbrecher said.

Organizers are still deciding what to play when the conference begins official action this fall. They say the spring season will feature competitions in League of Legends and Overwatch, with the champions getting automatic bids to national postseason tournaments for those titles.

The aim was a framework that operates much like varsity sports, with a few key differences, such as the game publishers setting their own rules, said Phill Alexander, director of the varsity esports program at Miami University in Ohio.

Esports Collegiate’s founding schools considered it important to keep the new conference separate from athletics, Steinbrecher said. The NCAA’s decision last year not to govern esports wasn’t much of a factor in that, but other considerations were, including legal and regulatory issues and the culture around gaming, he said. Another clear issue: the male-dominated gender dynamic of esports, which could complicate compliance with Title IX rules.

Esports Collegiate's organizers wanted to provide structured competition without over-regulating it, Steinbrecher said. It will have minimum equipment standards and guidelines for determining which games are acceptable, limit the number of people involved in each competition, and require that schools provide some oversight for their teams of full-time students, he said. But the universities will decide on the size of their teams, what coaching to provide, and whether to offer participants scholarships or other financial aid.

At Northern Illinois, which already has a student club of nearly 100 competitive and casual gamers and a dedicated space in a residence hall for practice and competition, the new conference's structure provides opportunities to build up a fan base and treat esports as a varsity sport, said Jeannine East, the university's esports project manager. That means the team — probably 20 or fewer players — will get coaching, practice regularly, and have access to academic support and even nutritional counseling, East said.

Organizers from the founding schools also envision more opportunities to tie into academics, such as degree programs related to the gaming industry. The new varsity team at Ball State University, where about 500 people participate in the esports club, will help bring esports experiences into education for digital sports production, business, animation and other fields, Paaige Turner, dean of the College of Communication, Information and Media, said in a statement.

Though the launch comes as many schools are facing budget tightening or cuts because of the impact of the COVID-19 pandemic, Steinbrecher said he anticipates the additional costs for the founding universities will be minimal because most already have the necessary equipment and infrastructure, and players don't have to travel to compete.

A spring exhibition season for the teams went well before it was cut short by the pandemic, and the students are stoked for conference play, East said.

“This is bringing legitimacy to the sport that they love to play and they work so hard to compete in,” she said.