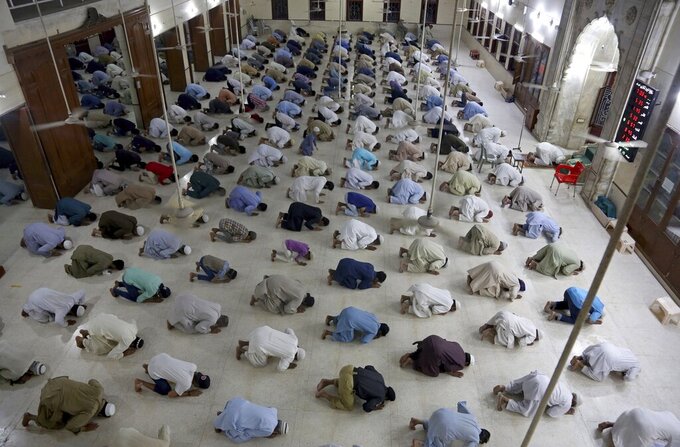 FILE- In this April 19, 2020 file photo, people attend evening prayers while maintaining a level of social distancing to help avoid the spread of the coronavirus, at a mosque in Karachi, Pakistan. The confirmed death toll from the coronavirus has gone over 50,000 in the Middle East as the pandemic continues. That's according to a count Thursday, Sept. 3, 2020, from The Associated Press, based on official numbers offered by health authorities across the region. (AP Photo/Fareed Khan, File)

DUBAI, United Arab Emirates (AP) — The confirmed death toll from the coronavirus passed 50,000 in the Middle East on Thursday, according to a count from The Associated Press based on official numbers provided by health authorities.

Those numbers still may be an undercount, though, as testing in war-torn nations like Libya and Yemen remains extremely limited.

The top U.N. official for Libya on Wednesday warned the coronavirus pandemic in the war-ravaged country appears to be “spiraling out of control.” Yemen's Houthi rebels, who control the capital, Sanaa, and much of the north, have refused to release virus statistics.

The hardest-hit nation remains Iran, which saw the region's first major outbreak. Over 21,900 people have died there from the virus, with over 380,000 confirmed cases and 328,000 recoveries.

Also Thursday, Israel announced plans to impose strict lockdowns on cities with major outbreaks after it reported a record 3,000 new cases in a single day. The country had largely contained its outbreak last spring after imposing strict lockdown measures. But infections have skyrocketed since the economy was abruptly reopened in May.

The government, which has faced widespread criticism for its handling of the pandemic, said new lockdowns would be imposed in so-called “red” cities. Israeli media say several cities and towns, including many Arab and ultra-Orthodox Jewish communities, are on the list.

“We’ve decided to imposure closures on red cities,” Prime Minister Benjamin Netanyahu said in a video statement Thursday. “I ask for the cooperation of all citizens to put the brakes on the spread of the sickness.”

The exact details of the plan were not yet known, but the lockdowns are expected to resemble those imposed countrywide in the spring, when schools and most businesses were closed, and people were only allowed to leave home to buy food and medicine.

The United Arab Emirates, which has embarked on a mass testing campaign, saw its highest daily number of new cases in over three months. That came as schools have reopened in the country and Dubai has offered itself as a tourist destination. The federation has reported more than 72,000 cases, including 387 deaths.

Beyond the Middle East, Pakistan’s numbers have continued to decline — befuddling expectations in mid-June, when even the authorities were anticipating a massive increase in cases. Pakistan has reported more than 297,000 infections and 6,328 deaths.

And in Afghanistan, the government has opened up recreational facilities and most businesses. But experts fear the real numbers are likely far higher than officially reported number of over 38,000 infections and 1,409 deaths.