Migrant caravan on the move in Honduras in uncertain times 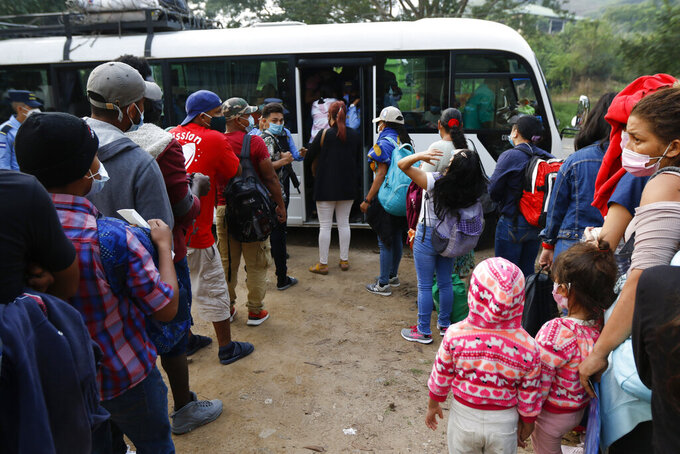 Honduran migrants trying to reach the U.S. border as a group board a public bus on the highway to Santa Barbara, early Friday, Jan. 15, 2021. The migrants left with little certainty about how far they will make it as regional governments appeared more united than ever in stopping their progress. (AP Photo/Delmer Martinez)

COPAN, Honduras (AP) — More than 1,000 Honduran migrants pushed their way into Guatemala Friday night without registering, a portion of a larger migrant caravan that had left the Honduran city of San Pedro Sula before dawn, Guatemalan authorities said.

Video shared by the Guatemala Immigration Institute showed cheering people streaming in while border agents looked on and tried to keep them from blocking traffic.

Honduran migrants began walking toward the Guatemalan border, driven by deepening poverty and the hope of a warmer reception if they can reach the United States border.

They quickly dispersed along the heavily trafficked highway toward border crossings in western Honduras, but estimates of their number ranged from 2,000 to more than twice that. Around 4 a.m., young men and entire families carrying sleeping children set out. Some quickly caught rides while others walked along the highway escorted by police.

Before the large breach, Guatemalan authorities had reported picking up only small groups of Hondurans and returning them to the border.

Mainor Garcia, a 19-year-old laborer from San Pedro Sula, carried a purple knapsack as he walked along the highway early Friday. He said he was scared about the journey, but willing to run the risk. “(Hurricanes) Eta and Iota destroyed all of our homes,” he said as he hustled on his way.

“There’s no choice” but to leave, said 25-year-old Oscar Zaldivar, a driver from Cofradia. “You have to leave here, this country because we’re going to die here.”

“The combination of COVID-19, social exclusion, violence and climate-related disasters that occur at the same time with a magnitude seldom seen before in Central America raises new humanitarian challenges,” the International Committee for the Red Cross said in a statement Friday.

The previous evening, Santos Demetrio Pineda was one of those who showed up at the San Pedro Sula bus terminal with little more than the clothes on their backs for the long, unlikely journey, made that much harder by the coronavirus pandemic.

“We lost everything in the hurricane,” said Pineda, referring to two Category 4 hurricanes that hit Honduras in November. “We can’t just sit around after what happened to us.”

“We are going to leave the country, to ask for help wherever they receive us,” he said.

The migrants leave with little certainty about how far they will make it. Regional governments appeared more united than ever in stopping their progress.

In a statement, Francisco Garduño Yáñez, head of Mexico’s National Immigration Institute, said, “We have to guarantee our national territory, an orderly, safe and legal migration with respect for human rights and with humanitarian policies.” He lashed out at those he said take advantage of immigrants and make a living from illegal immigration.

For weeks, a call for a new caravan departing Jan. 15 had circulated on social networks. But previous caravans have been turned back.

Guatemalan President Alejandro Giammattei on Wednesday night decreed a “state of prevention” along the country’s border with Honduras. The decree noted the threat of migrants entering without required documentation and without following pandemic-related screening at the border. Guatemala is requiring proof of a negative COVID-19 test. The decree said more than 2,000 national police and soldiers would be stationed at the border.

The Mexican government said Wednesday that it and 10 other countries in North and Central America are worried about the health risks of COVID-19 among migrants without proper documents.

The statement by the 11-member Regional Conference on Migration suggests that Mexico and Central America could continue to turn back migrants due to the perceived risks of the pandemic.

The group “expressed concern over the exposure of irregular migrants to situations of high risk to their health and their lives, primarily during the health emergency.”

On Thursday, Mexican officials said they discussed migration with U.S. President-elect Joe Biden’s pick for national security adviser, Jake Sullivan, and raised “the possibility of implementing a cooperation program for the development of northern Central America and southern Mexico, in response to the economic crisis caused by the pandemic and the recent hurricanes in the region.”

When hundreds of Hondurans tried to form a caravan last month, authorities stopped them before they even reached the Guatemala border. Other attempted caravans last year were broken up by Guatemalan authorities before they reached Mexico.