Migrants on the move again in Mexico and Central America 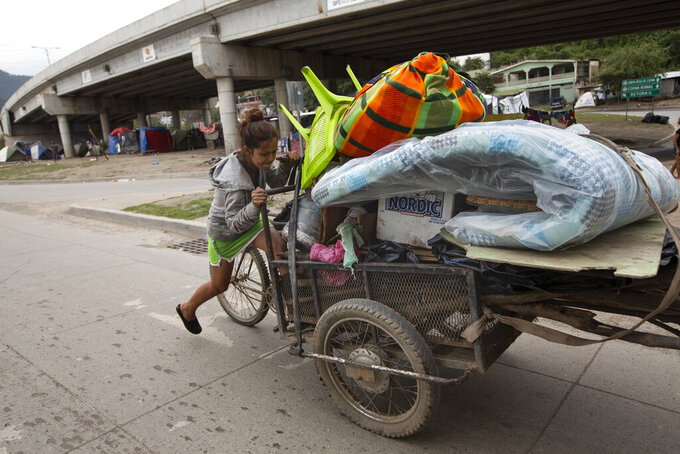 Floria Sarai Calix pushes her belongings in hopes of finding a safer area to camp out with her son after losing their home in the Chamelecon neighborhood to hurricanes Eta and Iota, on the outskirts of San Pedro Sula, Honduras, Monday, Jan. 11, 2021. The devastation wrought by November's hurricanes and the economic damage of the COVID-19 pandemic has added to the forces that drive Hondurans to migrate. (AP Photo/Moises Castillo)

TENOSIQUE, Mexico (AP) — In the first Mexican shelter reached by migrants after trekking through the Guatemalan jungle, some 150 migrants are sleeping in its dormitories and another 150 lie on thin mattresses spread across the floor of its chapel.

Only six weeks into the year, the shelter known as “The 72” has hosted nearly 1,500 migrants, compared to 3,000 all of last year. It has halved its dormitory space due to the pandemic. That wasn’t a problem last year because few migrants arrived, but this year it’s been overwhelmed.

“We have a tremendous flow and there isn’t capacity,” said Gabriel Romero, the priest who runs the shelter in Tenosique, a town in southern Tabasco state. “The situation could get out of control. We need a dialogue with all of the authorities before this becomes chaos.” In particular, he would like the government to assist with migrants who camp outside while they are full.

Latin America’s migrants — from the Caribbean, South America and Central America — are on the move again. After a year of pandemic-induced paralysis, those in daily contact with migrants believe the flow north could return to the high levels seen in late 2018 and early 2019. The difference is that it would happen during a pandemic.

The protective health measures imposed to slow the spread of COVID-19, including drastically reduced bedspace at shelters along the route, mean fewer safe spaces for migrants in transit.

“The flow is increasing and the problem is there’s less capacity than before to meet their needs” because of the pandemic, said Sergio Martin, head of the nongovernment aid group Doctors Without Borders in Mexico.

Some shelters remain closed by local health authorities and almost all have had to reduce the number of migrants they can assist. Applications for visas, asylum or any other official paperwork are delayed by the government’s reduced capacity due to the pandemic to process them.

“This is not a post-COVID migration; it is a migration in the middle of the pandemic, making it all the more vulnerable,” said Ruben Figueroa, an activist with the Mesoamerican Migrant Movement.

Some migrants have expressed hope of a friendlier reception from the new U.S. administration or started moving when some borders were reopened. Others are being driven by two major hurricanes that ravaged Central America in November and desperation deepened by the economic impact of the pandemic.

Olga Rodríguez, 27, had been walking for a month since leaving Honduras with her husband and four children, aged 3 to 8, after Hurricane Eta flooded the street vendors’ house. They arrived in Mexico and applied for asylum, but told it would take six months. Forced to sleep in the street, they changed plans.

“The children suffered cold, we got wet and I told my husband if we’re going to be in the cold and rain, better we walk,” she said from Coatzacoalcos. Now their goal is the United States.

President Joe Biden’s administration has taken steps toward rolling back some of the harshest policies of ex-President Donald Trump, but a policy remains allowing U.S. border officials to immediately send back almost anyone due to the pandemic. The U.S. government is concerned that the more hopeful message could set off a rush for the border and says it will take time to implement new policies.

The number of people apprehended at the U.S.-Mexico border in January was more than double that of the same month last year and 20,000 above January 2019. This week families have been seen crossing from Ciudad Juarez and turning themselves over to Border Patrol in hopes to applying for asylum.

“Wait in your country, or if you’re in Mexico, wait” until you can be sure you can cross legally, Roberta Jacobson, the White House’s lead advisor on the border, said recently.

Last week, the Biden administration announced that it would slowly start processing the approximately 25,000 asylum seekers who were forced to wait out their process in Mexico under Trump. That was scheduled to begin Friday at three border crossings.

Mexico has so far said it will continue enforcing an “orderly” migration, which in practice has meant trying to contain migrants in the south since Trump threatened tariffs on all Mexican imports in 2019.

On Tuesday, Mexico’s National Immigration Institute said in a statement that authorities had made 50 raids on freight train lines since Jan. 25 in southern and central Mexico, detaining nearly 1,200 migrants.

President Andrés Manuel López Obrador warned migrants recently to not be fooled by traffickers who promise that the U.S. will open its doors.

Isabel Chávez, one of the nuns who work at the migrant shelter in Palenque, some 60 miles (100 kilometers) from Tenosique, said they had to reduce the number of days migrants could stay there to a maximum of two because of the “avalanche” of migrants who arrived in January. There would be as many as 220 migrants there compared to the 100 they would see before the pandemic began in March 2020, she said.

In Tapachula, the largest Mexican city near its border with Guatemala and home to Mexico’s biggest detention center, there are signs of the increase as well. “There are more people applying for refuge and the increase in migrants is evident in the city’s public spaces,” said Enrique Vidal Olascoaga, lawyer for the nongovernmental organization Fray Matías de Córdova, which helps migrants with legal procedures.

César Augusto Cañaveral, the director of the Belén shelter in Tapachula, lamented having to close the doors of the shelter after it filled in late January.

“Now we take food out to the street and some sleep outside,” but that has concerned the shelter’s neighbors, who worry about the risk of COVID-19 infections. “This is going to be more complicated than (the wave of migrants in) 2018, because the cherry on top is COVID-19,” he said.

Now, more than 1,300 miles to the southeast, some 1,500 migrants spread across various camps in Panama have their sights set on getting to Tapachula, either as a temporary stopover en route to the U.S. border or to begin the asylum process in Mexico.

Panama reopened its border in late January and ever since, groups have been walking out of the dense Darien jungle that divides Panama and Colombia. The government has been shuttling them to other camps closer to the Costa Rica border to make space for new arrivals.

Last week, Guatemalan immigration officials warned that a new migrant caravan could be forming in coming days in Honduras. In January, Guatemalan authorities blocked the year’s first caravan, sending nearly 5,000 Hondurans back to their country over a 10-day span.

But while Guatemala was focused on the caravan, other migrants were moving north as always in small, discreet groups. It was during the caravan last month that shelters in southern Mexico began seeing their numbers increase with mostly Honduran migrants.

Small groups of migrants are more vulnerable to criminals who kidnap and extort them, said the activist Figueroa.

Most invisible are those paying smugglers who stuff them into trailers like the one that Mexican authorities stopped in Veracruz this week. Inside were 233 migrants, mostly from Guatemala.

In late January, 19 bodies, shot and burned, were found inside a pickup truck near the Mexico-Texas border. Most were believed to be Guatemalan migrants. A dozen state police officers were arrested in connection with the case.

“We foresee an increase in violence,” said Sergio Martin of Doctors Without Borders, noting that despite the pandemic migrants continue to be pushed into moving clandestinely.

Just down the border from where the bodies were found, the Rev. Francisco Gallardo, director of the migrant shelter in Matamoros, said he had recently made arrangements for two pregnant women to deliver their babies in the Mexican city.

“Two families with two women eight months pregnant just crossed the river” into the U.S., he said, referring to the Rio Grande that divides the two countries. “They already had their smuggler and decided to risk it.”

Back in southern Mexico, migrant Edilberto Aguilar continued walking. “This is a chain,” said the 33-year-old Honduran. “One day we arrive and tomorrow others arrive. This never ends.”