Military coup yet another blow for Myanmar's sagging economy 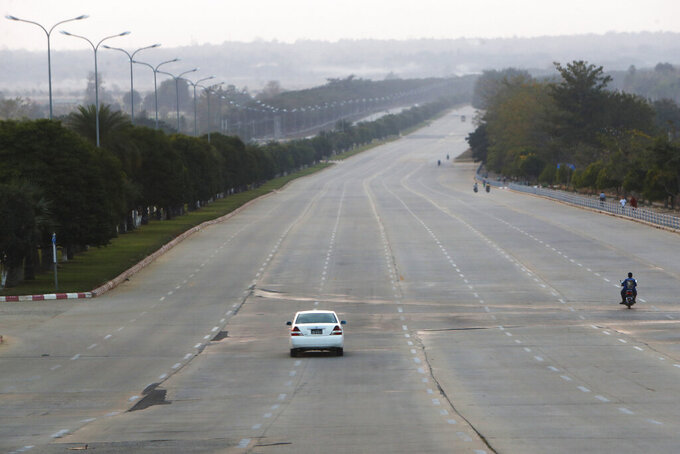 FILE - In this Feb. 1, 2021, file photo, vehicles make their ways on a road in Naypyitaw, Myanmar. The military coup in Myanmar is unlikely to do the country’s struggling economy any good at all. The country once considered a promising last frontier has languished as the pandemic added to its challenges. (AP Photo/File)

BANGKOK (AP) — The military coup in Myanmar is unlikely to do the country’s struggling economy, once considered a promising “last frontier,” any good at all.

Myanmar's economy has languished as the pandemic added to its challenges and the prospect of fresh Western sanctions in the wake of this week’s army takeover will only make things tougher for those on the ground, economists say.

It’s unclear if China might help make up for lost business due to the increased political risks and potential for turmoil if public anger over the ouster of massively popular Aung San Suu Kyi and fellow civilian leaders erupts in mass protests.

Apart from raising the risk of political unrest, economic sanctions and other disruptions, the coup likely will prove to be a huge setback to efforts to improve Myanmar’s investment environment, curb crony capitalism and build a more sustainable path to growth.

“With this kind of situation the sad thing is that you don’t even need to put sanctions in place because the dire economic consequences of the conflict, combined with what happening now makes the country look very unstable and not the right place to invest right now. So the repercussions are immediate,” said Laetitia van den Assum, a former diplomat and a member of the Advisory Commission on Rakhine State, which was set up by former U.N. Secretary General Kofi Annam to improve Myanmar's treatment of minority Rohingya Muslims.

The military seized power shortly before a new session of Parliament was to convene on Monday, declaring its actions were legal and constitutional because Suu Kyi’s government had refused to address voting irregularities in November's election, which her National League for Democracy won in a landslide.

That provoked a rush to ATMs and food stalls. TV signals were cut and passenger flights were grounded. Authorities urged calm, while moving to suppress dissent through Facebook and other social media.

Meanwhile, the central bank promised it would not demonetize any of the currency, a reasonable fear: three past demonetizations provoked much anguish and anger.

“The general public can continue using the banknotes and banking services without any worries, and all the banks have been instructed to provide regular banking services," the Central Bank of Myanmar said in a notice.

The economy already was faltering before the pandemic. Sian Fenner of Oxford Economics estimates the coup will likely cut growth this year by half, from an earlier forecast of 4.1% to 2%.

The economy's performance fell short of popular expectations as growth benefited a tiny part of the population and reforms took a back seat to efforts to end decades of ethnic civil conflict. Tourism has suffered and new sanctions were imposed following a 2017 counterinsurgency campaign that drove about 740,000 of the mostly Muslim Rohingya to flee the country.

Min Aung Hlaing is one of four generals who were blacklisted by the U.S. Treasury Department for the military's abuses in Rakhine and other ethnic majority regions.

Given the recurring risks of falling afoul of such sanctions, many U.S. companies have held back on major direct commitments, instead opting for local partnerships. Fast food giant Yum! Brands Inc., for example, opened its first Kentucky Fried Chicken outlet, a franchise with local partner Yoma Strategic Holdings, in downtown Yangon last year.

“We will work with our partners to support restoration of democracy and the rule of law, and impose consequences on those responsible," he said in a speech to State Department employees on Thursday.

The potential impact of sanctions would depend on how far-reaching they are. Many Western brand names, including Samsonite, LL Bean, H&M and Bass Pro, have suppliers in Myanmar, based on shipping data from Panjiva.

Exports of clothing, shoes and other consumer goods are a vital source of growth. They doubled after the European Union in 2015 began allowing preferential imports from Myanmar under an “everything but arms" arrangement in recognition of the country's progress toward democracy.

The garment and textiles sector employs 450,000, mostly women, in more than 600 factories, according to the Myanmar Garment Manufacturers Association.

“The development of a competitive low-end manufacturing sector has traditionally been the route out of poverty for low-income countries in Asia, so throttling textiles would have lasting repercussions," Gareth Leather of Capital Economics said in a report.

Japan's Kirin Holding Co. announced Friday it was ending its joint venture with the military-linked conglomerate Myanma Economic Holdings PLC, whose board is entirely composed of military leaders.

“Given the current circumstances, we have no option but to terminate our current joint-venture partnership," Kirin said. “We will be taking steps as a matter of urgency to put this termination into effect."

The military, which had ruled Myanmar for five decades, does not have a strong track record on handling the economy. Beginning in the 1990s, foreign investment rose as the leadership began sporadic efforts to modernize and reopen the economy.

Business and tourism revived as a result of a transition to a civilian, quasi-democratic government a decade ago. Poverty dropped from about half of the population to just over a quarter, according to the World Bank. But rural areas, home to about 70% of the population, still lag far behind.

The coup threatens the short-term outlook for investment and foreign business, but also the longer-term potential for growth, says Fenner of Oxford Economics.

It is likely to delay or perhaps derail the government's efforts to improve the business environment, build up a modern banking system and other financial industries, cut corporate taxes and move ahead with “strategic infrastructure projects,” he noted.

Myanmar has made progress in some areas in recent years, including compliance with anti-money laundering standards, opening a stock exchange and enacting a financial institutions law. The government was preparing to implement a medium- to long-term economic resilience and reform plan after the election.

But the military has retained ultimate control both of the government and much of the economy, enabling cronies to dominate lucrative trading in gems and other natural resources. Private businesses are starved of cash while investment in schools, health and other vital foundations of future growth has suffered.

“You need the kind of investment that helps you build and adapt to climate change, that helps you to make your economy more sustainable in the long run. You need innovation. And that’s not going to come from crony capitalism,” van den Assum said.